Once upon a time, I didn’t object much to Ohio State. Part of it’s because I always thought that Jim Tressel was a class act, but basically, while I have little interest and no real concern about the activities of other, lesser, conferences, it’s kind of hard for me to muster much passion or antipathy for what goes on in the Big Ten. Then they went and hired Urban Meyer and packed their schedule with a bunch of loser teams and had the audacity to announce that they were number two in the country and stood in the way of Auburn playing FSU for the title.

One Saturday last month, they had the Big Ten Championship game against Michigan State. Years ago, I worked a different job and got thrown under the bus by my team leader, who was a Spartan. Now, that’s a reason to hate a school. I held my nose and hoped the Spartans would just kick Ohio State like a dusty old rug. Six hours before kickoff, we went into Jeni’s Ice Creams and Marie almost asked for a sample of this flavor called Buckeye State before I intervened. I don’t know what the hell my wife is thinking sometimes.

Actually, just being in the place at all on gameday was downright bad voodoo. Jeni Bauer opened the first of her stores in Columbus, Ohio, in 2002. She joined a very crowded field of incredibly good Ohio-based ice cream companies and instantly stood apart from her peers with her extremely tasty and fun flavors. Her principles are not dissimilar to Morelli’s here in town: fun and complex flavors, with locally-sourced ingredients. They’re not inexpensive: a small cup or cone comes with two small scoops for $4.50. However, they are really, really good. 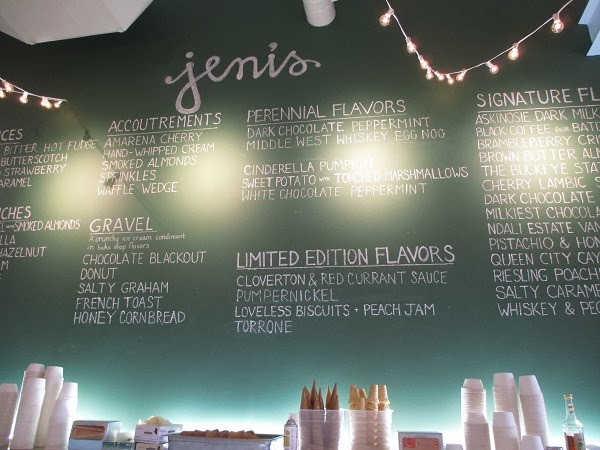 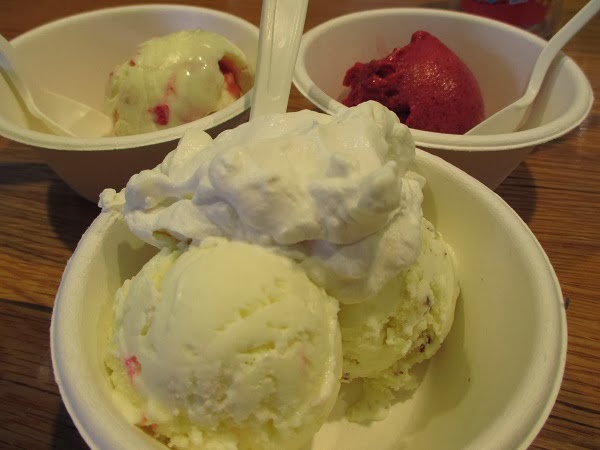 On the other hand, part of that $4.50 certainly covers the cost of all the samples that guests are sure to try. At Jeni’s, there are four to six limited editions, six perennial, and fourteen signature flavors at any time. Some of these are quite wonderfully unique. There’s a Loveless Biscuits and Peach Jam flavor right now, which is beautifully odd. 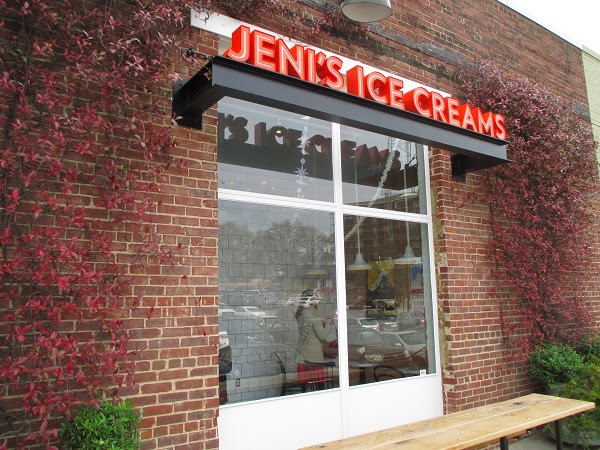 I went with a scoop of torrone – white chocolate, tupelo honey, and almonds – with a scoop of white chocolate peppermint. Since the good people here will split your small order into two cups, Marie had a scoop of cloverton with red currant sauce in one, and a cherry sorbet that the toddler enjoyed in the other. (Now there’s a money-saving tip for parents right there!)

It was a good afternoon snack and we did not jinx anything with our visit. Michigan State whipped the Buckeyes, clearing the way for Auburn to represent the SEC in the title game. Auburn lost, but my God, what a game. I can’t wait until next fall, when I can act like a superstitious lunatic all over again.

Other blog posts about Jeni’s Ice Cream in Atlanta: