This is Marie, contributing an article about a recipe I tried for Mustard Chicken. Here’s the original recipe that Grant found for me. This one didn’t turn out perfect, but it was intriguing enough to require a return for more experimentation. I want to tweak this a bit and make it work better.

I have been experimenting with changing lemon for other citrus when I cook. It’s been a bit of an adventure. With zest, it appears that everything can be pretty much one-for-one, as long as allowances are made for the size of the fruit, because although they taste different they are otherwise very similar. The juices all have different properties and will require a good bit of tweaking to make them work correctly. In this case I used the zest and juice of an orange instead of a lemon, and I didn’t remove enough of the zest to compensate for the size ratio between the orange and a lemon so it was more citrusy than mustardy. However, the meal was good anyway. 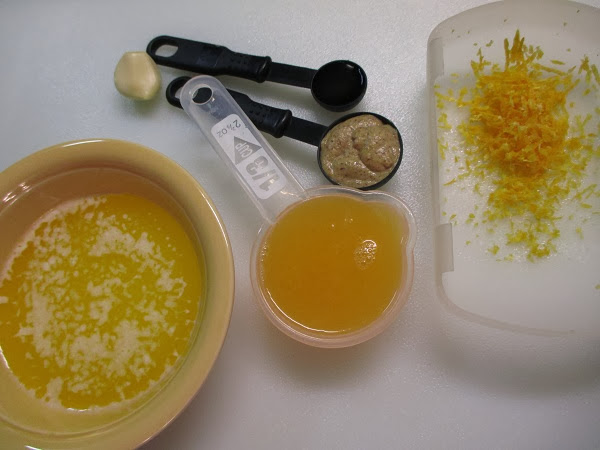 To prepare the chicken breasts I make diagonal slashes on the surface to get more of the marinade/sauce into them.

Combine all of the above ingredients and pour over chicken breasts in a baking dish. Bake in a 180deg oven until chicken is cooked. During cooking you can baste the chicken with the pan juices. 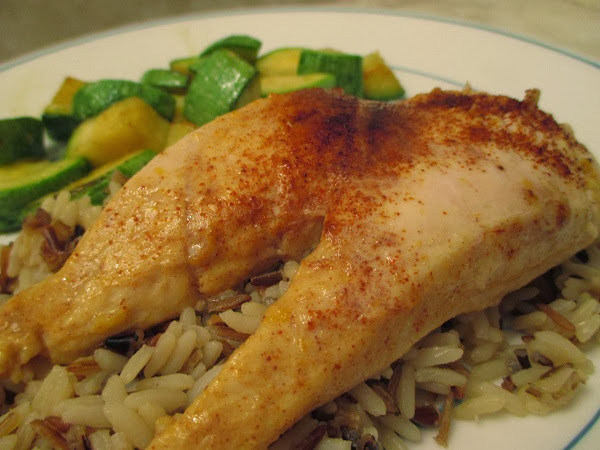 I combined the ingredients in one photo for the sauce: going clockwise from the garlic with the zest off to the side, you will see one teaspoon of Worcestershire sauce, one tablespoon of mustard, 1/3 cup orange juice (I increased the amount from the recipe to compensate for its sweetness so there would be more acidity, but next time I would keep the amount the same and throw in a few drops of vinegar) and 5 tablespoons of melted butter. Next time I make this, I will reduce the amount of zest, use the suggested whole grain mustard so there are crunchy seeds, and add some sauteed onion. The paprika should be sprinkled on right at the end. I would recommend a little more than we used.

As Grant is not fond of any of the cruciform vegetables (shame on him, as they are yummy), I did not inflict on him the cauliflower mash that the original recipe suggested, but rather had white and wild rice under the chicken to absorb the juices, with sauteed zucchini on the side. I used a bit of the Penzeys blend “Florida Spice” because it has orange and lemon peel in it and i thought the veggies should pick that up, but the main meal was citrusy enough that it didn’t need that. Next time I would use just regular salt and pepper and maybe pick up the paprika instead.