Last month, we enjoyed a six-day trip in south Georgia for Christmas, and we’ll be covering our new experiences over the next week and a half. I wanted to make sure that we got a new story from Savannah this time out. I figure any opportunity to stop into this great city is one worth taking, and I’m glad that we’ve resolved to come here a little more frequently on our travels. Last year, one of our readers recommended that we visit this teeny little carry-out room on York Street and try their amazing hummus. I’m not quite sure that Marie is one hundred percent satisfied that we did. I think she liked the food okay, but she got humbled in a no-holds barred battle of puns with one of the employees here. It really was a sight to see.

In case you didn’t know this about her, Marie has been making my daughter and me cringe with godawful puns for far too long a time now. She pulls them out quickly and effortlessly, usually in well-timed groups of three, impromptu and absolutely terrible. I’ve never seen anybody so pleased with themselves for making their audience miserable. Trauma prevents me from giving you an accurate accounting of what happened, but it went a little like this: I told the fellow at the counter that I’d heard they make really good hummus here, and he suggested that we order extra pita bread with it, because they’ll give us a ton-us of hummus, and then Marie snapped something back with that big, gorgeous, terrible grin of hers, and the guy went “oh-ho!” and shot something back at her.

Somebody said “re-sauce-ful,” and there were some cracks about chicken, and wraps, and wrapping things up, and then my wife started to stumble, and this snarkmaster was just getting started, and I lost sight of my daughter, because she’d had enough of these terrible jokes and left, crossing the street to get away from this tomfoolery. Marie was on the ropes, and this clown just kept zinging, like Catskills night on the Johnny Carson show. She finally stopped talking, and he sure didn’t.

Three days later, she still wasn’t herself, so I bit my lip and swallowed hard, and, as we were dressing the toddler for bed, I told him that the snowman on his pajamas was named Saint Simons, because snowman is an island. Color returned to Marie’s cheeks and she shouted “Grant! That’s not like you atoll!” She might want a rematch with that guy, but I think she’s going to make us suffer for a few years first while she trains. 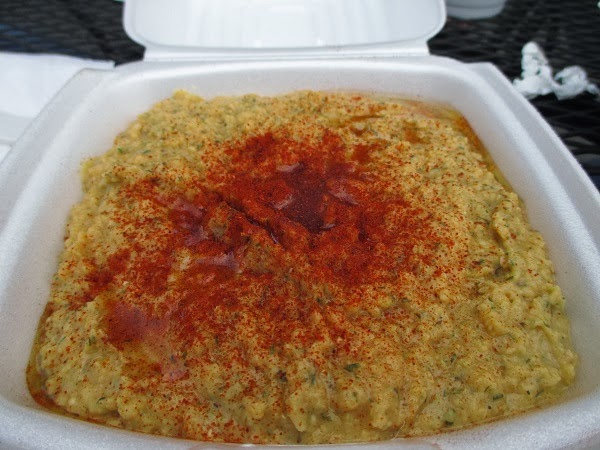 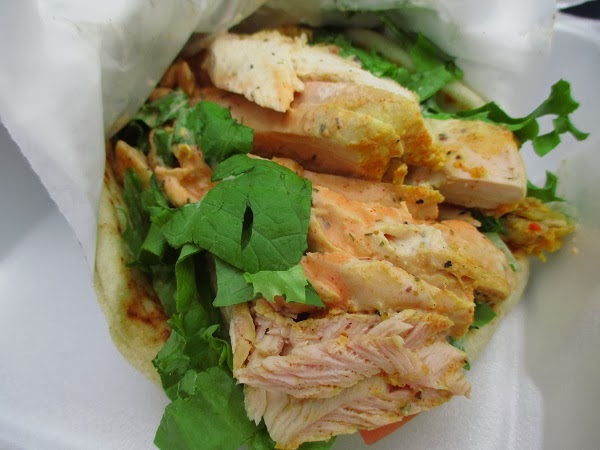 Zunzi’s is a very successful little take-out counter. There is no interior seating, and only six tables on a brick patio area around the corner, where guests can count on being cheeped at by hopping, scavenging birds looking for handouts. One of the owners is from South Africa, and his wife is from Switzerland, and the food, not surprisingly, has a very international flavor. The hummus was indeed some of the best that we’ve ever sampled, and my chicken wrap came drizzled in a wonderful, creamy and thin pink-red sauce that left me wondering what on earth was in it. The chicken itself was delicious, moist and seasoned in a peppery mix of spices.

Marie ordered a sandwich called a Chas Schnitte, which is baked ham, cheese and asparagus with tomatoes. What an odd collection of ingredients! She really enjoyed it. This came out after the others, because while many of the most popular, and easily assembled, foods are ready at the counter for quick creation, this required a little cooking, which is done upstairs and delivered to the line by way of a dumb waiter. The fellow at the register, a clown like his buddy on the other end of the line, caught me smiling at that and told me that the kitchen is directly above us, and if that stove were to give through the rickety floor, “it’s going to take both of us with it.” I took one step backward, just to be safe. 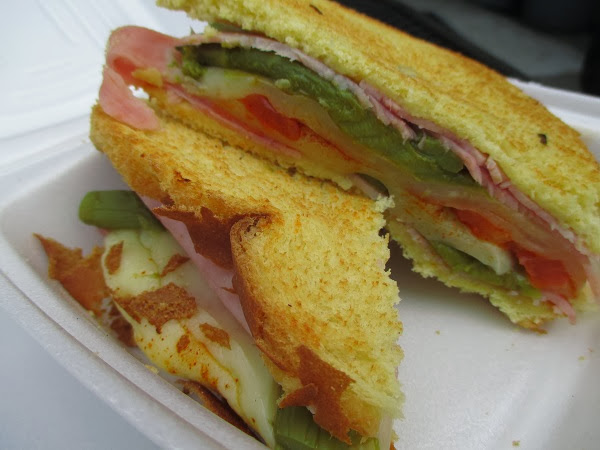 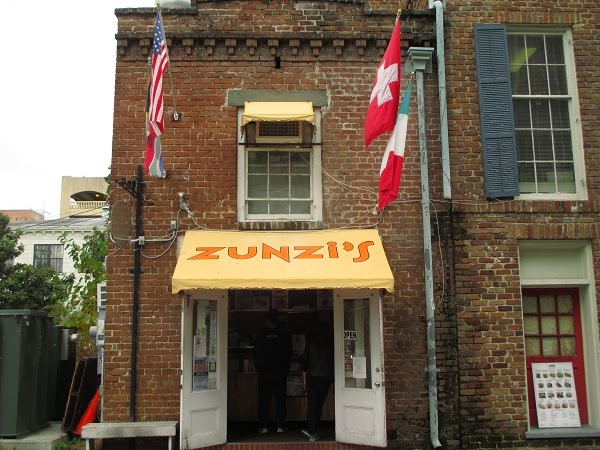 Zunzi’s signature drink is “African sweet tea,” also known as rooibos. We had one cup of that and one of the more traditional variety. It’s a very black tea, and I thought it was pretty interesting. It had these gentle, lingering hints of anise, and while I don’t think I’d want it every day, it was a neat little experience. If it’s a pleasant day, this is a fine stop for a little experimentation and silliness.

Other blog posts about Zunzi’s: