There used to be a great site called Not Fooling Anybody. It’s been stuck on this “Please Stand By” page for years, but some of its backmatter still exists if you play on the Wayback Machine. Our friend David recently reminded us of this hobby that we love – spotting and documenting conversions of old restaurants and businesses – when he found a newer, similar site, Used to Be a Pizza Hut. I figured there were a couple of converted Pizza Huts that I could shoot for these guys. Then I figured that a few more things stood out in my memory, and they’re all on the same stretch of road. Well, almost.

There are probably corridors like this all over the metro area – Jonesboro Road and Bankhead Highway come to mind – and in every other suburban area in America. But this is where I grew up, and so the decline of national or large regional chains, and the skeletons of the buildings they left behind, intrigued me, so we went out to take some pictures. 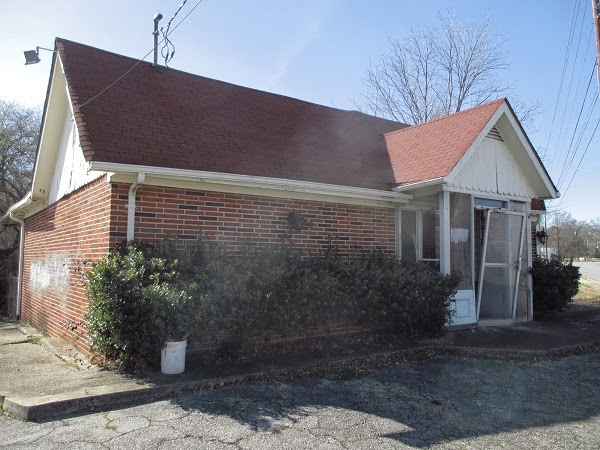 First up, though, is George’s Restaurant. This was, once upon a time, on Atlanta Road in Marietta right as it crossed South Cobb. My parents ate here with friends all the time in the 1980s, but it had been around for decades before they started eating there. My mother and a couple of her friends told me that they had really amazing steaks here, and that George, a boisterous, lovable grandfather of many kids, who was always visiting his guests’ tables, believed that the USDA labeling of the meat’s quality had nothing to do with how well the steaks turned out. Instead it was how well you took care of the meat once you bought it, and how the seasoning, the marinade, and the final preparation gave it flavor. The family talked George into a long-overdue retirement not long before Atlanta Road was rerouted a few hundred feet away so that it could be widened into a four-lane. This stretch of now-lonely road was renamed West Atlanta and the building has been vacant for many years now. 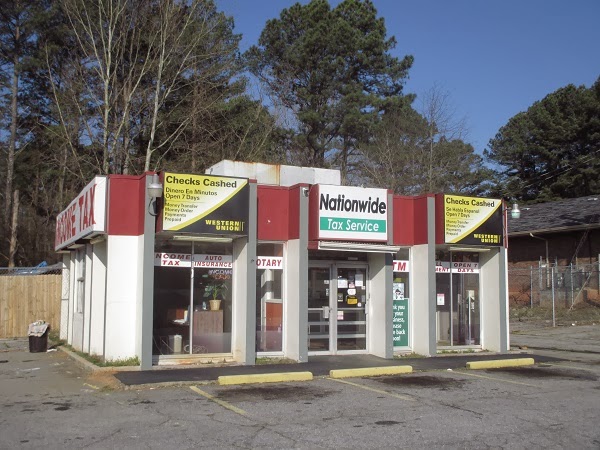 Here’s what really sent me out with the camera: a Maryland Fried Chicken now doing business as a check cashing place. Of course, the MFC closed decades ago. I don’t have any memory of one of these being so close to us at all, but if you’re looking at the building, it is obvious what it was. 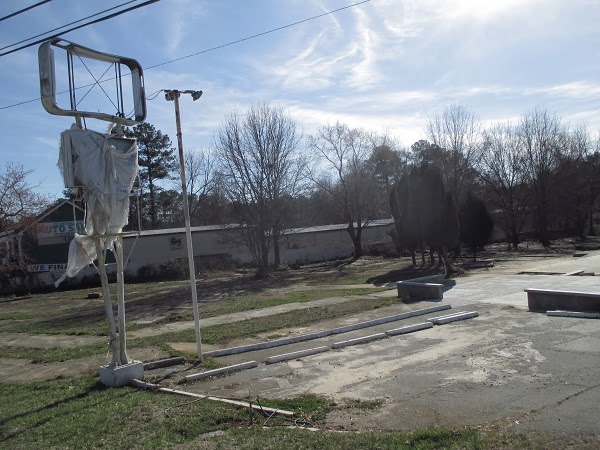 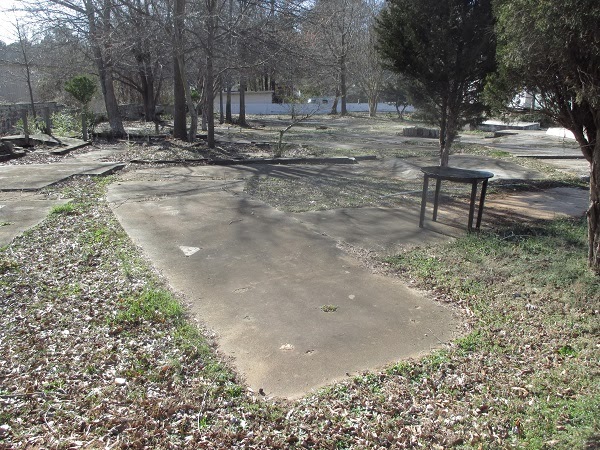 You know what this odd patch of ground and that frame of a sign is, right? Yes, a Putt-Putt used to be here. I always thought this chain was a poor cousin to the Jolly Golf a few miles further on. After all, those places had big fun obstacles and dinosaurs and mad hatters and things. The Putt-Putt just had weird layouts, no statues. There’s nothing left of the Jolly Golf – a Wells Fargo bank sits there now – and nor is there sign of the water slide that had been near the intersection with Church Street. When White Water opened in the mid-1980s, it killed business at that water slide stone dead. 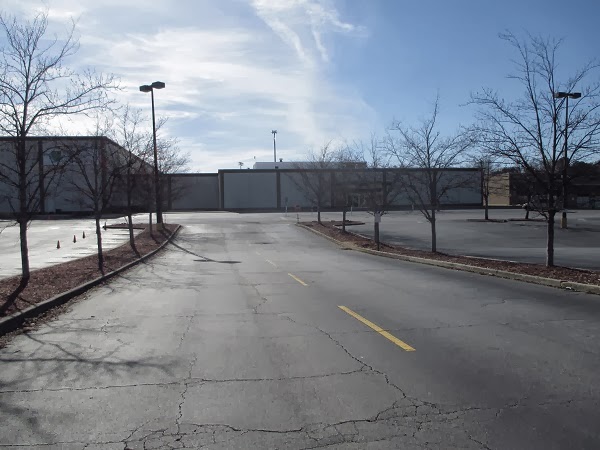 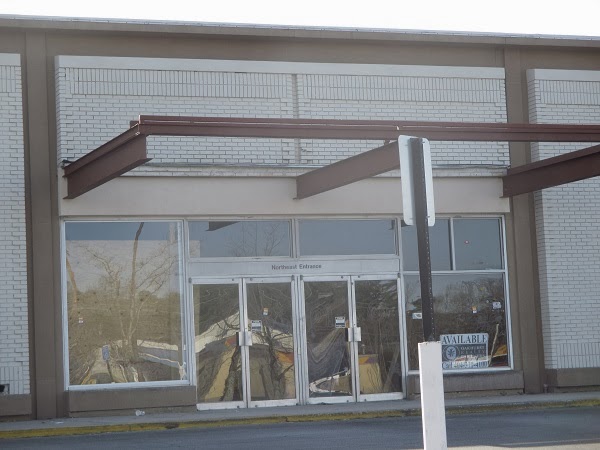 The above two pictures are of Cobb Center, one of the best-known dead malls in all of Georgia. It’s been documented pretty thoroughly online before, most memorably at the excellent Sky City. In the 1960s, you had this and the nearby Belmont Hills drawing gigantic crowds, but time marched on for both. The bulk of the property, which for many years was only just a lone, out-of-place Rich’s attached to a totally vacant building, is now home to a private school called The International Academy of Smyrna, and while it doesn’t occupy the same walls, a Publix grocery store evokes the memory of the Big Star that was here in the 1960s. 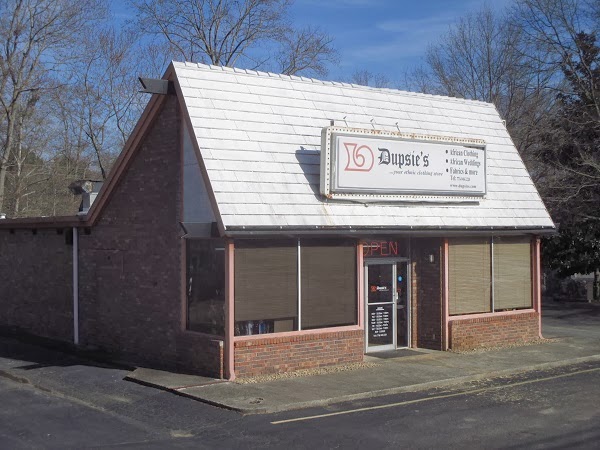 If you don’t recognize the above building, I’m going to have to assume you’re new to this blog. This, of course, is a former Shrimp Boats, one of our pet projects. During the 1960s, this business was located around the corner and up about a mile, “anchored,” as was the standard in the 1950s-1968 version of the restaurants, in the parking lot of a shopping center. It was a large trailer gussied up to look like a boat and it was in the front / side lot of Belmont Hills. In 1969, the business relocated into this newly-built home, and closed when the chain failed in 1974. Many other businesses have used it since, including Down East BBQ and a stereo equipment store called The Sound Hound, and, for the last several years, a clothing store called Dupsie’s. I would love to know what was here in between Shrimp Boats and Down East.

Windy Hill is the next intersection. If you turn left there, you can quickly make your way to the flat, fenced-off parcel of land where Belmont Hills once stood. 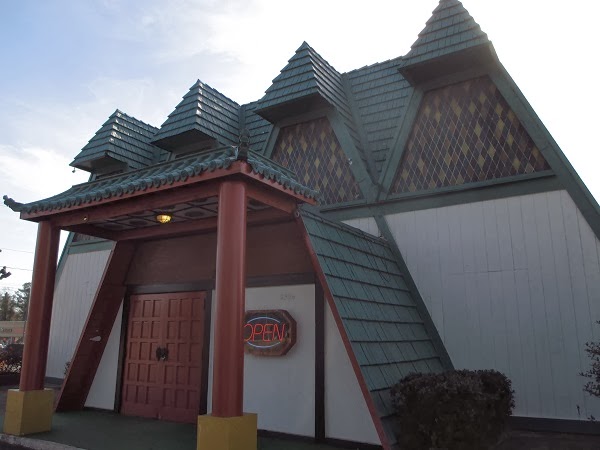 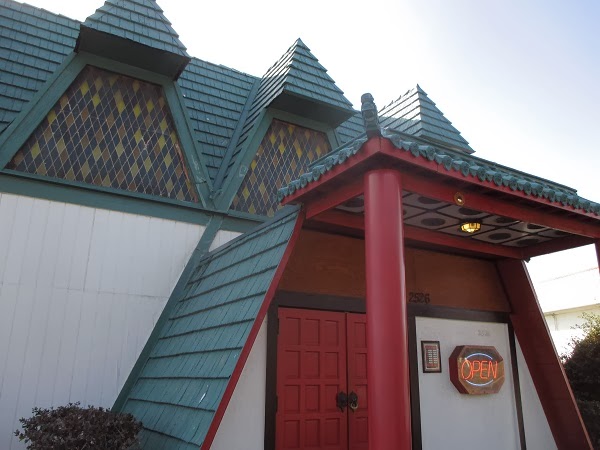 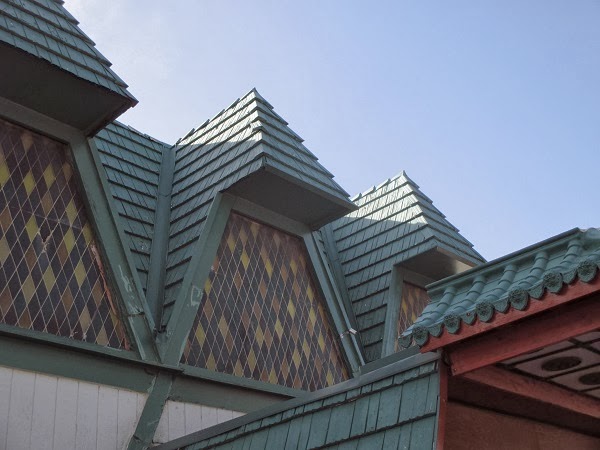 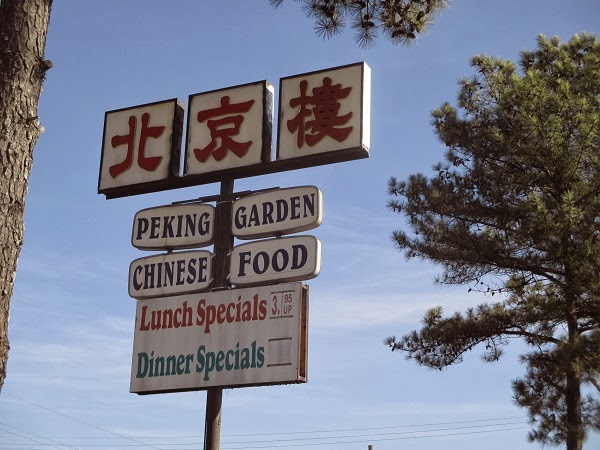 Here’s an exception to this story of new businesses in old homes. It’s an old business in an even older home. Peking Garden has been here forever, and just look at all the detail and work of this building. This is amazing; nobody would invest in such an intricate, beautiful facade in this day and age! There are places where it’s crumbling, but heck, nearly forty years will do that. What a gorgeous building. It’s a standout among the decay around it. The sloping A-frame of the building, also a little evident in the picture below, was originally constructed for a German restaurant called Bavarian Alpine Inn and then adapted with new fixtures when Peking Garden took it over in the mid-1970s.

The strip mall behind was once home to the two-screen Miracle Theater. Demolished long ago, the center then became home to a Cub Foods. Then another large grocer, catering to the area’s growing Spanish-speaking community, moved in. That’s gone, and the giant space is now a House of 10,000 Guns or something. 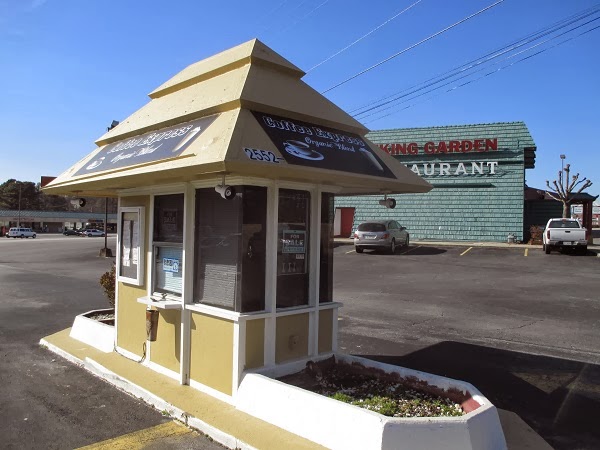 Next door to Peking Garden, a former Fotomat, most recently in use as a coffee shop. 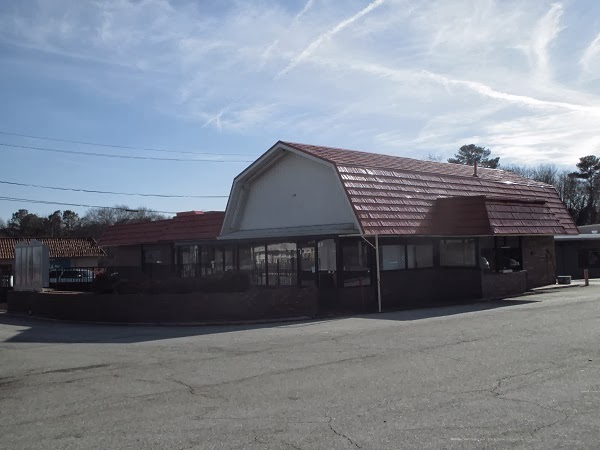 Many of the recognizable, abandoned fast food structures along these couple of miles of road are still vacant. Rumor had it that this Dairy Queen, invaded by giant mobs of Wills and Osborne High students every Friday night in the 1980s, was the most profitable Dairy Queen in the country for many years, but it has been closed and vacant for a really long time. Also abandoned and available within a short walk from this site are a Krystal and an Arby’s, decaying and collecting dust. 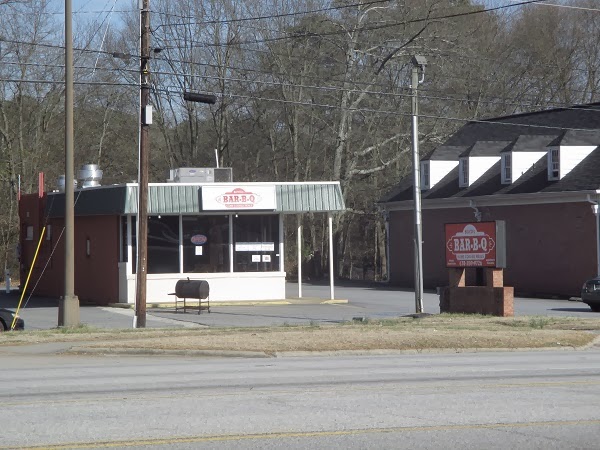 But most old fast food joints do find other tenants eventually. This former Waffle House, across the street from the Dairy Queen, is presently Boyd’s Bar-B-Q, which my daughter and I visited late last year. 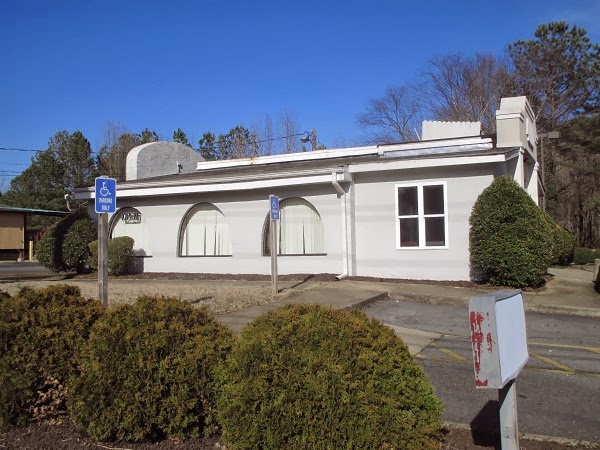 And do you recognize those windows? This is Alam Medical Clinics, previously a Taco Bell. How about this roof? On the Bayou (here is our 2012 report) was once a Huddle House. Around the corner from here, on Concord, is Ebony and Ivory, which we first visited in 2011 and whose home was originally a Church’s Fried Chicken. 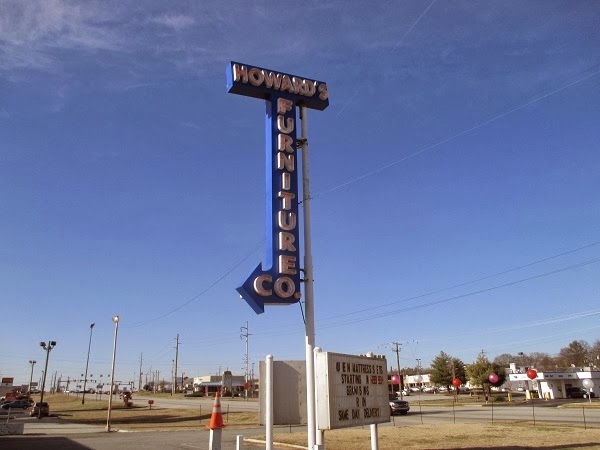 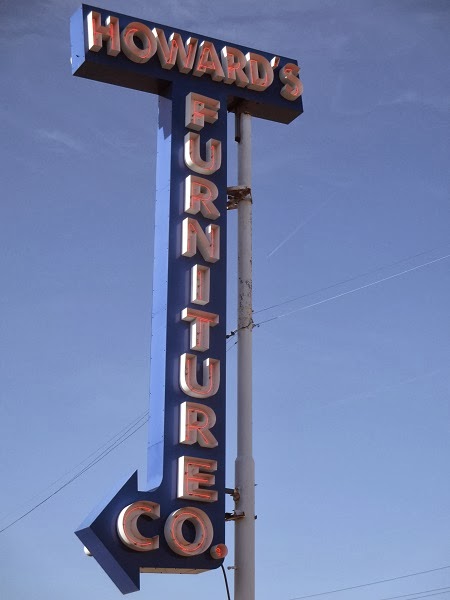 A short break as we continue traveling south, just to show off this wonderful sign at Howard’s Furniture Company, which has been here for about forty years. What a gorgeous sign they have! 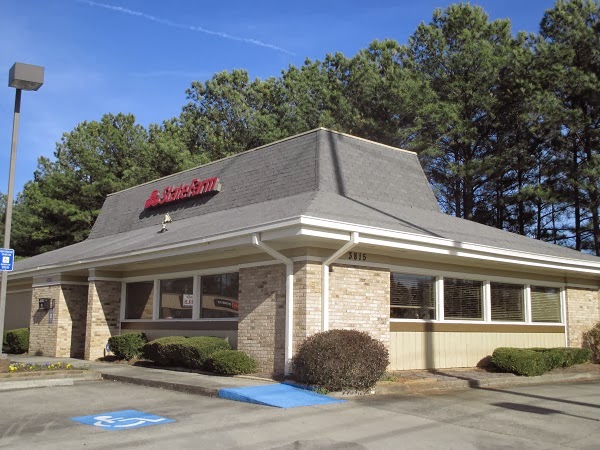 As we approach the intersection with King Springs Road, this project draws to a close. In the shopping center here, the Big Star is now a Big Lots, and this Pizza Hut, where I spent many Friday evenings in 1987-88, is now home to a State Farm insurance agent. 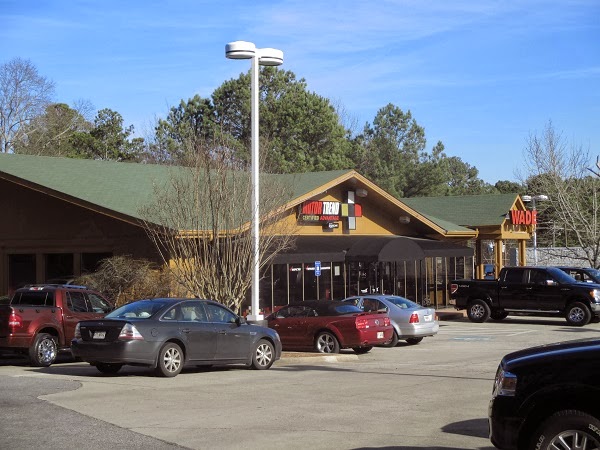 Next door is the former Shoney’s, now a Wade Ford car lot. In 1987, my high school sweetie’s parents, after football games, would “discreetly” have supper here while us teenagers carried on at the pizza place. Then I’d walk her next door to meet up with her parents and get a ride home from them. Next door to that had been the Del Taco that got me addicted to them for life. It was demolished in the early 1990s and an Eckerd Drugs went up on that site. Some time before Eckerd was bought out by Rite-Aid, this store had closed, and a Pet Supermarket has been there for ages.

Then when you get a little further down, there’s the Adventist Hospital which has been at least two other hospitals, and when you make the left turn onto Ridge Road, that house on the corner used to be the “Monster House” on account of its barred, stained-glass windows. Heck, even those have been replaced. Some homeowner decided not to hold onto something so creepy and so very 1970s. Anyway, this corridor is certainly full of places that have changed a great deal, but it’s by no means the only one in town. I wonder what it will look like in 2024.