Have I ever told you about my sentient iPod? I’m quite serious when I say it’s alive. Six thousand songs on it, and it routinely, when shuffled, plays songs back-to-back with the strangest and most tenuous connections, like four songs in a row played by artists whom I’ve seen at one particular venue in Atlanta, or three songs in a row with the word “radio” in the title, or two songs that had made their way to the seminal soundtrack to Pretty in Pink. Once in a while, it will play songs that answer each other. There was one evening when it played Bryan Ferry’s cover of “Are You Lonesome Tonight?” and then “replied” with Cowboy Junkies doing “I’m So Lonesome I Could Cry.” Recently, it followed XTC with the Beatles: “My Bird Performs,” “And Your Bird Can Sing.” So I pay attention to my iPod.

A couple of Fridays ago, I was wondering what I should eat, and so I asked my iPod, aloud, “What should I eat today, o sentient iPod?” I know you’re going to think, based on the title of this chapter, that it played “Ebony and Ivory” by Paul McCartney and Stevie Wonder, but it couldn’t do that, because I can’t stand that song and don’t have it on my iPod, but it did play “Pipes of Peace,” from Paul’s 1983 album of the same name. I probably enjoy Paul McCartney’s solo work a lot more than anybody you know, but I’ve got my limits, and that album is one of them. (London Town is another. Good grief, what a rotten record. Anyway.) But while the Pipes of Peace LP is the living definition of safe, unchallenging, soft rock treacle, that title track just manages to stand out a little, even if Paul really managed to otherwise make far too many records in a row that sounded way too much like each other, and, consequently, make himself quite irrelevant to anybody who went to high school in the late eighties. The result of this is that even though I like “Pipes of Peace,” I can’t quite listen to it without thinking about all his other early ’80s treacle, like “Ebony and Ivory,” and that reminded me that there’s a take-out barbecue place on Concord Road in Smyrna by that name.

You would agree that this is the iPod’s doing, right?

Ebony & Ivory is in a very unassuming little place near South Cobb Drive, across from the old building where Smyrna’s Fat Boy had stood for many decades. It was apparently once a Church’s Fried Chicken, but I don’t remember that, personally. Guests will have no trouble finding it, even without a street sign; just look for the big black smoker out front and follow your nose for the amazing scent of meat cooking over cherry wood. I went to speak with Victor “Ivory” Amato when I parked and told him that if his food tasted half as good as it smelled, I’d be in good shape. I was; this place is a winner. 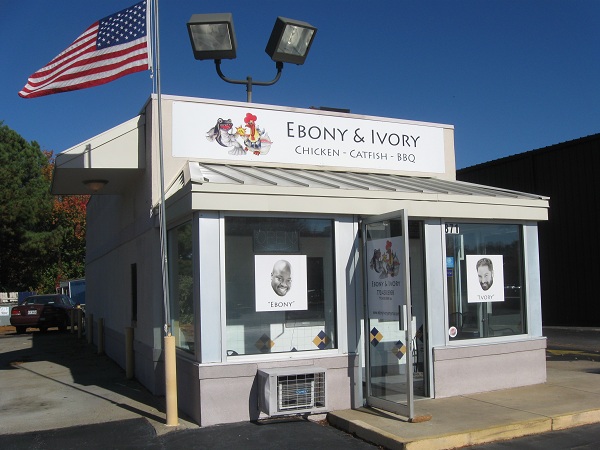 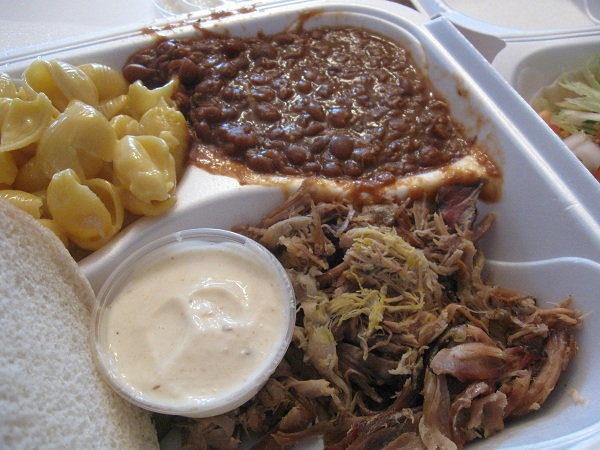 Amato and his partner, Marcus “Ebony” Phillips, opened the small window in the summer. It’s more than just a barbecue joint; they give equal love to catfish and chicken. If you like southern cooking, there is definitely something here for you. The partners have more than twenty years’ experience in the restaurant business, and worked together at the Dantanna’s at CNN Center.

I had the pulled pork with mac and cheese and baked beans, along with a catfish taco. I think that the only thing that I don’t much like at this place is that Brunswick stew is not offered as a side, but, unusually, as a full dish which guests can order with sides of its own. Otherwise, everything from the prices to the quality of the food to Amato and Phillips’s smiles and fun, upbeat attitudes pleased me greatly.

The pulled pork was just fantastic, and while I enjoyed the white sauce that I got on the side, the meat didn’t need a drop. I am curious enough, however, to want to stop back by and get some of their other sauces next time. I might see about taking my order back to my mom’s house, as it’s only about ten minutes’ drive from the restaurant. The twenty minutes it took to get this yummy food back to my place in Marietta were agonizing.

Anyway, enjoying this good food in my own dining room, I was also really taken with the baked beans, cooked with a little pork, and the catfish taco. Overall, the food is every bit as good as the terrific stuff at Buckhead Barbecue Company, a few miles down South Cobb. My personal feeling is that BBC might just have a slight edge, as they are a full service restaurant, and I always like the opportunity to sit and visit for hours and hours when it arises, but both restaurants are serving up wonderful barbecue and are absolutely worth visiting.