It has been several weeks since we last mentioned a barbecue place in our blog! We have, recently, been enjoying some pretty good ‘cue, but at places that we’ve visited previously. In July, we enjoyed stopping by Bub-Ba-Q, Ebony & Ivory, and Big Shanty Smokehouse. A couple of weeks ago, Marie and the baby and I also visited a very new place that opened in Tucker last month. The Greater Good Barbecue is owned by Clay Harper and Mike Nelson, who own Fellini’s Pizza and La Fonda Latina, and are, I believe, co-owners of Ringside Franks & Shakes, all of which we enjoy and have also featured here. (I’d link you, but too many blue words in a single paragraph is bad for your eyes, you know. Seriously.)

My concern-o-meter started ticking when we found the place. It is huge. It was built as a Western Sizzlin in the late seventies and has been home to at least two other restaurants who bit off more than they could chew since that place closed ages ago: the Stage Door and the Golden Dolphin. You know how people have been wishing that Heirloom Market would find a bigger space? Nobody’s even thinking this big. 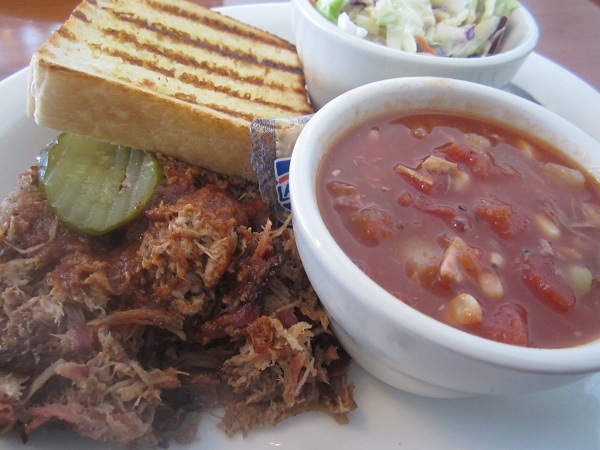 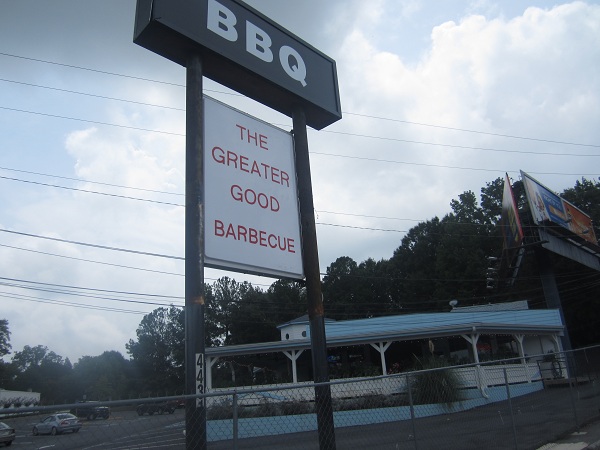 The Greater Good is going to need a superlative product to keep the lights on in a space this large, and I’m not convinced that they’re quite there yet. It’s not at all bad, and we’ve certainly had far worse, but neither is it drive-across-town good, either. The Brunswick stew is thinner than I prefer, but it also packs a solid and rich flavor of tomatoes. The slaw is merely an average mayo-based variety. The chopped pork is tasty and moist, and not overpoweringly smoky.

At this point, they only have a single sauce available, although our server told us that they were thinking about adding more. It’s a basic, mildly sweet brown tomato-based sauce in a chilled squeeze bottle. It’s not bad, but not in any way adventurous. That’s how we feel about the restaurant overall. Lacking the inventive and creative spirit of Heirloom Market or Sweet Auburn, this is a simple and no-frills barbecue experience, the same sort of traditional pork-and-sides that has been satisfying Atlantans for many years. If we lived in this corner of Dekalb County, then we would probably eat here regularly, and if you’re anywhere within a reasonable distance of Hugh Howell Road, then you should give it a try. From up here in darkest Cobb, however, it really is a haul, past places that we enjoy more.

That said, while I don’t believe that we’re in any big rush to return to Tucker anytime soon, if we do, we will definitely stop by again and try their ribs. Sure, you can’t judge by appearances, but while the chopped pork tasted pretty good and satisfied, those ribs, as seen on a fellow diner’s plate, had me unbelievably envious. They looked really promising. Fortunately, I spared myself the calories of plowing into a half-rack of those after cleaning my plate. I had found a good-looking place for dessert and Marie was looking forward to it, and I had calories coming from there. 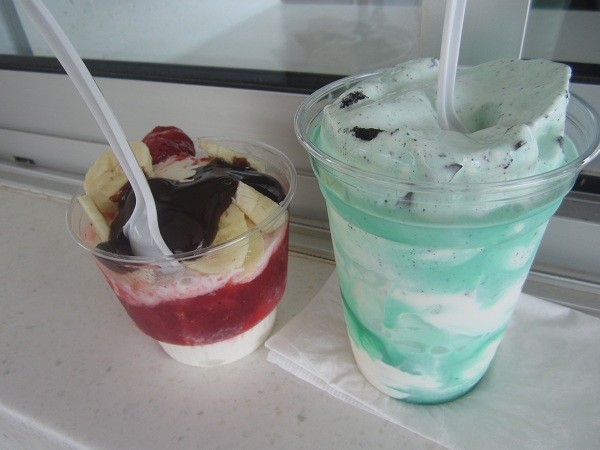 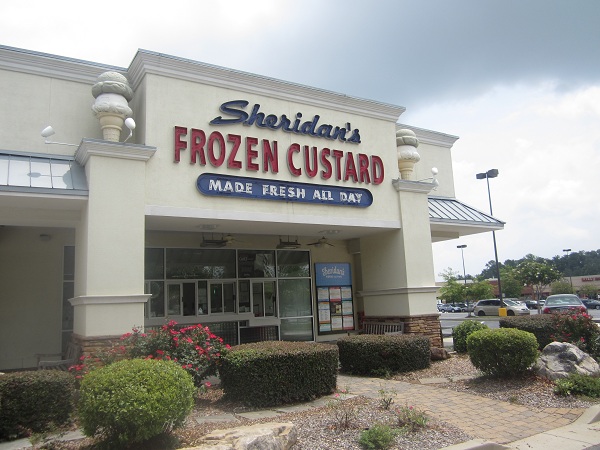 Sheridan’s is a chain based in Stillwell, Kansas. They currently have twenty locations in seven states, with the main concentration in Missouri and Kansas. There are two in Memphis and just the one store here, so it’s not a chain that we run across much. Their buildings have a huge footprint to manage all the freezer space, but no indoor seating. It’s just a walk-up window and a drive-through.

Marie ordered their signature item, the Buck-a-Roo. It’s vanilla custard with hot fudge, strawberries, and bananas. She insisted that I have a Grant’s Grasshopper because it has my name. That’s a concrete also made with vanilla custard, with mint syrup, chocolate chips and crumbled Oreo cookies. Well, they said that it was a concrete. Since frozen custard stores are still very uncommon in the southeast, I have had very few chances to try one. I saw my first concrete when we were in Starkville last year, at that town’s outpost of Bop’s, a chain with eleven stores in Mississippi and one in Louisiana. The selling point of a concrete is that it’s meant to be so thick that you can turn the cup upside down and not lose your spoon. That’s my understanding, anyway. We don’t seem to get many correspondents from St. Louis or Milwaukee to correct me on that point, or argue whether concretes were first concocted at Ted Drewes or at Kopp’s.

At any rate, while a Bop’s concrete can indeed be inverted without fear, this grasshopper concrete would end up in your lap, having no greater thickness than soft-serve ice cream. I concluded that my lap was no place for it and put it in my mouth instead. I enjoyed it on the ride back across the top end perimeter home, thinking that we’d driven an awfully long way for pretty good barbecue and a not-concrete concrete.

Update, 10/15/12: Sadly, word reached us that Sheridan’s closed this store over the weekend.

Other blog posts about Sheridan’s: