A couple of Fridays ago, I got an incredible treat. I had been inspired, earlier that week, to start doing a much better job simply photographing old buildings. Start following Roadside Rustic and you might be similarly moved. Maybe, every once in a while, I might come up with something a little better to share with you good readers, or maybe I’d just find a few good things for the old hard drive, or perhaps even something worth printing out one day. (Wouldn’t that be novel?)

So I had a few hours to kill between finishing a short, early morning shift at work and joining some co-workers for one of them to have a farewell lunch. I decided that, rather than driving anywhere, I would take advantage of a pleasant, not-too-hot morning and just enjoy some time on foot, walking from the Luckie-Marietta district downtown where I work over to the Fairlie-Poplar neighborhood. I got a little bit of exercise and visited Tin Drum Asia Cafe, as noted in the previous chapter, and then I enjoyed something quite special. I circled the federal courthouse which is at Fairlie and Walton Streets, and which does not draw any attention to itself, taking some pictures, none of which are particularly shining, and then decided that I’d pop my head in and see whether the public is allowed to look inside and see the interior.

Sadly, they did not allow me to take any photos inside the building, but the US Marshals who work security allowed me in, as a local attorney had arranged for a tour of the high-security place with his family, and I could come along with them. I am so grateful to these good gentlemen for allowing me in, because this was a fantastic treat, seeing these beautiful old courtrooms and curtains, and a WPA mural, and the room where the federal judges of the 11th Circuit Court of Appeals are sequestered.

Speaking of good gentlemen, the Marshal who gave us the tour had formerly worked as the head of Marine security at the White House from 1984-1988, who saw off and met President Reagan’s helicopter each time he flew. And he almost didn’t get that job, because, seconded to the US Navy on assignment, he spent eight months of 1979 deep undercover infiltrating the Red Brigade, leaving a big hole in his security record since nobody was supposed to know where he was! Moral: you meet more interesting people if you just get out and look for them.

Across the street, I enjoyed a very old sign that hangs on the corner of the Forsythe-Walton Building, which houses some offices above some ground floor retail. On the corner, above what is now the Pan-American Cafe, there’s this decrepit old sign for a long-departed business called The Pipe Corner. 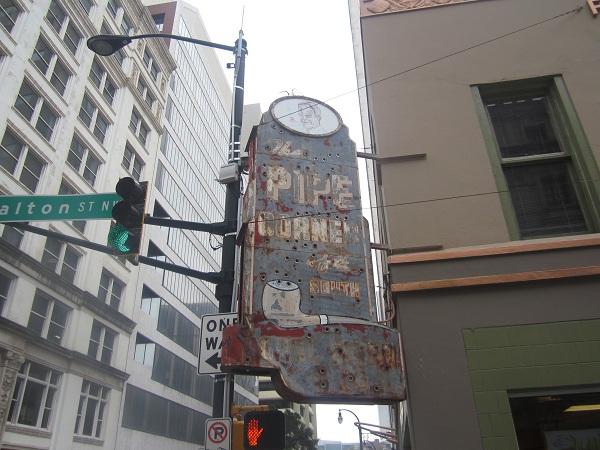 After that, the rest of the afternoon was bound to be a little bit of a letdown, although the staff at the downtown Ted’s Montana Grill – it’s on the corner of Luckie and Spring – did their best to make ours a memorable meal. We were saying goodbye to Annie, who is going off to graduate school in Texas. Over the last ten years, the stores of the Ted’s chain – 45 locations in fifteen states at the time of writing – have probably hosted a pretty huge number of birthday lunches and farewell meals for offices. It’s a reliable lunchtime stop for businesses, offering well-made classic American comfort food at reasonable prices. The interior evokes an early 20th Century high-end cattleman’s grill.

As a native Atlantan born in the early seventies, I’ve grown up knowing of Ted Turner. I remember when the channel that showed Gilligan’s Island repeats changed from WTCG to WTBS and ran ads to announce the change that mocked all of the dirt-cheap commercials that advertised on the station. “John Wesley Harding once shot a man for snoring too loud,” one went, reminding us of a trivial note used as a selling point for a series of Time-Life encyclopedias of the Old West bound “in the look and feel of real hand-tooled leather,” “and WTCG is changing to WTBS,” before an actor dressed as Harding in front of a studio blue backdrop replied, “Yer kiddin’!” I remember hearing about Turner racing in the America’s Cup and marrying Jane Fonda, and starting up the Goodwill Games and telling us that those dirty commie Reds weren’t really so bad and that perestroika is a good thing, and believed that everybody in the country loved our Braves. My parents, naturally, hated him.

Turner, who was until very recently the largest private landowner in the country, decided to start raising bison, and reminding Americans that the buffalo is not yet actually extinct and can be raised and ranched just as well as cattle. He partnered with George McKerrow Jr. to found the Ted’s Montana Grill chain. McKerrow was once a high muckity-muck in the very-nearly-defunct Victoria Station chain – a single location exists, in Boston – and, in 1981, founded the successful Longhorn Steakhouse chain. I think if there’s any man at the national chain level that I’d like to meet and interview, it’s probably McKerrow, because those Victoria Station steakhouses were the most awesome places ever. There was one near Cumberland Mall where two banks and a hotel sit now, and for years before I actually ate in one, whenever we’d drive past, I’d have my face pressed up against the glass wondering how in the world are all those box cars and trains a restaurant?! They were an absolute triumph of restaurant design, and one that everybody with a blog, a camera and a love of old buildings wishes that they could revisit.

But I was telling you about Ted’s. The first opened in Columbus, Ohio, but the first of their presently thirteen Georgia stores, all either in Atlanta or its suburbs, opened not long after. The Luckie Street store is located next to their corporate offices and management training facility. 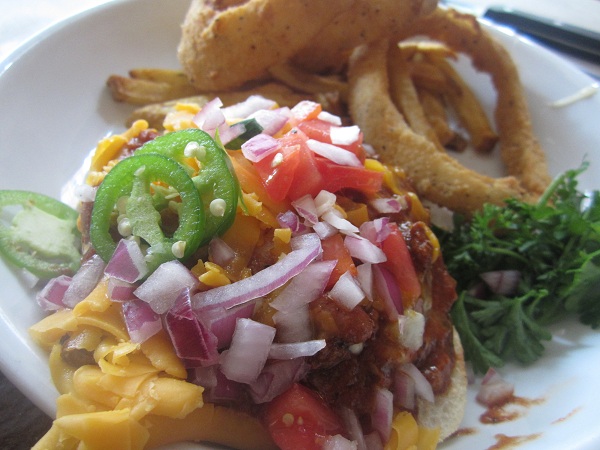 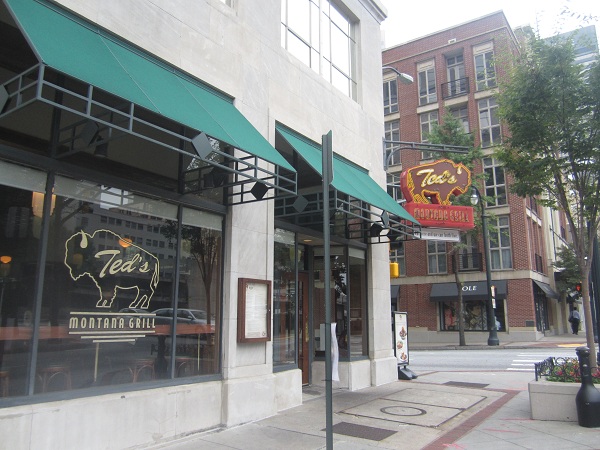 Ted’s has a reputation for excellent burgers, and, as bison is a little bit leaner than beef, they are not quite as heavy. I don’t know anything about how they’re prepared or seasoned, but they’ve always been pretty good in my book, if not transcendent. Where Ted’s really shines is with their bison chili, which is meaty and completely wonderful. After trying several different burgers on their menu, and usually having a cup of chili on the side, I settled on their knife and fork chili burger, which is served open-faced on ciabatta bread. It’s a smaller amount of food and doesn’t cost quite as much, and you still get some of that excellent chili. One of those along with a half-and-half order of fries and rings is a very reliable meal to remember should you ever go off with co-workers to one of Ted’s places.

Other blog posts about Ted’s: