One of my favorite musicians is a guy named David Sylvian, who’s recorded dozens of weird and wonderful boundary-stretching albums, often in the company of similarly innovative egghead musicians like Mark Isham and Robert Fripp. I figured that Steven Chan, owner of the small, local chain of Tin Drum Asia Cafes, might be a fan when I thought about the name of his restaurant. Tin Drum was the name of the last studio album by Sylvian’s first group, Japan, who were on Hansa and then Virgin Records in the late seventies and early eighties. Chan also used to have a second pair of restaurants called Wonderful World. Sylvian had a beautiful song by that name, too. Then I walked past the downtown location of Tin Drum last year and saw a huge mockup of that album’s front cover staring back at me from the front hallway. That settled it. Inside, there are a few more bits of Sylvian paraphernalia, including posters from his 1988 tour, and some installation or public art project from his brother, Steve Jansen. 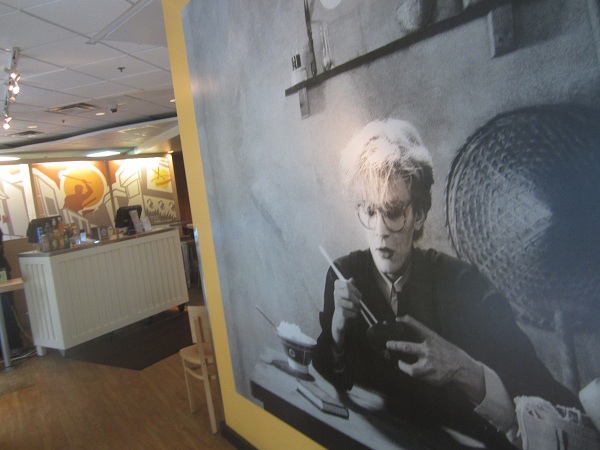 The interesting thing about the group Japan is just how inappropriately-named they were in the end. Heaven only knows how they got that moniker in the first place, apart from a desperate hope (halfway home) that they might end up as teenybopper idols in that nation, with their trendy-for-1975 suits and long, unkempt hair. They were loathed in their native England, thanks in part to their first two albums being, and I say this as a huge fan, utterly unlistenable sneering rawk. But Japan loved Japan, and vice versa, in part because the band got together with Giorgio Moroder and recorded a pretty obviously crass, but nevertheless incredibly catchy “please love us” song called “Life in Tokyo.” But around the time they got Vidal Sassoon haircuts, traded the polyester for sharkskin, and caught the New Romantic wave of good-looking men with lipstick and synthesizers, and decided to sound less like the New York Dolls and more like Roxy Music, Sylvian suddenly became a pop pin-up like Steve Strange and Nick Rhodes.

But his visual influences abruptly shifted as well. Instead of photoshoots with a samurai behind them and a big rising sun, the band was now being photographed in front of a poster of Chairman Mao and a lump of bamboo. They shot videos with ceremonial dragons dancing, and recorded songs with names like “Cantonese Boy” and “Visions of China,” and when they finally started having hit singles and the British tabloids were actually calling Sylvian – no joke – “pop’s most beautiful man,” sneering deejays were asking whether they’d failed geography class. Interestingly, the small poster of Mao that appears on the cover of the Tin Drum LP did not make it to the big blowup of the album cover in the restaurant’s entryway.

All this pop music backstory actually serves a purpose. Beyond letting me yammer, I mean. Just as Japan, in the end, was influenced by far more than a single culture, Tin Drum embraces cuisines and styles from several nations. It’s there in the name, Asia Cafe, and guests can mix and match foods and styles from Japan, China, and Thailand. They can be prepared over white or fried rice, with curries, as noodle soups, or as wraps or tacos, reflecting the Korean-Mexican fusion that Yumbii and Hankook have been popularizing. So it’s pretty far from a traditional experience, and whatever you’d like it to be instead.

When I finally stopped in a couple of Fridays ago, I enjoyed a bowl of their Japanese katsu chicken curry. Served over sticky rice and drenched in a thick, mildly hot yellow sauce, it included jalapenos, onions, potatoes and carrots and it was quite wonderful. 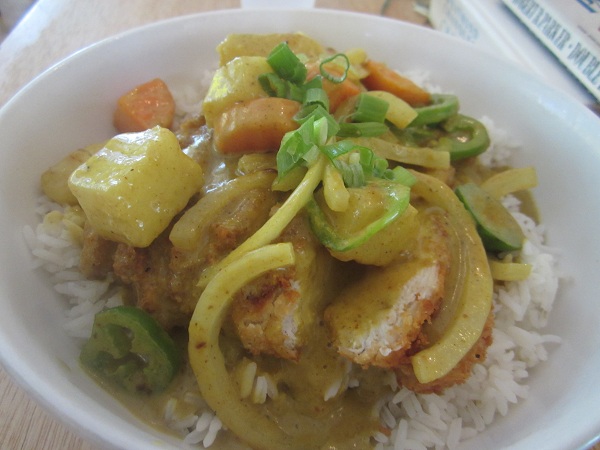 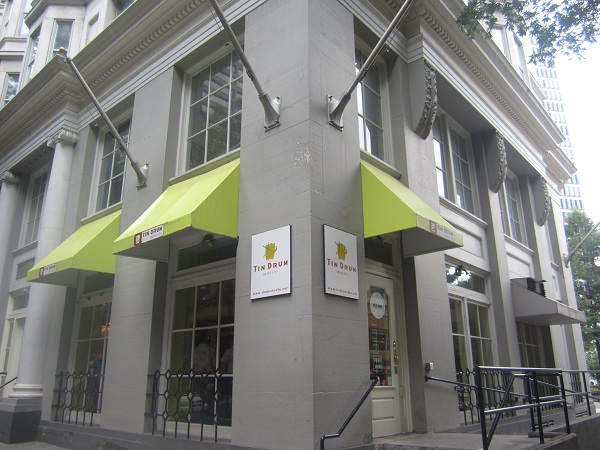 The downtown Tin Drum is located on the ground floor of the Flatiron Building, where several restaurants, mostly chains, line both shaded sides of Broad Street and cater to GSU students and bankers and whomever is protesting whatever is happening in Woodruff Park this week. The first location of Rosa’s Pizza is here, as will be the first Atlanta brick-and-mortar store for the NaanStop food truck.

Tin Drum’s space used to be a bank’s, and the kitchen is down a spiral staircase, where the old vault has been incorporated into their storage and utility. I’m actually kicking myself for not at least asking whether I could see it. Tsk. Anyway, the bank shuttered in the early ’90s, and Chick-fil-A moved into the space in time for the 1996 Olympics. After it closed, the space remained vacant for several years until Chan opened Tin Drum and the first Wonderful World. Eventually, he chose to close Wonderful World and just use all the space for the Asia Cafe.

I remain a little disappointed that his Wonderful World concept has beached, because I really did enjoy those little burgers, but Tin Drum is going from strength to strength. There are now eight Tin Drums in Alanta, along with one in Augusta and one in Birmingham. Their first Athens store will be opening later this year, along with a ninth inside the perimeter, at Colony Square. I figure any and every chance to put Sylvian’s pretty 1981-vintage face in front of guests is a good idea. It gives people the chance to tell you about these amazing records he’s put out. There’s one called Snow Borne Sorrow that you really, really should buy…

Other blog posts about Tin Drum: