It took me a lot longer to get over to One Eared Stag than I would have liked. I was all set to head that way after an early shift a few Fridays back, when Marie texted me to say that she’d been in a minor fender bender. That started a chain of missed opportunities and changed plans that finally resolved towards the end of October when David and I made our way down to Edgewood Avenue to try them out.

The street looks like a sleepy little place during the daytime, but the silence is punctuated by the sound of MARTA trains and church bells. Since just about everybody’s talking about it – The Quick + Dirty Dirty named it her new favorite Atlanta restaurant, for example – I was expecting a much larger crowd than we found, but we had the place mostly to ourselves on a Thursday just before noon. It was nice enough to eat on the patio, and this really is a pleasant hideaway. The interior is designed in that bland, austere style common to many modern urban restaurants (and, apparently, little changed from when this space housed chef Robert Phalen’s previous venture, Shaun’s), but the patio, surrounded by the old brick of the buildings around it, is a lovely little oasis. 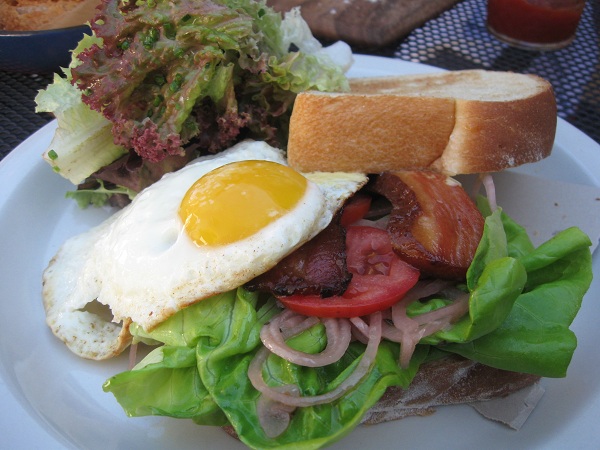 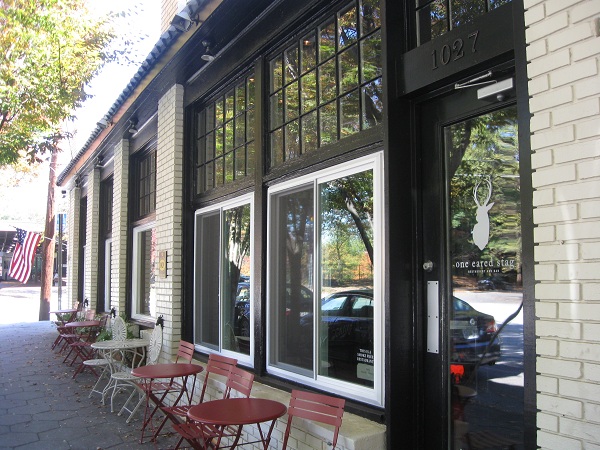 Despite the slow pace, our server is perhaps one of the busiest men in the city. He told us that he works three part-time jobs. I was reminded of a classic, Cam Kennedy-illustrated episode of Judge Dredd where somebody tried that in the 90% unemployment world of Mega-City One and went to jail for it. He cautioned David and I against ordering too many sides for our meals, as they were all pretty substantial. I thought I was splurging, as I couldn’t decide between the chickpea fries, great big thick monsters recommended by Atlanta Restaurant Blog, and the onion rings, which are completely delicious and among the best in the city. David added a pile of pork skins to the repast, served on a butcher’s block with a large pinch of sea salt and a little dipping jar of vinegar.

David’s crab roll sandwich was a sight to see. It comes on bread baked by Alon’s, split vertically so that it stands up, stuffed with the crab. Neal later said that it looked ridiculous. “Sandwiches should lie down and take their punishment,” he joked. My sandwich, an indulgent BLT with a fried egg, was indeed lying down waiting for me to slide the egg off onto a plate rather than risk the mess of melting yolk. The bacon was thick-cut and chewy, and the lettuce and tomato fresh and delicious. I briefly had menu envy over David’s cucumber and radish salad until I dug into my side of incredibly fresh greens with a light drizzle of a dressing. I’d like to think that made up a little for all the fried stuff in front of me.

We passed on dessert, as David had a mind to walk around Broad Street, and I figured that I might find something there to try. Broad Street is a curious and old little strip of mainly lunch-only restaurants, catering to downtown businessmen, GSU students and, lately, Occupy Wall Streeters. I almost went for a gelato, but I was taken by the line coming out of Rosa’s Pizza, and decided that a slice would be my dessert. 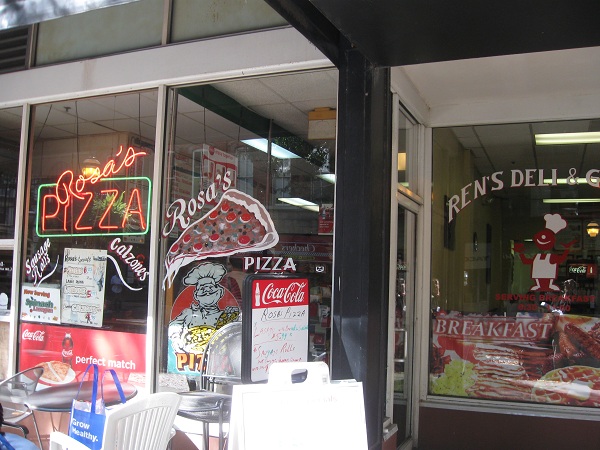 Interestingly, there are two different Rosa’s in the region. If I understand correctly, the one downtown, with a second location near me in Cobb County’s Lassiter district, is not affiliated with the Rosa’s in Johns Creek.

Anyway, this place offers New York-style by-the-slice pies. The pies are actually made ahead of time with sauce and cheese, and toppings added as guests file slowly past the oven, logjamming at the register, where a hilarious woman takes payment for orders. The staff is lovably sassy and fun. The fellow assembling toppings fruitlessly negotiated with the girl ahead of me to bring him back a beer from a neighborhood bottle shop, and she gave me some playful stink about ordering anchovies, turning her head as she held the offending box at arm’s length and yelping a Pythonesque “Wurrrrgh!”

I left the restaurant laughing. The pizza was not really anything special – my heart sank a little when I saw the premade pies awaiting reheating in the oven – but the lively and fun atmosphere had me eating it in a good mood.

Other blog posts about One Eared Stag:

2 thoughts on “One Eared Stag and Rosa’s Pizza, Atlanta GA”