The last time that I went out to try some local Indian food, I found myself choking back the tears at the nearly too-hot-for-words Planet Bombay. So, a couple of weeks later, when the sidewalk took me to NaanStop at its first brick-and-mortar store in Atlanta, I decided to sample a wider range of flavors other than “painful.” The restaurant has joined many others on the shaded lane of Broad Street, next door to Rosa’s Pizza, serving up quick “street food”-inspired Indian meals for GSU students and bankers in the area. I had read a little buzz about NaanStop opening, and walked the six-tenths of a mile from my job to get there as they opened a couple of Fridays back.

Neal and Samir Idnani had run NaanStop as a food truck in Los Angeles until they closed it at the end of last year and moved back to the southeast. The brothers were born in Nashville, and Samir attended Georgia Tech, and they figured that California had enough of this sort of food; they were needed back home. Angelenos are already missing the Idnanis’ much-loved masala fries, which I think they only got to know for about a year. These are quite curious and fun, but they sure could be a lot better. They taste like bottom-rung frozen fries, enlivened by ladles of a creamy yogurt and a medium-spicy masala sauce. It is an okay little side, but it could be a terrific one if they used better potatoes. 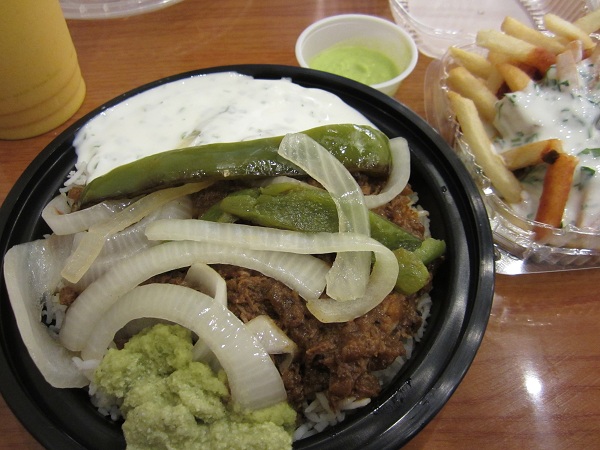 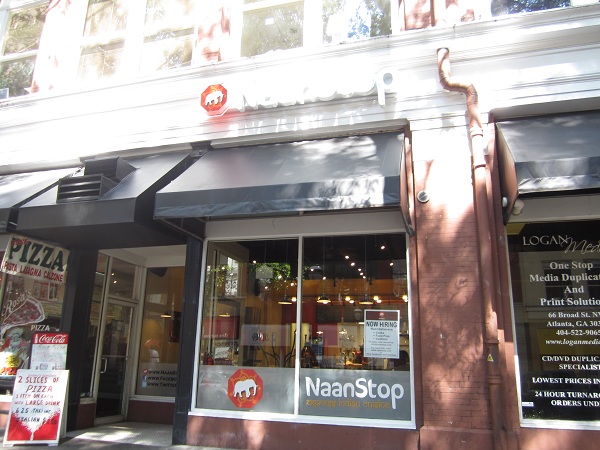 Their various main courses, priced between six and eight dollars, are available in bowls over rice, as salads, or in naan wraps, served like a gyro sandwich. The “naan’wich” appeared to be the most popular among the people that lined up behind me for carry-out. I went with the lamb curry, which was very good and really mild. This was very flavorful, slow-roasted lamb with grilled onions and peppers. They’ll then add sauces over your entree, whether you’re ordering chicken tikka marsala or turkey kabob or any of the other offerings. I went with the creamy cilantro yogurt, the same stuff that comes on the fries, and a tingly hot green mix of coconut, mint and cilantro.

This was not bad at all, but I am a little concerned about the prices here. Admittedly, I ordered the most expensive entree, and I didn’t need the $3 mango lassi – it was terrific, but a definite splurge – but a $15 lunch is a once-in-a-while treat for me, and if the comments on Yelp are any indication, quite a few Georgia State students are suffering from sticker shock as they emerge, blinking, into the Broad Street shadows. The food is pretty good and the staff is really on the ball, let’s hope the line continues to stretch outside.

Other blog posts about NaanStop (in L.A.):