We’ve hinted before that Urbanspoon has a flaw or two in it – just hop back two chapters – but that shouldn’t release restaurant owners from the responsibility of taking advantage of the darn thing. Take Jerk Kitchen for example. This is a pretty darn good Jamaican restaurant that’s just down the road from us, and it’s been there for almost a year without us knowing anything about it. The owners, a husband and wife from Kingston, working with a chef from Montego, chose what looks like a murderously tough space on the far end of a strip mall, sort of in the elbow between a Wal-Mart and one of those Chinese super buffet places. We never even look in the direction of either of those businesses, and had no idea this place was here. We only found it one Friday evening when, unsure what to eat, we started paging through the “recently added” restaurant list in Urbanspoon and found it listed, about ten months late.

That, in itself, was pretty amusing. “Cobb Restaurants,” on that service, is not the same as the much smaller “Cobb County,” where we live. Urbanspoon’s Cobb is a gigantic sweep of land that stretches from Douglasville up to Taylorsville and east to Canton. This is a huge, huge area of land, carved up by four million roads and punctuated by five million traffic lights. We’re willing to drive an hour for a meal, because we enjoy ourselves, but probably not on a Friday evening after work, when what Marie most wants to do is probably play with the baby while calculating how many of the hours of sleep that she “lost” over the previous five nights she might be able to reclaim later this evening before I cruelly wake her and throw the baby and the diaper bag in the car and drive a hundred miles for a chili dog somebody once told me about.

No, having a toddler has robbed us of any adventurous spirit on Friday evenings. But I saw a spark of it in Marie’s eyes when I told her that there was a Jamaican place just down the road. She enjoys Jamaican cuisine much, much more than I do, and misses occasionally going to lunch at Calypso Cafe as she used to when she worked downtown. 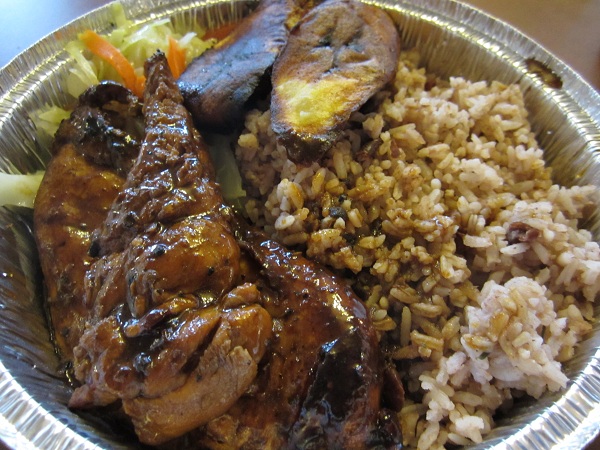 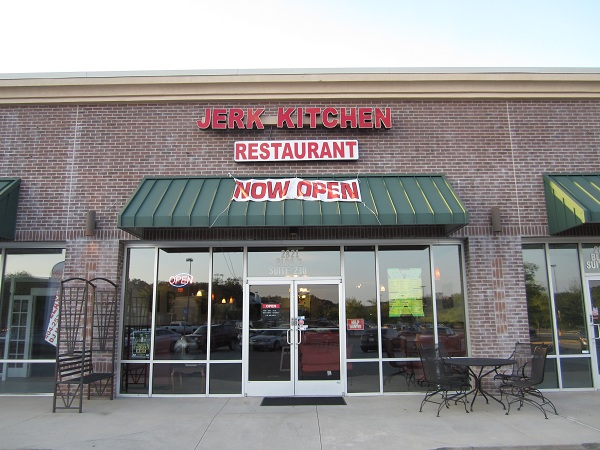 Marie ordered the brown stew chicken and I had standard jerk chicken. They were good enough to substitute a boneless chicken breast instead of the standard bone-in chicken. The dinner plates are served with rice, steamed vegetables and plantains. Like any respectable Jamaican restaurant, they offer a full line of D&G bottled sodas, including Kola Champagne and Ginger Beer.

This is a pretty good restaurant. We got a respectable amount of food for not very much money, enjoyed kicking back and watching a little television news, let the baby share some rice and veggies and just generally didn’t worry about much of anything for a while. Marie enjoyed her meal more than I did mine, but that was to be expected. I’m sure we’ll go back sometime soon and try some other things on the menu. I might give their quite nontraditional “rasta pasta” a chance. Then, like most Friday nights from the last few months, we’ll probably go home and crash at our boring parent-friendly hour, and Marie will hope that she’ll sleep for nine or ten hours. Ah, parenthood.