Marie and I are occasionally asked how on earth we eat out as often as we do, and the truth is that we honestly don’t, not as much as we may appear. She cooks most evenings – and she cooks amazingly well – and our lunches are frequently either leftovers or deli sandwiches. I believe that what we do differently from many people is that we plan in advance and don’t waste meals on convenience or fast food, and when we do go out, we don’t often revisit a place, even if we enjoyed it. Certainly, there are exceptions – we can be found, many Tuesdays, having our family supper at Cheeseburger Bobby’s – and admittedly, we indulge on road trips, but for our staying-in-Atlanta meals, it’s reasonably simple to come up with four chapters a week and not burst the budget, especially since we often eat at two new places on Saturdays.

And then we found Bell Street Burritos. That’s what made it difficult for the budget; suddenly, I stopped wanting to have lunches from home five days a week, and eat here instead at least a couple of times a month. Earlier this month, Bell Street took away the double-prize from the AJC, winning among both the newspaper’s critics and readers as the best burritos in the city. They’re absolutely right. The owner, Matt Hinton, has completely nailed it. I loved, loved, loved eating here, and very sorry to see the Howell Mill location close.

Most objectionably, it closed not because of slow business, but because the land’s owners decided to sell out from under his two tenants. As if this patch of Howell Mill wasn’t enough of a traffic logjam, he decided to sell to Advance Auto Parts, who’ll be opening another store here in 2013. I suppose, having watched politicians with whom I agree praise the recovery of the American auto industry, including factories and retailers who sell parts, I should be happy to see business recovering, but damnation, not at the expense of just about my favorite restaurant in the city!

Happily, there’s a silver lining. The original location in the Sweet Auburn Curb Market is still open for lunch during the week, and, after a week off, Bell Street opened a new location in the Irwin Street Market in the Old Fourth Ward. And it’s just as wonderful as the Howell Mill store. Plus, there’s a really great treat just outside the door. 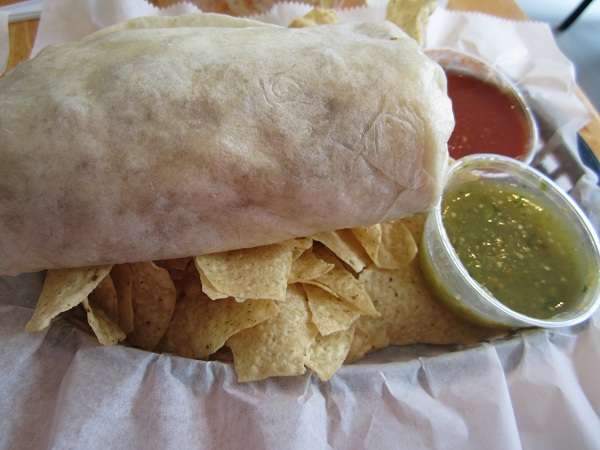 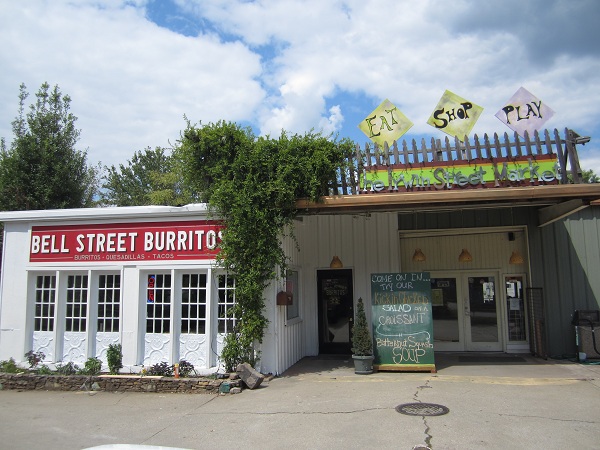 I have not tried very many things on the menu yet, because I keep coming back to the green chile burrito. I get it without rice – the darn things are so comically big already that rice just makes them three times as likely to fall apart – and ask for jalapenos and red sauce. It is unbelievably tasty, and it ranks a shockingly close second to the astonishing meals that I used to get from the still sadly missed Mean Bean in Athens. I could eat these all the time. With chips and cups of red or green sauce, one of these is a remarkably filling and satisfying meal.

But guests to the Irwin Street Market will definitely want to leave room for dessert, because just three or four paces away, there’s a Jake’s Ice Cream counter. 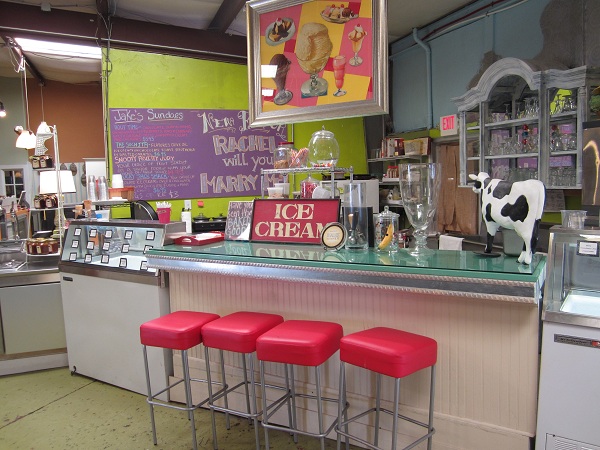 I do like this market. It’s small and colorful and home to a coffee shop and a little chocolate counter, among other things. Parking seems to be at a premium, but you can’t have everything. But Jake’s… well, yes. Now, Morelli’s, which is incredibly good, gets all the press and attention. In fact, just this week, Morelli’s will be opening its first location outside the perimeter, and we’re looking forward to telling you all about that. But as good as Morelli’s is, Jake’s is even better. I still grumble about the closure of their store in Decatur, and so I’m very glad to see this one. While I sipped on my brown sugah vanillah milkshake – there’s none better – I asked about the oddly-named new flavor on the chalkboard. Five months ago, one of their regulars proposed to his sweetie with a custom ice cream flavor. DAWWWWWW! That is so cute!

If I wasn’t already drinking down a milkshake, I would have had to order a scoop of that. Reckon Marie and I will just have to come by for supper or dessert sometime and try it out.