I gave in to an absurdly nostalgic day in the Classic City a couple of Fridays back, revisiting old haunts, walking around, having some beer and reading. I did not eat as much as I might have; my trip coincided with a social media-led lunch at Weaver D’s, the world-famous meat-n-three that has been having some financial difficulties. When word got out that Dexter Weaver needed his guests to come on back, they did so in droves. I don’t know whether it sparked enough of a reminder to get people back here regularly; time will tell. It didn’t for Harold’s Barbecue in Atlanta. Nevertheless, there was enough of a mob and parking was impractical, so I wished him well and moved on.

I spent about an hour visiting with Devlin at Bizarro Wuxtry and catching up on gossip before walking down to The Globe for a couple of pints and finished reading most of the Robert B. Parker novel that I brought along. A dozen years before, I was a semi-regular here. I believe that it was Thursday afternoons that various students learning French, like myself, attempted to do so casually here, while their graduate instructors provided polite encouragement. I enjoyed a glass of the local Terrapin brewery’s rye pale ale, and a glass of Bellhaven Scottish ale before moving along to get something to eat. The Globe is a superb bar with a wonderfully good staff who enjoy beer and enjoy their jobs. As I attempted to explain in our recent interview on the Find Dining podcast, the Globe is something of a spiritual ancestor of the amazing Brick Store Pub in Decatur. 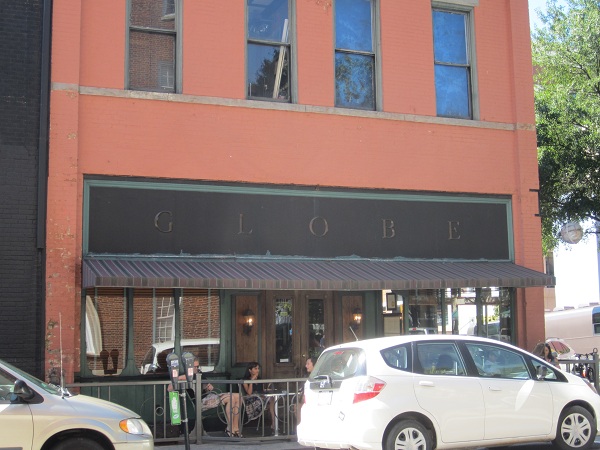 I took some pictures, walked around the block, and drove down to Five Points to stop by the popular new Hubee D’s. This is the third location of this small chain based in Charleston. A fourth is apparently planned to open in Charlotte soon, according to their carry-out menu. This is a traditional tenders-n-wings joint along the lines of Guthrie’s or Zaxby’s or Raising Cane’s, but this meat is really something else. They declare that their chicken is always fresh and never frozen, and the buttermilk batter makes a big difference. The tenders come out extremely hot, leaving guests cooling their heels and enjoying some complementary boiled peanuts while they wait.

With amazingly excellent hand-cut thin fries and a choice of seven sauces – and no stingy charges for trying several different ones – this is a completely splendid little place for student budgets. Accepting that it is a little more expensive than a Zaxby’s, the quality of the food is exponentially better, and you just get a huge pile of these great fries in a basket. The wings are available as a naked dry rub or tossed in sauce, the slaw is quite wonderfully vinegary, and despite the forced, corporate look to the place, it feels very much like everybody in the kitchen cares a lot about what they’re doing. I like this place a lot better than I liked Guthrie’s when I was an undergraduate. 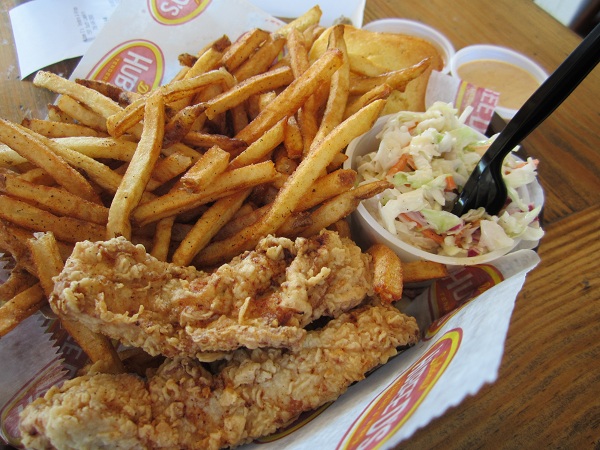 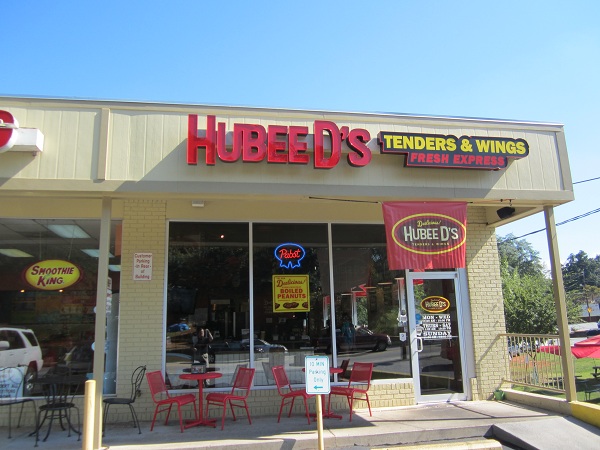 Well, when I was an undergraduate, one of my favorite hobbies was buying import 7-inch and 12-inch singles from all my favorite British new wave musicians. Wuxtry and Ruthless had boxes and boxes of ’em, priced at $2 or $3 each, thanks to original-release Durannies and their peers selling off all of their expensive imports as their interest waned. I still have lots of them, and these old purchases came to play at my next stop. Now, I was not planning on a visit to the much-loved Taco Stand, but I had a craving for something that I can’t get anymore, and I wanted the next best thing.

See, regular readers know that Marie and I are crazy for Bell Street Burritos in Atlanta, an amazing place that makes the best burritos anywhere since Athens’ dearly missed Mean Bean closed in 2008. What Matt and his excellent crew don’t do, however, is use refried beans, and their tacos are traditional, Mexican-style tacqueria tacos, and not those wonderful and gigantic messy things that the Mean Bean made. In big, oversized, hard shells, they’d fill you with those perfectly spiced refried beans, a thin spoonful of hot sauce, lettuce, tomatoes, and a heaping pile of shredded cheese. There is nothing, anywhere, like those that I have found. The Taco Stand’s bean taco is a reasonable enough facsimile, but not quite right. Everything’s off just a hair, and much smaller, but it was reminiscent enough to satisfy the craving.

Bell Street is indeed amazing and makes me very happy, but I’ll tell you, friends, if there was a way to bring the Mean Bean forward through a crack in time and into this mean and ugly world, it’d be worth the planet to me. 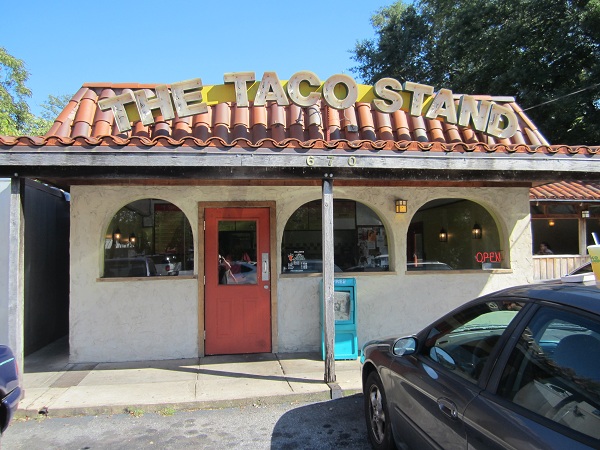 So I placed my order for a bean taco and a bag of chips and settled down with P.D. James – I finished Parker at Hubee D’s – while the Sirius XFM station made kewl zapping noises and a DJ spoke through some modulator, and then “New Song” by Howard Jones started. It was followed by “Union of the Snake” by Duran Duran, and “The Bitterest Pill” by the Jam. These songs all predated my undergraduate days in Athens by years, but, and this has to be the wildest coincidence in the history of music, I remember specifically buying all three of those 12-inch singles from Wuxtry for $2 or $3 apiece one Friday evening in the spring of 1990 with a friend named Lisa, along with one other record. Seriously, that Jam record started, and I was looking around, mouth agape, saying “No way. There is just no way.” I want to say that the Duran record was the cheapest because the back cover was really beat up, and one of the flaps a little loose.

I remembered the fourth record. It was “She’s in Parties” by Bauhaus. I dipped a chip in the Stand’s perfect hot sauce and willed Paul Weller to shut up and stop being as nostalgic as me, so they could get to the next song. If I heard Peter Murphy, that was it, I was selling the house and coming home. Athens wanted me back.

It wasn’t Bauhaus. It was Adam Ant singing “Strip.” I never owned that record.

I laughed, left, stopped a little ways up the road to stretch my legs and do a little walking, and drove on west to get some early supper. It was a very good visit, and proved that if you can’t exactly and precisely go home again, you can sometimes get about three-quarters there.

4 thoughts on “Nostalgia Burns in the Hearts of the Bulldogs”