About a year ago, I described a little drive that I took with my daughter and baby boy up through Hoschton and Winder to Athens and back, passing two barbecue joints along the way with which I was unfamiliar. I intended then to come back to Winder, and it is actually becoming depressing to realize just how long it is taking us to get back to some of these places. There’s never enough time or money, but I really would like to provide a little better documentation of the world of barbecue restaurants in this region, and we’re not getting any younger. Probably not the wisest course of action to think about such things after spending about five hours wandering about campus, visiting the ol’ comic book store and listening to early ’80s British chart music, honestly.

Anyway, you young whippersnappers, I drove back along the old Atlanta Highway to Winder, seat of Barrow County and, since 2004, home of Smokin’ Po-Boys, a teeny little restaurant in the downtown area next door to a NAPA Auto Parts store, and an enticingly large parking lot that’s off-limits to hungry guests. Fortunately, Winder’s one of those towns with a fair amount of free street parking. I was not exceptionally hungry, but I thought about the traffic that would be building along Atlanta’s interstates around 5 pm on a Friday, and decided to try and wait out some of it with an early supper. This sensible plan was doomed to failure; unfamiliar with the traffic flow around this side of town, I would end up hitting the backup on the Dacula side of 29 at 6.15 and it would stay awful until I finally got home a little more than ninety minutes later. Well, I know for next time. 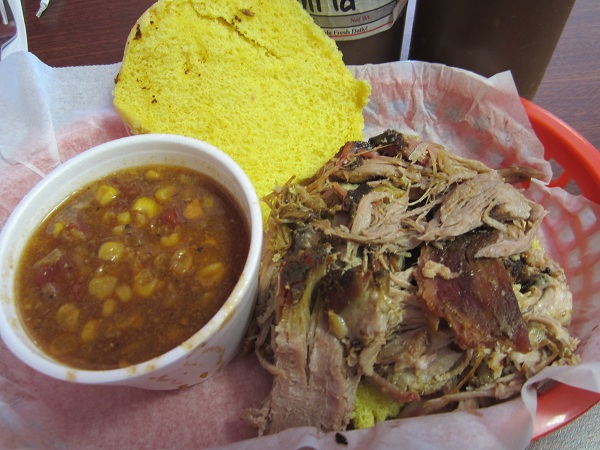 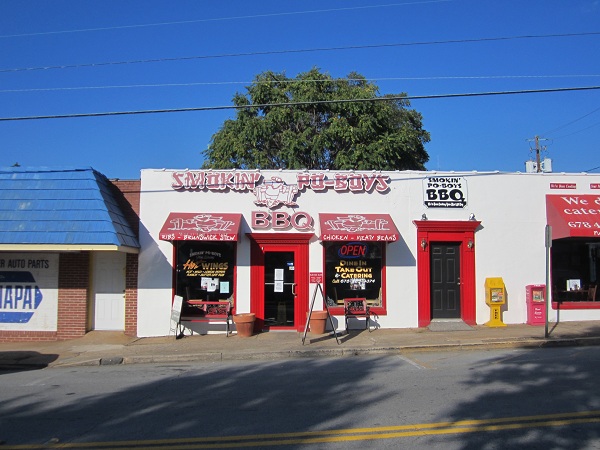 But before I found myself in a long line of cars just a’movin’ out of town, I was happy to enjoy some very good pulled pork and some completely fantastic stew. There are four sauces available: hot and mild varieties of a traditional red tomato-vinegar mix, a thinner vinegar sauce, and a thick brown sweet sauce. They’re all pretty good, but not particularly necessary. The pork, smoked for about eight hours over water oak, is just super on its own. The restaurant is particularly proud of its pulled pork, and with very good reason.

This stew, however, is something else entirely. This ranks up there with the very best I’ve ever had. I asked the fellow at the register about it, and he explained with pride that they smoke everything here, even the beans and stew. After the stew is brewed, the pot is placed in the smoker along with the meats for about half an hour. I imagine that’s what gives it this incredibly rich taste.

I had taken an exercise break in Athens a little earlier, but I believe that what I should have done next was pulled into Fort Yargo State Park after this last meal and spent a good hour walking. It would have been a little better for me, and certainly more sensible than fighting Atlanta traffic. Fort Yargo is not even ten minutes drive from Smokin’ Po-Boys, and if any of our readers would like to go try this remarkable stew, we certainly encourage you to give the park a visit.

As for me, you’ll be pleased to know that while I didn’t get a lot of exercise the next day – I had football to watch, none of it particularly pleasant – I also ate very, very sensibly and had lots of vegetables. I certainly didn’t indulge in anything as unhealthy as the big, weird, sloppy cheese pizza that Marie and the girlchild were enjoying down in Brunswick, but that’s another story.