This is Marie, contributing an article about a pizza that the teenage girl in our life enjoyed enough to threaten matrimony against the chef. Mind you, she would have to jilt some cupcakes she proposed to recently in order to be free.

Originally the plan had been to have breakfast for lunch, or possibly fried chicken, at a cute little place in Brunswick with an interesting history called Grits, which has no web presence whatsoever. We will need to fix that on our next visit. However, based on pleas from the aforementioned teenage girl as we passed this place on our way, we had pizza instead, to her great delight.

Fox’s is family-owned and has been around for pretty close to as long as I have, if you count from the original location which involved second-hand equipment rescued from a dump! They count their start from the second location 38 years ago, when they claim to have started the idea of home delivery for pizza in the Pittsburgh area. While that isn’t quite as glamorous as the first documented pizza delivery, which was to the queen of Italy (yes, I had to look up who invented pizza delivery when I saw their note about delivery on the restaurant website!) it’s still apparently a cornerstone of their initial success that let them branch out. 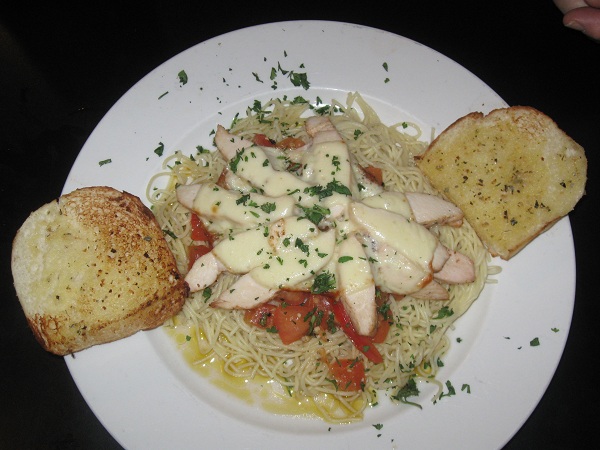 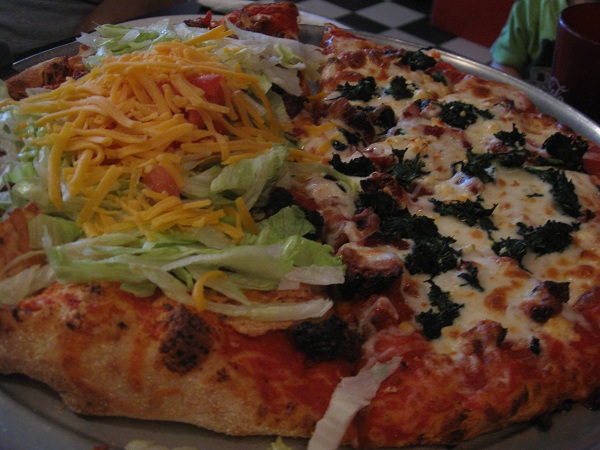 Since the giirlchild had made the choice for the place, I was particularly interested in what she would get, and was not disappointed. The thing that specifically drew her attention on the menu was the taco pizza. She made her choice for topping her half of the pizza with remarkable speed on seeing that option. I seriously think she would eat taco ice cream if they made that flavor. Well, maybe once. Anyway, the pizza came out with her half covered in fresh lettuce and tomato, with taco sauce instead of regular tomato, and she had to ooh and aah over it for a moment before digging in. My father had a chicken pasta dish with a really interesting and different vinegary sauce. My half of the pizza was a little more standard, but I do have a tendency to try to test a place based on what they do with simple things. Simple is sometimes the hardest thing to do.

I didn’t have a lot of food for the baby considering that I’d originally intended for him to eat off of my plate at a more Southern-style place, and since pizza is a little out of his grasp right now my food options for him consisted primarily of snacks. He however had a grand time with a bowl of olives from the topping list, and ate his way through half of them before deciding the veggies looked better on his pants and the floor than in his mouth. He’s going to be a challenge for the next couple of years! Luckily the wait staff was really nice about it. And I got him a hot dog afterward from Hot Dog Alley on St. Simons, which he enjoyed tremendously.

Fox’s is a fairly large chain – close to 150 locations in 29 states – with the look of a local place. It also, ironically, has a branch on St. Simons, so we could have saved gas and time by going there rather than to the mainland if we’d known the plans were changing. However, then we would not have had the chance to look at the pretty views along the causeway, discuss cabbages and kings (actually history and languages) and give the toddler a much-needed nap on our way home. And I got Good Stepmother points by the change of venue, which are valuable things indeed. But the food was good enough that it was in no way a hardship, and while this chain is a larger one than we would normally attend, it has avoided many of the downfalls of the big pizza chains. It’s a pleasant place, and when we left every table except for two outside was full. I would go again, but to the one on the island rather than the one in town!