Brunswick reminds me of Columbus in the late 1990s. There’s life to be seen, and people who want their city to shine, but there’s some kind of kick in the pants needed to get the local economy moving. In the case of Columbus, that was the twin engines of an uptown that embraced several bars, coffee shops, and boutique stores that catered to the younger people of the city, and then Columbus State University deciding to invest heavily in building some dormitories on top of the growing noise, giving constant turnover of people to frequent the businesses on their block. Last we heard, some busybodies in Muscogee County had been griping that Young People Trying to Study don’t need the temptation of the demon drink, but I don’t think they’ve got far. I have it on good authority that the Uptown Tap on Broadway does a wild amount of business on Monday evenings.

Brunswick… well, it has a ways to go. For all the time we’ve been going to visit Marie’s family, we had still seen extremely little of the city. We’ve seen enough for my daughter and me to embrace a deeply silly and very inaccurate recurring joke about every street in town being called Altama. This joke has, to hear Marie tell it, become very, very tedious. Marie showed me the downtown once. Night had fallen, she drove me through it and said “Now you’ve seen it.”

Our daughter had seen a little more of it than me; last October, while I was in – coincidentally enough – Columbus, she and Marie visited Fox’s Pizza Den on Newcastle Street. On our most recent trip, we parked in front of Fox’s and walked down to the Glynn County Library to let the baby run around, read, enjoy a little air conditioning, and to let me figure out where else we should eat on this visit. I had half a mind to make another trip to Willie’s Wee-Nee Wagon, which, no kidding, is on Altama, for a pork chop sandwich and a bucket of tea, but I wondered whether I could find out what the oldest restaurant in the city was, and whether it was worth a visit. I learned that Twin Oaks (alternately called “Twin Oaks BBQ,” “Twin Oaks Drive-In” and “Twin Oaks Restaurant,” depending where you look) celebrated its 70th anniversary a few months ago. That impressed me enough to decide we’d go visit. 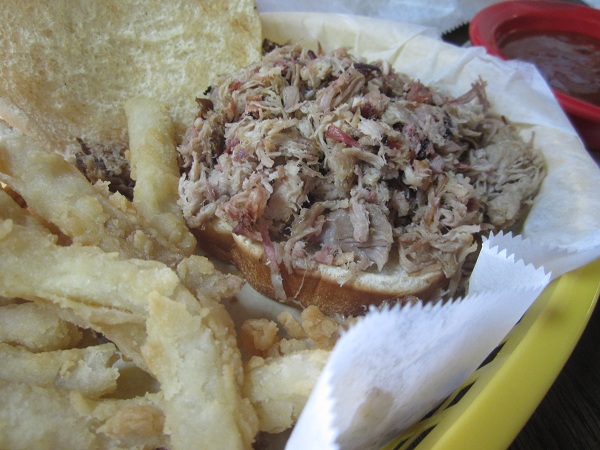 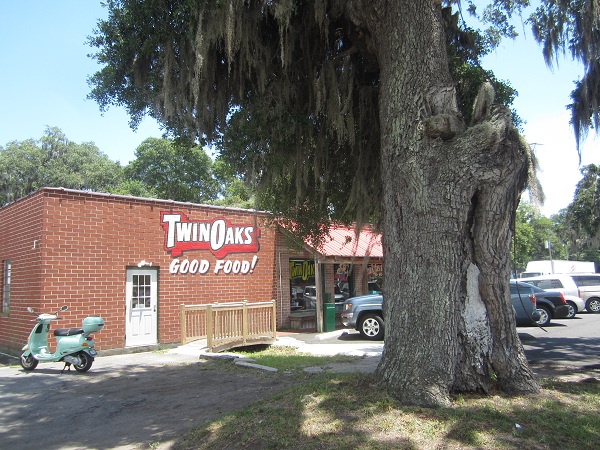 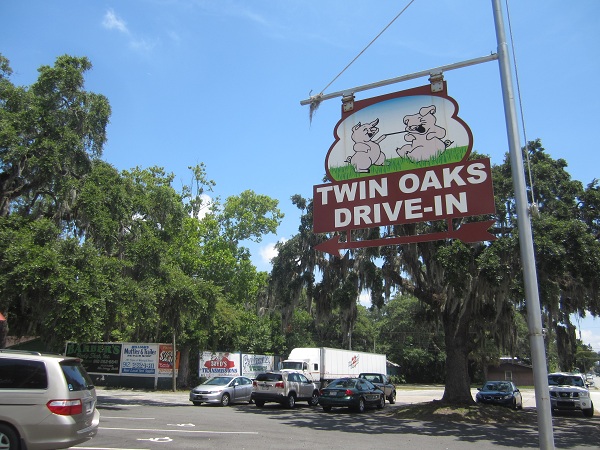 We gulped in one long, last inhalation of cool air and stepped back out into the merciless south Georgia July and found our way to Twin Oaks. Sadly, this is not an old-fashioned canopied drive-in, although I understand that a one-time business rival, The Pig & Whistle, had one in the 1950s. Twin Oaks still has curb service along one side of the building, and a terrific back wall of the property covered with billboards advertising local businesses. It did not occur to me for a few days, but I wonder whether, decades ago, that fence held menus and curb service was directed back there?

Twin Oaks was opened in 1943 by Maurice Zell, who started the menu of barbecue, burgers, and very peculiar fries. These aren’t simple frozen fries, or freshly hand-cut, but done up in a batter and served up a little chewy. I wouldn’t go so far to claim battered fries as a particular coastal Georgia specialty, but they’re downright odd and uncommon. Battered fries are also available, Marie reminds me, at the Crab Trap on Saint Simons. Does anybody know of any other places that serve them?

In 1943, my grandfather lived in Brunswick. He was among the thousands who moved his family here during the war to build battleships. My dad would have been four at the time. They stayed for two years, I believe. They could have eaten here.

Today, the restaurant is owned by Darlene and Dub Waters. It draws an older crowd, as older restaurants tend to do, but it’s wildly busy for lunch. The barbecue is smoked behind the building over oak, and served with either a sweet brown or a hotter brown sauce. It’s pretty good, but not really a knockout to my mind.

Interstate travelers who recall the Georgia Pig might find these flavors familiar. I thought this tasted quite similar to how the Georgia Pig tasted on my lone visit two years ago, but the service at Twin Oaks is something like a million times better than the grouchy crankiness for which the Georgia Pig was infamous. Between the small conversations that we had with both our server and with Dub, who was working the register and gave our toddler a Tootsie Pop when we left, these are awesome people who give 110%. You’ll be hard pressed to find better in Glynn County.

I’m honor-bound to point out, however, that three of the walls in the back dining room are papered with uninspired nostalgia photos of Marilyn Monroe and James Dean, including that dreary poster of them sharing a milkshake. It’s actually accompanied by a variation on the theme, in which they are hanging out with Elvis and Humphrey Bogart in the desert! But never mind those, check out the fourth wall of that room. People have been gifting Twin Oaks with photos of themselves and hot rods from the 1950s and 1960s, resulting in a beautiful little museum of the people of the area, wanting to be remembered in a restaurant that’s meant a lot for so many people for so many years.