I have mentioned that I keep a little to-do list of restaurants that I hope to visit one day. Actually, it’s gone a little past the point where we can call it a list. It is more like a novella. Towards the end of February, I read a short mention of Brunswick’s famous Willie’s Wee Nee Wagon and decided that we needed to stop by. At that point, we were actually just about two weeks from a visit to the coast, but, as you might have ascertained, Marie and I sort of plan our trips out somewhat in advance, and I already had plans that didn’t include swinging past the Wagon. So I was a little surprised when we did.

Marie lived on Saint Simons Island for about four years before she moved to Vermont to attend college, so she has plenty of small nostalgic memories that can only be filled by occasionally driving around and past places. This has meant, viewing the area as a passenger as she takes the wheel around Brunswick, that there is no place in America that I have visited so often and understand so little. She can find her way from the interstate to the causeway via seven hundred and ninety-nine routes, blindfolded. This doesn’t do me any good whatsoever, as every time we’re there, I see something completely different. The morning of our wedding, I visited my parents at the hotel on the mainland, and spent the better part of an hour trying to find my way back to the island. It seemed like every time I tried a different road, it was Altama Avenue. It’s become a pretty labored in-joke that every other street in town is called Altama. My daughter and I still find it funny, anyway.

So anyway, in early March, I hung on for dear life as Marie navigated the labyrinth and I spotted Willie’s Wee Nee Wagon on the right. As we sped past, I said something like, “Hey! That’s that place… I want to eat there sometime!” I didn’t expect that I’d ever see it again, the way Marie tackles that city’s streets, so I figured I had better say something and mark it before we lost it for good. 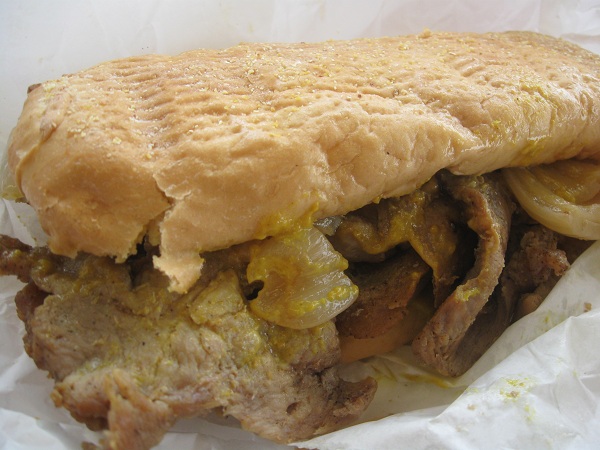 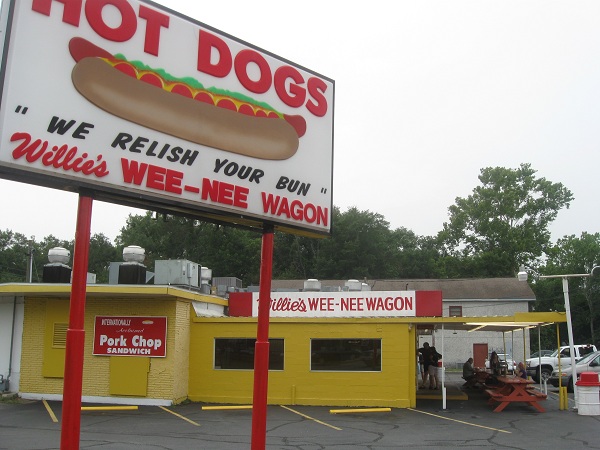 Our June trip to Saint Simons was almost delayed by a week thanks to the wildfires in south Georgia. Smoke from the giant blazes at the Okeefenokee Swamp has been choking the air for hundreds of miles up and down the coast. Our friend Chris came up from Jacksonville to meet us on the Friday night, and he told us that he’d been having trouble breathing because of the smoke. Marie’s father told us that the day before we arrived, you couldn’t even see Jekyll Island from the Saint Simons pier. Fortunately, there was a heavy rain on Wednesday night that cleared the air a good deal. It continued to drizzle on and off Thursday before really opening up at night. This was a very happy bit of timing. We were able to enjoy the coast without incident, and the ocean water felt wonderful. In the case of Willie’s Wee Nee Wagon, the rain had cooled things off enough for us to sit at their picnic tables in comfort.

You’ve probably figured out by now that Marie and I enjoy a good hot dog better than most people do, but the real treat here was said to be the pork chop sandwich. I left Marie and our daughter to tackling the dogs while I had one of these bad boys, and it was just terrific. It’s a giant, bulging heap of sliced, boneless pork with onions and mustard inside a really wonderful, tasty bun. They’ve been serving these up since the 1970s – every sandwich, although not the dogs, comes with a similarly giant cup of delicious tea – and making believers out of everybody. This is one of the tastiest treats that we’ve ever had in Glynn County.

The dogs themselves are also really good. They’re perhaps on a rung below the three best hot dog places in Atlanta, but honestly, that ladder’s so high, most people wouldn’t be willing to complain. Neither Marie nor our daughter were feeling at all adventurous. The girlchild simply had a “kiddie” dog with ketchup, and Marie had a slaw dog. If I had room, I might have wanted to try their “bull dog,” which is dressed like a cheeseburger with slaw. The “Brunswick dog” is dressed with ketchup, grilled onions and cheese. It all sounds great, and if the bite that I had of Marie’s is any indication, it probably tastes terrific, too. The dogs have a little bit of snap to their case, and they’re served on really good poppyseed buns. The slaw is quite green and not watery at all, and that’s a perfect recipe for going really well with a hot dog.

As the next two chapters will show, this trip to the island saw us visiting some restaurants that, while good, were slightly underwhelming, and for the first time, we had better food on the mainland. In point of fact, there wasn’t a dish we had that didn’t leave me saying to myself, “That was pretty good, but you know, another trip to Willie’s would have been better.” The food is that tasty and the experience was that fun; it accomplished the implausible and overshadowed just about everything else that we ate in south Georgia.