O4W Pizza is a new restaurant, probably not very well-known outside of town, but it has a legion of fans. It opened in the summer of 2015, and within six months, four of the writers surveyed for Eater Atlanta’s year-end list of Top Restaurant Standbys of 2015 named it. That’s a pretty incredible rate of return for something so new! The downside is that parking at the Irwin Street Market, which is home to O4W – it stands for Old Fourth Ward – and a couple of other restaurants is really tricky, so come early with two or three friends to share the Grandma’s Pie, a square, thin-crusted treat with oozing homemade Marinara sauce. You’ll see why this won so many plaudits so very quickly. END_OF_DOCUMENT_TOKEN_TO_BE_REPLACED

This is Marie, contributing a description of a visit to Chow Bing, a Chinese restaurant in a tough location that I hope it can overcome. With any luck the Grady Hospital staff will discover the place and prop it up as more people discover it. It’s just around the curve from the hospital in the new Pencil Factory Lofts building. END_OF_DOCUMENT_TOKEN_TO_BE_REPLACED

There are many places that I’ve read about and said “Hmmm, I’d like to go there,” and many others that I’ve read about and said “I’d like to go there along with Marie.” That’s the case with Edgewood Corner Tavern in the Old Fourth Ward. It’s one of four Corner Taverns in the city, the most popular of which is probably the one in Little Five Points. Each of them has their own specialties, along with a dense menu of reliable bar food and a very satisfactory and deep list of beers, but the Edgewood location was spotlighted last year in this report at A Hamburger Today. END_OF_DOCUMENT_TOKEN_TO_BE_REPLACED

Marie and I are occasionally asked how on earth we eat out as often as we do, and the truth is that we honestly don’t, not as much as we may appear. She cooks most evenings – and she cooks amazingly well – and our lunches are frequently either leftovers or deli sandwiches. I believe that what we do differently from many people is that we plan in advance and don’t waste meals on convenience or fast food, and when we do go out, we don’t often revisit a place, even if we enjoyed it. Certainly, there are exceptions – we can be found, many Tuesdays, having our family supper at Cheeseburger Bobby’s – and admittedly, we indulge on road trips, but for our staying-in-Atlanta meals, it’s reasonably simple to come up with four chapters a week and not burst the budget, especially since we often eat at two new places on Saturdays. END_OF_DOCUMENT_TOKEN_TO_BE_REPLACED

Date night! Marie and I got a very pleasant surprise from her father when he came to visit last weekend. He gave us a big wad of money and told us to go enjoy each other’s company at a nice restaurant or two while he watched the children and read A.A. Milne to his new grandson. Unfortunately, I left it too late to make reservations at Two Urban Licks, so I went with a backup plan, The Sound Table. This is a popular new place, just starting its second year, at the intersection of Edgewood and Boulevard in the Old Fourth Ward neighborhood, and its chef and owners had previously collaborated on the popular Top FLR.

Marie and I enjoyed a very good meal here. We were early, before it apparently gets pretty loud, and got to enjoy some conversation without yelling across the table to each other. They have an amazing cocktail list here, for diners looking for something unusual. I was briefly tempted by a simple glass of Cointreau and orange juice – it really has been a while since I had one – but we just had water, as we almost always do.

Sound Table’s menu changes quarterly, and even then they make changes each evening based on what vegetables they can source, so guests will not have much luck reading blogs and getting ideas. That said, we did enjoy an appetizer of fried chickpeas salted with curry and a wonderful small serving of lamb meatballs with Roma tomatoes that got us ready for some excellent entrees. I ordered the hanger steak with a beet salad. This was very simple but so incredibly delicious. It was merely a small plate of arugula, beets, avocado slices and anchovies, but each complemented the other very well. 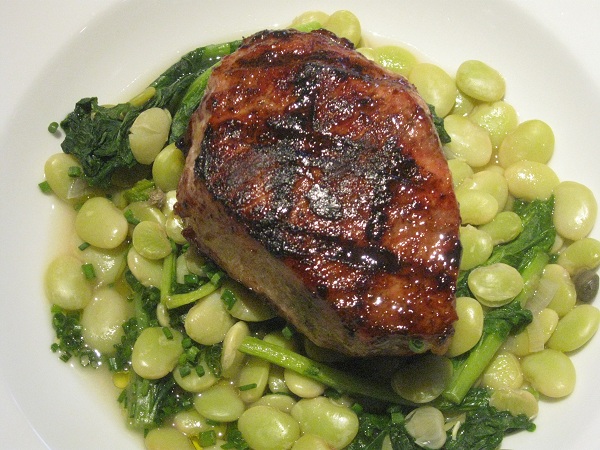 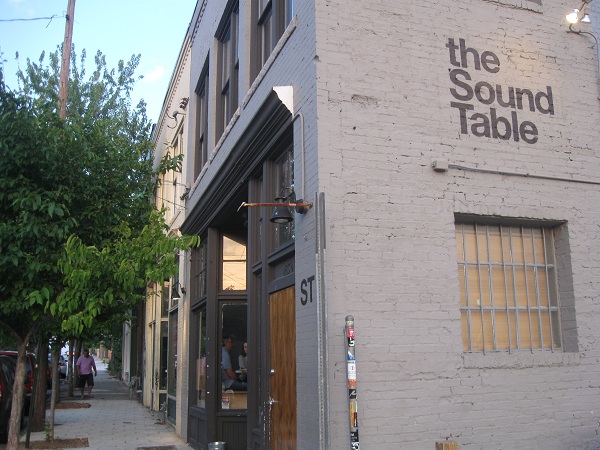 My meal was good enough that I did not quite get menu envy, but I came close. Happily, the perfectly seasoned steak was tasty enough to make it quite a standout. Marie enjoyed a grilled pork chop that was just heavenly, served over butter beans and greens. She also had a bowl – a huge one, as it turns out – of excellent cauliflower, cooked with red curry and peanuts. Everything was extremely tasty and appropriately portioned. This was a very good date night detination.

We passed on dessert, as I had planned to really give Marie’s sweet tooth a workout. Unfortunately, my desire to pick up some caramels from a reasonably new place called The Sugar-Coated Radical was foiled, as they closed earlier than I was planning. We will return some other time, now that we know to arrive before the dinner hour. We drove on instead to Café Intermezzo on Peachtree, near Collier, for some decadent cake, arriving just as the sun was going down. 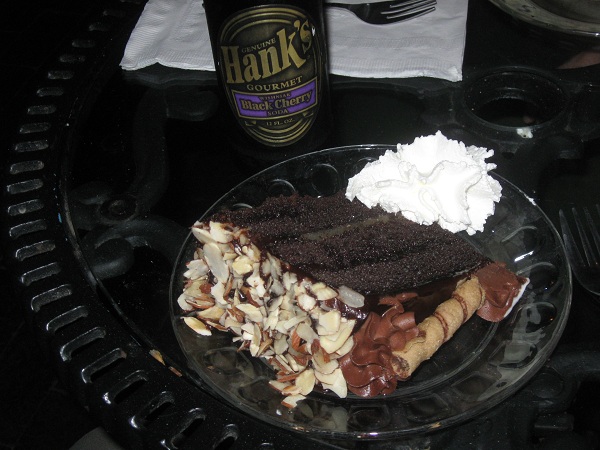 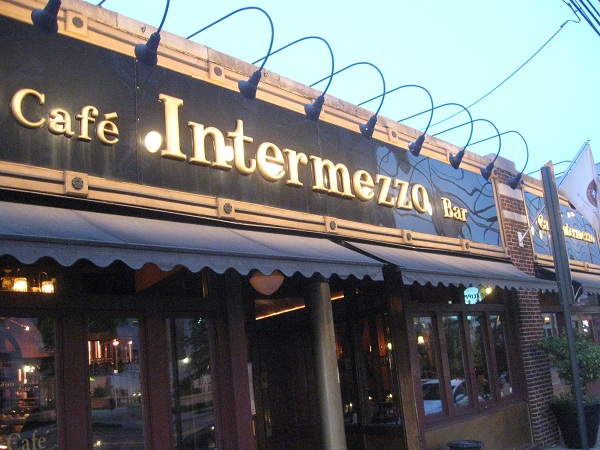 One day, we might return to Café Intermezzo for a full meal; it certainly has an interesting menu. Speaking of which, the drinks menu here – or perhaps “beverage book” is more appropriate, as it’s a full fifty pages long – is just about the most overwhelming and mad thing that I’ve seen in ages. I’ve occasionally wondered whether there might be a place in town, other than the GSU dorms, that serves absinthe, and now I know. Since the days of me drinking myself stupid over some damn girl in French class are long gone, I’ll pass.

Café Intermezzo has a dessert showcase that rivals the ones we see in Cobb County at Marietta Diner and its sister places. A gigantic slice of cake here will run you about eight bucks and you know with every bite that you’re indulging in something sinful. I had choclate and Marie had cheesecake and, somewhere in the beverage book, we noticed that they sell bottles of Hank’s soda. I have been on a black cherry kick lately, although the cream soda that Marie enjoyed probably complmented her cake a little better. Although really, a tall glass of milk might have done just as well.

Eventually, we had to leave the patio and get back to the suburbs, and end our date night, as parents often do, swinging by the grocery store to pick up things for the kids. We’re just so romantic, you know.

Other blog posts about the Sound Table: