Two Saturdays before the election, for the first time, Georgia allowed weekend early voting. While the girlchild spent the morning with her godmother, following a long, late night at Six Flags, Marie and I took the baby to the Cobb County Civic Center and spent a very long time waiting in line. We had a blast.

You might question how this could possibly be true. Nobody likes standing in line, especially with a toddler! Well, we let him take charge and explore, and Marie and I took turns following him and keeping him safe as he rampaged around the grass and the plaza, looking at everything, running around the flagpoles, slapping the shrubs and bushes, and generally having a ball before returning to the line for a hug and a couple of snack crackers, before he was off again and the other parent went out on safety duty. Unfortunately, there would be no such joy inside the building, where there was an additional hour’s wait atop the two we’d spent outside. Knowing that the baby was already winding down, and being cramped in a twisting queue with no chance to let him be free, we had to make a command decision. We came on Saturday because it would be most convenient for Marie, so I left her for the last hour to vote, and carried the baby back to the playground. I’d come back and vote on Thursday.

He was in no mood to leave Mommy, and howled and cried. I amused myself, and a few of the hundreds of people in the line I passed on the way, by loudly telling him “I know, it’s just not fair that babies can’t vote! Those mean old people didn’t let a baby vote!” He cheered up when we got to the playground. Marie joined us an hour later. We had thought about going to the Atlanta Botanical Gardens, but after three hours of standing on pavement, neither of us were ready for that. I’d even picked a new-to-the-blog restaurant on Cheshire Bridge to visit, but we agreed that we’d rather grab something in Marietta and go home.

For lunch, we went to Baldino’s, the excellent place near the Harry’s grocery store that I’ve only visited once or maybe twice since we wrote about it more than a year ago. That’s the price for trying to look for new restaurants and new tastes all the time. In deference to the fact that we had planned something new, had we driven into Atlanta, I did have a sandwich that I’d never ordered before, their Chicken Italiano, with hot sliced chicken breast, peppers and onions smothered in marinara. Admittedly, it was pretty tasty, but I honestly would have been happier with a great big Italian sub with all that shredded lettuce. I love those things.

We did some grocery shopping, and rented The Avengers from the Redbox, and kicked around lazily while the baby napped. Eventually, my daughter came home and got ready for a Halloween party. When we started getting hungry hours later, we decided to stick with tried-and-true favorites and went into the city for Bell Street Burritos. We absolutely love this place, of course, and enjoy any opportunity to share a meal here together. That we did so on Halloween weekend and got to see so many people in silly costumes as we ate was a bonus. My favorite thing here is a chicken burrito without rice, adding green chiles and red sauce.

After that, Marie had her dessert from the Jake’s Ice Cream next door – a blackberry sorbet – but mine was a few miles back up the road. First, we had to drive slowly around the Old Fourth Ward listening to the radio, so I could hoot and holler and make a big ruckus as the Dawgs beat Florida – I’d rather not do all that yelling on the interstate at highway speed – but then we got on the road and back to Howell Mill, because on our way down to Irwin Street, we passed by the Food Truck Park and saw the Fry Guy parked there. 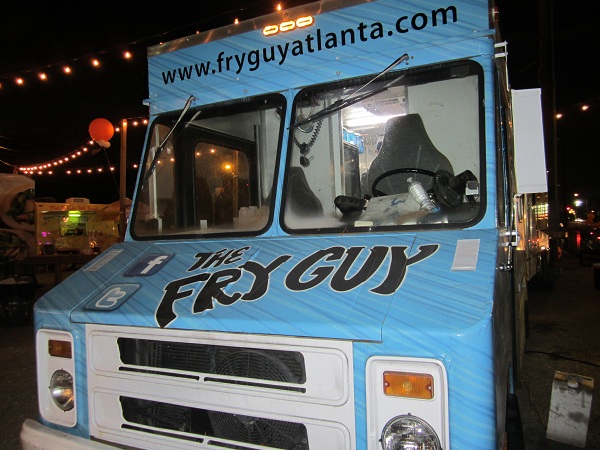 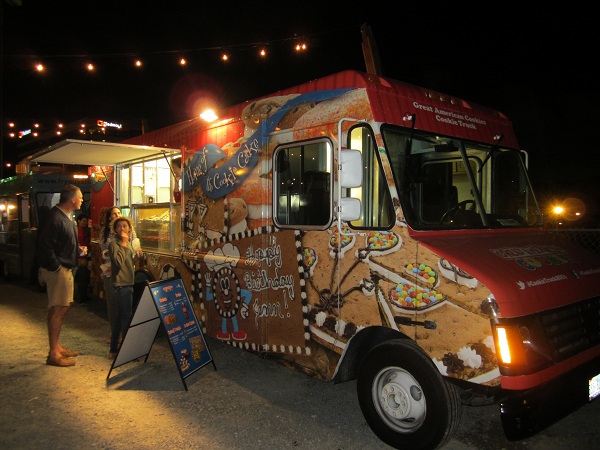 This is one of the trucks that I’d been hoping to stumble across. They do Belgian-styled fries, either in a simple cone with a side of sauce, or snazzied up with truffle oil and parmesan cheese, or with lots of chili and toppings. I bought a cone and got some curry ketchup. This was the first time we’d come by after sundown. The park didn’t have very many trucks left this late, and there weren’t many people, and it was a little cold and windy – this was the weekend when Superstorm Sandy was not long from landfall, its pressure systems mildly affecting us all the way down here – but it was the end of a very relaxing day with a fun baby, two good meals, a good movie, a big Bulldogs win and each other. The fries were pretty good, and we got some cookies from the Great American Cookies truck, and after I picked up the girlchild from her Halloween party, we slept wonderfully.