Sometimes, it’s just not very easy to please everybody. Take neighborhood pizza, for instance. As far as I’m concerned, if we want a pizza and we don’t feel like driving any distance, then I’ll probably just pick one up from La Bella’s. I no longer remember what brought us to that place, just that we gave it a try, and I was taken, and it became our family’s neighborhood spot. We do not get pizza with any frequency, but when we do, it is typically La Bella’s.

A couple of weeks ago, the ladies in my life rebelled.

La Bella’s had actually replaced another little takeout joint in our neighborhood, G’Angelo’s, in my affections. I ordered from them fairly regularly for about five years. Then we discovered La Bella’s. Then we stopped doing anything regularly and started blogging instead. Last summer, we had La Bella’s for the first time in a good eighteen months, and probably got a pie from there maybe three times since.

Marie had already decided to order a pizza for a Sunday night supper rather than cook, and I figured that I would swing by La Bella’s on the way home from work. I was surprised when she told me to go to G’Angelo’s instead, but she was the one buying. 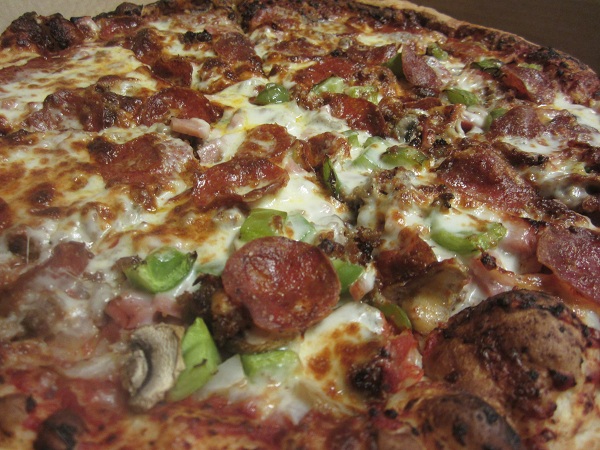 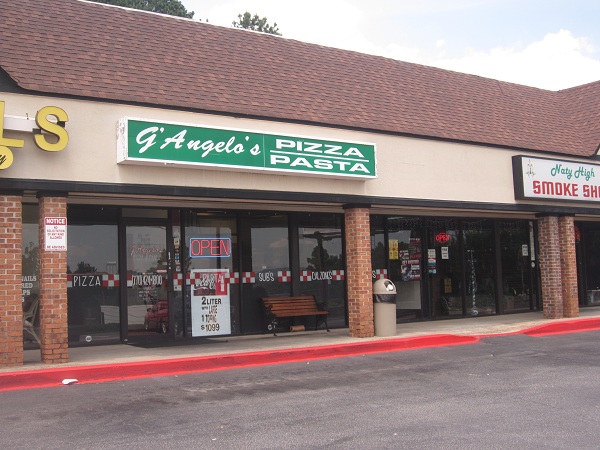 I must stress that G’Angelo’s has never done anything wrong, and nothing to lose my loyalty; I merely found someplace that I like better, someplace that is eight minutes away rather than six. But La Bella’s has done something minor and miniscule to make the women exercise their prerogatives, as they may. I have no idea what La Bella’s is meant to have done. I doubt they’ll ever make it clear.

The two restaurants are quite similar. They are principally carry-out joints, although G’Angelo’s does have a few drivers to make deliveries. They’re both always sweltering inside, cramped, no-frills strip mall spaces, the interiors swallowed by an oven and hazy heat. They both do New York-style pies, with concessions to the locals who like to have sixty-eleven toppings on each slice. G’Angelo’s doesn’t sell by the slice, but they do have a 12-inch cheese pie for just $5.99 if you pick it up.

Marie got the pie as loaded as she likes, with all the traditional toppings. She denied me anchovies. She was in charge and could do that. They didn’t scrimp on the onions. They baked it just perfectly. I had no complaints. It’s her prerogative to change things up, and we’re lucky to have a place as good as G’Angelo’s nearby to take care of things when she does.

One thought on “G’Angelo’s Pizza and Pasta, Marietta GA”