Regular readers might have noticed that over the last month or so, I’ve been sampling all the barbecue joints around Atlanta’s Buckhead neighborhood that we have never featured before. Last of these is the second home for The Greater Good, whose first store, in Tucker, opened in 2012.

This location opened about eighteen months later. It’s in the former home of Ringside Franks & Shakes, such a good hot dog place, and, as lovers of “not fooling anybody” architecture will spot in the photo below, the building was originally erected in the early 1970s as one of those mission-style Taco Bells. This is so far north in Buckhead as to almost be in Sandy Springs.

Mike Nelson and Clay Harper own Greater Good as well as the popular local chains Fellini’s Pizza and La Fonda Cantina. This is the third concept that they have tried out in this space – apart from Ringside, a frozen yogurt place called, oddly, Three on the Tree, also failed here – and I guess that they got all the kinks worked out at their much larger Tucker store before moving ITP. Meats are smoked in an upright steel smoker in a small room on the back of the building. 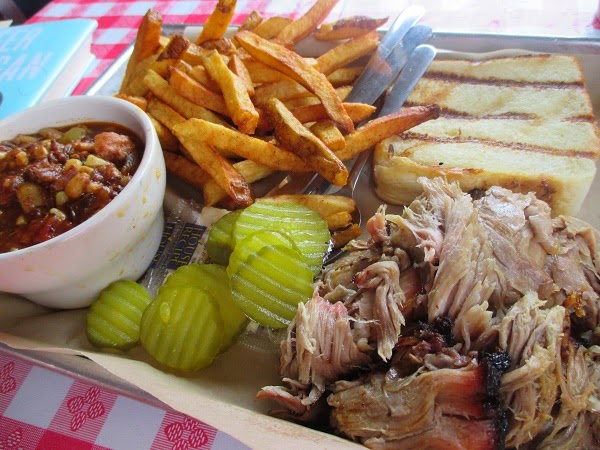 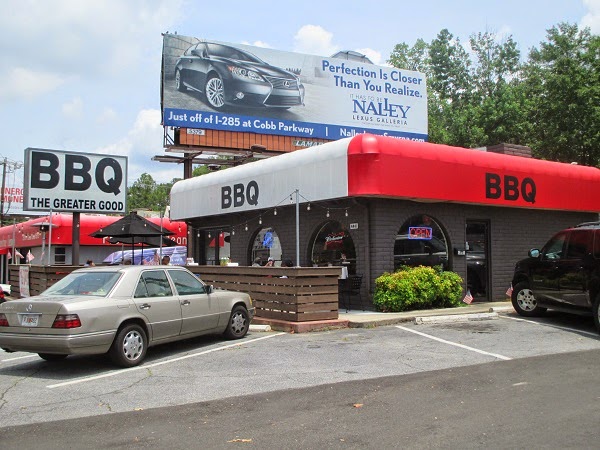 I think that the practice that they’ve had in Tucker has improved their product a good deal. I noted that the pulled pork out there was perfectly good, if not worth a drive across town, but this was noticeably better, and incredibly filling. The pork was smoky and moist, and I enjoyed it better than quite a few of their peers in the Atlanta area. The sauces include a peppery brown “house,” along with a brown sweet, red hot, and brown “Carolina” mustard.

The pickles were good and the house-cut fries were terrific. Sadly, though, as good as the pork was, I was really displeased by the Brunswick stew. It’s become disagreeably common for places in and around Atlanta to charge an extra dollar for stew, calling it a “premium” side. I’ll note that, after visiting more than 280 barbecue restaurants around the southeast in the last five years, Atlanta is the only place that I have seen this. No other municipality does this, and while I’ll grant that the business is tough, and that rents and other costs in the city are higher, it’s every bit as stupid, ridiculous, and transparent a practice as, say, Albany and only Albany charging a premium for black-eyed peas. Still, we swallow the dollar with a raised eyebrow.

But this was the first time that I’ve ever paid that extra dollar for stew and found it full of potatoes. Full of potatoes. I mean, at least a third of this bowl was potatoes. You’ve got to be kidding me, Mike and Clay. Potatoes are a cheap extender. They’re what some restaurants out of town stick into their stew in place of some of the meat to keep their costs lower, a practice with the same goal of stretching their dollar. To be sure, you can still make pretty good stew with potatoes – just ask Fox Bros., who might make the best stew in town – but they don’t use this many. I’ve never before found a place that was willing to both stretch the dollar with extenders and charge guests the extra buck.

Still, the pork was good enough to make me want to overlook it. Reports are that the ribs are amazing, and I definitely plan to return sometime to try those. The side business may aggravate me, but what they’re doing is otherwise so good that I look forward to forgetting about it as quickly as possible.

Other blog posts about The Greater Good: