Not long after moving to Starkville, Mississippi, my brother-in-law Karl joined the local chapter of a fraternal organization. On our first evening there, we got to meet some of his friends from that group when we went to their usual Thursday evening post-meeting dinner retreat, the Central Station Grill. This is one of the city’s nicer, in the “clean and upscale” department, restaurants, the sort of place that most undergraduates at Mississippi State probably “take” their parents for a nice dinner in the hopes that Dad’ll get the tab. The food here was pretty good, but my children had better not try that scam with me. Wherever they go to college, and I hope that they will go far away and cultivate memories unencumbered by my own, they should know to “take” me to someplace with a lot more soul than this.

Having the brief opportunity to chat with older, local men, I asked them about local specialties. Like a lot of us in this hobby, I’ve been reading the work of John T. Edge, a Georgia boy who apparently holds the position of Professor Emeritus of Eating Real Good at Ole Miss, up in Oxford. Adhering to the “publish or perish” rule, Edge has written several extremely good books, including the downright indispensable Southern Belly, and co-ordinates The Southern Foodways Alliance, which I heartily encourage all of my readers to explore in depth. It’s certainly raised Ole Miss a rung or two in my estimation; enough that, when my daughter and I were in a Mississippi State college gear store, I just had to tut-tut when I saw Ole Miss labeled as “The Ugly” alongside Bama’s “The Bad.” I wonder what Starkville has contributed to our love and understanding of food in half the time that Oxford has.

So, anyway, I’ve been reading Edge’s books and the fascinating oral histories on the SFA site, and had in mind, while I was in Mississippi, to track down some local specialties. I had a particular desire to try some slug burgers and some hot tamales. Unfortunately, Starkville is in entirely the wrong place, according to Karl’s friends, to sample either. In one case, they would be proved wrong, as we’ll see below. The older gentlemen had a lot to share, about the Slug Burger Festival up in Corinth, and how one of their number could probably cook up a pretty good batch of tamales himself, but any in the region were probably trucked in from Greenwood, but mainly how if I wanted burgers at all, my best bets locally were either restaurants called Mudbug’s or Grumpy’s, neither of whom could be relied upon to serve slug burgers or dough burgers or even really knockout caliber burgers, period, but they were usually pretty good.

They also had a great anecdote about my brother-in-law being so doped up on dental painkillers once that he forgot where he lived, but that didn’t help much. 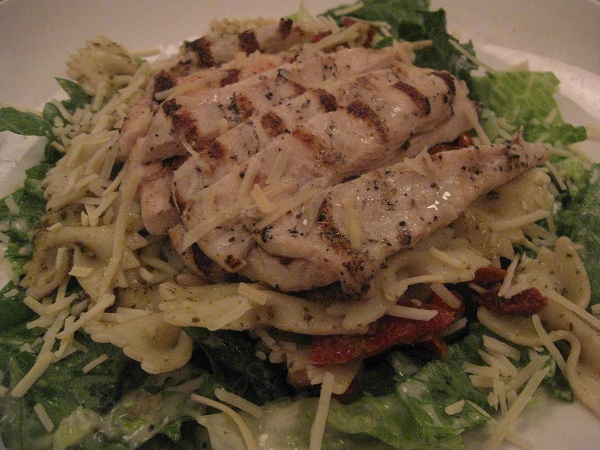 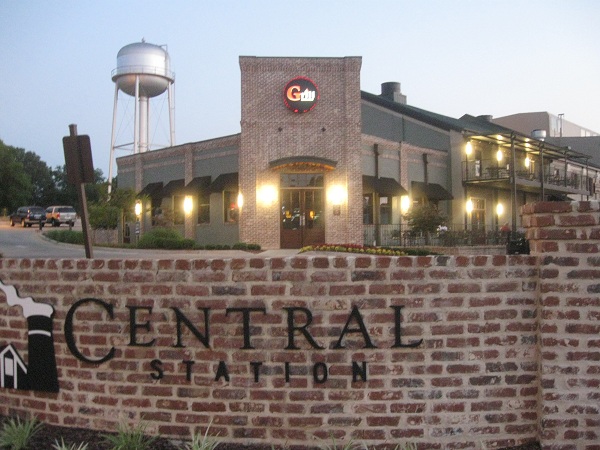 At any rate, the food at the Central Station Grill sort of got dominated by a few minutes’ conversation with strangers, the sort of which I would have loved to continue for much, much longer. It’s a decent enough place for what it is. It’s one of five properties managed by a company called the Eat With Us Group, ranging from high-end dining at Harvey’s, with three locations in Columbus, Starkville and Tupelo, to student-budgeted meals at the Bulldog Deli. Marie had a burger that she said was pretty good, and I had a decent chicken pesto pasta salad along with a cup of tomato florentine soup, which is sort of what you’d get if you served a bowl of spinach ravioli cold, and my daughter had a plate of nachos that she enjoyed. It’s comparable to an Applebee’s, but preferable in that, while visiting Mississippi, you should want your food dollars to pay for a local payroll.

We slept horribly at the hotel, in part because the road trip kept our baby asleep all day and he finally woke around 11 pm and had no intention of going back to bed until he’d told us at very great length how exhausting it was to sleep for an entire day. He was in a little better mood in the morning, when the four of us dragged our carcasses from the hotel room to get something to eat before going over to Karl’s apartment. I read a good thing or two about City Bagel Cafe, so we gave that a try.

I was a little aggravated by the music here. I was, on the one hand, very pleased that they were playing Mississippi State’s student station, WMSV. On the other hand, 91.1 apparently programs any given hour by looking at an Atlanta 99x playlist from 1994. The Bodeans were playing when we walked in, and that “Tell me all your thoughts on God” song immediately followed. I was counting the seconds until we heard “Breakfast at Tiffany’s” by Deep Blue Something. 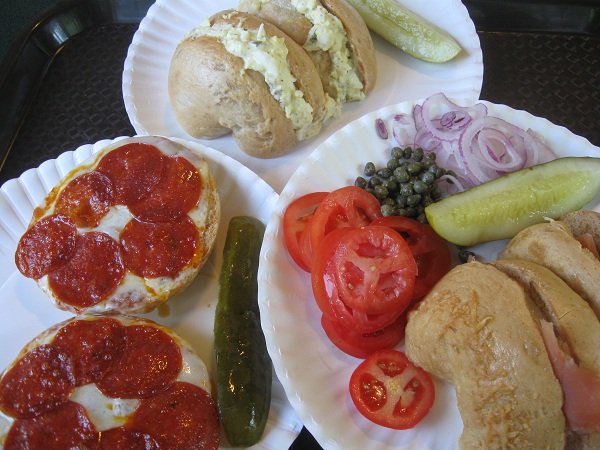 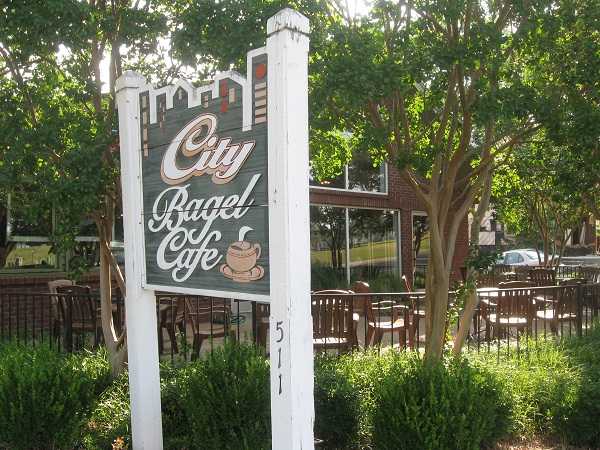 We each had bagels here, although mine was a second choice. I usually wait until Marie orders before placing mine, but, indecisive in the face of such a large chalkboard menu, she asked me to go ahead. My daughter had already asked for a pizza bagel which she ended up liking a lot. I asked for egg salad, and Marie said “Oooh! That sounds great! I want one of those, too.”

“Then change mine to cream cheese and lox with tomatoes, capers and red onions,” I said, knowing that Marie knows very well that I would cave, wanting different things, and be satisfied with a couple of bites of her egg salad. This worked out all right; my salmon and veggies turned out to be much tastier than her bagel.

This is a really good student spot, with lots of coffees and smoothies and fresh-squeezed orangeades, several tables and magazines. It gets pretty loud during peak times. Running a little early the next day (Saturday), my daughter and I popped in again and found it every bit as noisy and full of life. This is a good place, though heaven knows how any of these students get any work done.

They’re certainly not working when they are visiting Grumpy’s, which is on MS-182 (the old part of US-82). This is a very student-oriented bar and grill with a big backyard to book live bands to play while students enjoy drink specials and burgers. 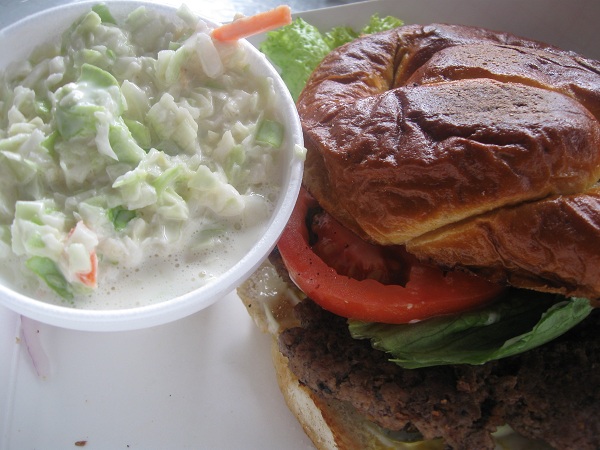 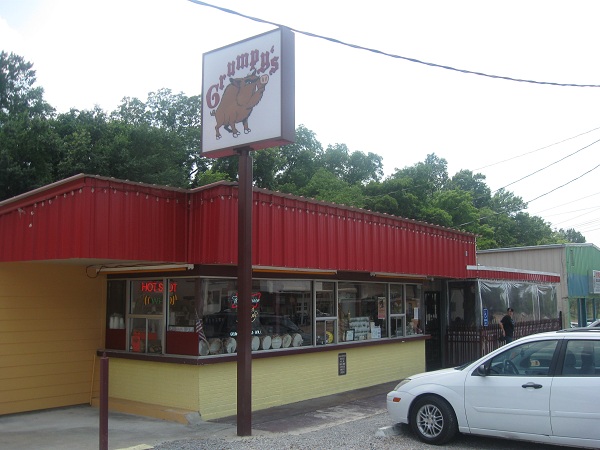 I imagine that most college towns have a place like Grumpy’s. It reminds me very much of the Loco’s on Baxter Hill in Athens. You can get a pretty good burger there, too. Grumpy’s has an enclosed patio with an air conditioning unit about the size of your car keeping it cool and a super-sized screen on the side of a building behind it showing ESPN. We watched the Mississippi State baseball team finished getting manhandled by Florida while enjoying some good food. Unsurprisingly, all the entrees have cute names. I had the basic burger, served on a swirly bun that allowed mayo to escape onto my hands, which is called a Starkville City Jail. I wondered whether this town will still get you / because they have a curfew.

I’ve certainly had worse burgers, and this is a place that I could see myself frequenting if I were a local, but I was still hoping for something with a more Mississippi flavor. Happily, that came at our next stop, which proved to be one of the best meals we had all weekend. The previous day, when she went to check into our hotel while Karl and I left to go to Memphis, Marie had spotted this little place called Petty’s BBQ on MS-12. This proved to be a damn memorable experience, mostly for the right reasons. 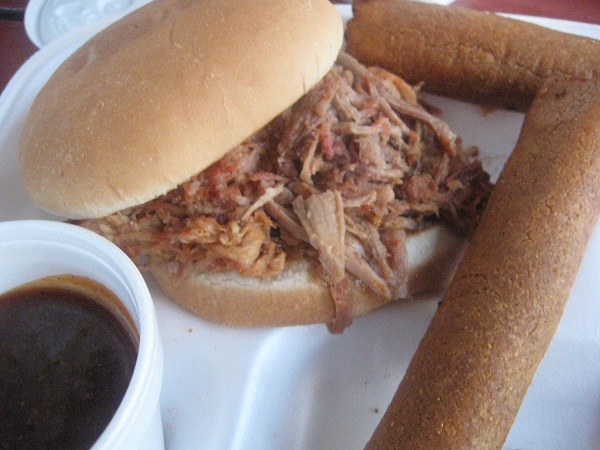 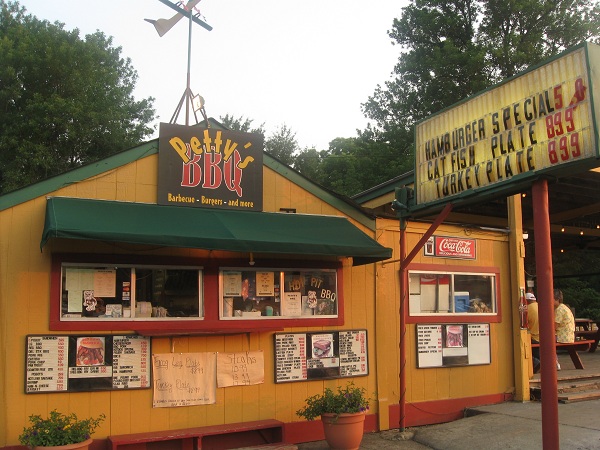 The downside to Petty’s, and it’s a very disagreeable one, is that they really would enjoy nickel-and-diming their guests to death. Somehow, the lady at the window who took our orders did not note that my daughter wanted a cup of ice water. When we returned to the window for it, more than forty dollars poorer, they asked for fifty cents for the cup. When I returned to the window for a refill of sweet tea, they demanded another fifty cents. I have certainly seen people on food-oriented message boards draw lines and refuse to visit restaurants that charge for basic amenities. I’m not certain, but I found that experience so aggravating that I might well join them where this place is concerned.

That’s a shame, because the food is super. My chopped pork sandwich was quite good, and I had the thick, black, sweet sauce on the side, but the real winners were the two hot tamales that I ordered with them. Tight and packed densely with spicy pork, these were every bit as good as I had hoped, and I was so pleasantly surprised to try them, since the gentlemen I had spoken with the night before did not know about Petty’s. They were not at all what I expected, however. I’ve seen photos of tamales, and enjoyed them at a Mississippi transplant’s short-lived restaurant in Austell, Georgia, that were made from corn husks. These were made from corn tortillas. I was satisfied, but obviously the next time we come to Mississippi, I’m going to have to leave Marie and the baby in Starkville to play games with her family while I go northwest up to the Delta region and try lots more than just this.

I was the only one of our group who dug into the chopped pork, but that was okay, because this place fries up everything and does it well. Marie and her brother each had pan trout, absolutely delicious with wonderful sides, and while we all passed on the frog legs – oh, I wanted to, but the thought of all those little frogs on crutches, you understand – we were very taken with the excellent fried pickles and especially the fried green tomatoes. It’s all very good food, and I sure was pleased to get to try some Mississippi tamales.

I was entering a food coma over the scope of supper, but I somehow managed to direct the car back up the road to Bop’s for us to get dessert. Bop’s is a small chain of frozen custard stands that operates twelve stores in Mississippi and one in Louisiana. The first one opened in Jackson in 2000. They specialize in “concretes,” sundaes mixed so thickly that you can turn the cup upside down and not lose the contents. I had a vanilla shake, and it was not at all bad. 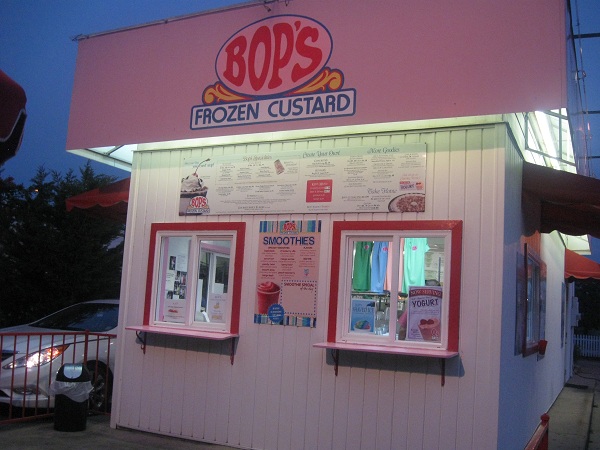 I’d like to think that we ate pretty well in Starkville, but we were not done yet! We had more eating to do on Saturday, and a campus to visit. Give me a couple of days to write that up and I’ll tell you about it next week sometime.

2 thoughts on “Starkville, Mississippi – part one”