Here’s a restaurant that I genuinely waited a year to enjoy. When Marie and I went to Memphis to visit her younger sister in June of 2010 – “Never again visit Memphis in June,” I told myself, “because it’s too darn hot.” Shows how I listen. – Anne suggested that we eat at The Bar-B-Q Shop. She and her boyfriend and her housemates all agree that this is the best of Memphis’s many amazing barbecue restaurants. Unfortunately, we had Sunday free for eating out, and this is one of those aggravating places that closes on Sunday. We ended up at Jim Neely’s Interstate instead, and I had no complaints.

As we put together plans to take our new baby over to visit Marie’s brother and sister, Karl mentioned that he could drive up and collect Anne. “Wait until we get to Starkville and I’ll ride to Memphis with you,” I said. I ended up doing the driving, across US 82 to Winona and north up I-55, and didn’t mind at all. Karl has a smooth ride that probably doesn’t rattle audibly until the other side of 120 mph, and I kind of liked being in control of when I was going to get some of that barbecue. So, after a good few minutes of baby-hugging and play, Marie and the baby and our daughter enjoyed the air conditioning in Starkville while we got back on the road for the six and a half-hour round trip. 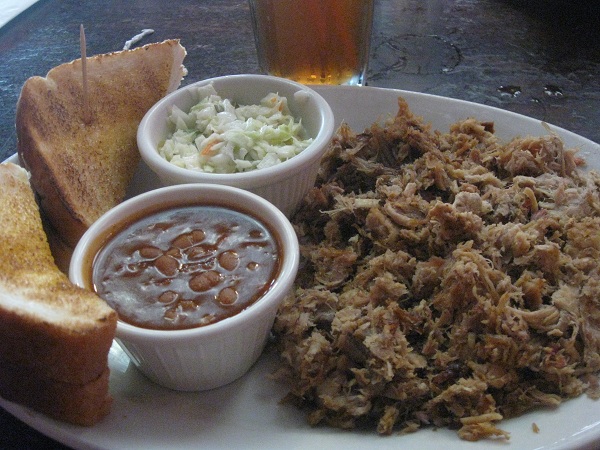 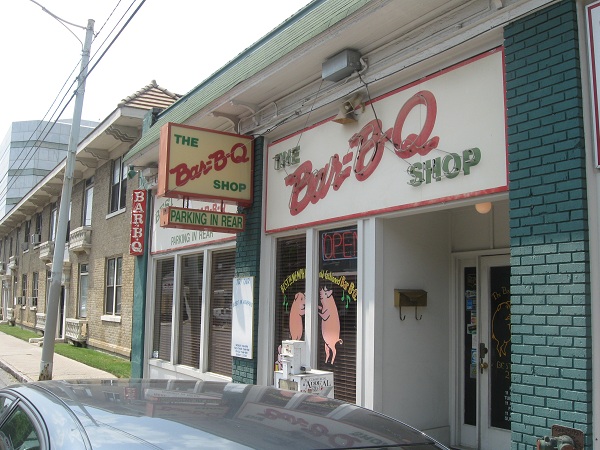 My goodness, friends. This place was worth the wait. I may claim to prefer Carolina-style barbecue, but the two places that I have tried in Memphis have been just spectacular. This place absolutely lives up to its reputation. The sadly-still-on-hiatus 3rd Degree Berns gave the Bar-B-Q Shop his highest award, one of only five restaurants to make that grade, and he’s in good company. I’m not certain when this place opened, but it has become one of the city’s best-known and best-loved barbecue temples.

I had a pulled pork plate with beans and slaw and it was absolutely everything I could have hoped for. I remembered to order my meat dry, and I’m very glad that I did, because the Memphis way is to absolutely drown everything in sauce. The only disappointment was the mild sauce, which was sweet but very tame. The restaurant and its competition team bottles this sauce and sells it in grocery stores under the label “Dancing Pigs” and it’s not so different from anything that Kraft bottles. The hotter sauce has much more character and bite. I understand that the usual Memphis way to enjoy pulled pork is on a messy sandwich, lost in so much slaw and sauce that you can’t eat it without gloves and a bib, but I’m just fine trying my pork dry, so I can appreciate the perfect mix of smoky and moist that makes for the best barbecue.

The slaw was made with a strong vinegar base and was really terrific. I prefer vinegar slaw to mayo-based, and on a sandwich, mixed with the sweet sauce, I bet this really does blend well together.

The service here was a trip. Our server was a former Atlantan, and you’ve never met such a motormouthed queen in all your days. Hearing where I was from, he told us that he used to know a fellow who worked on the household staff of Zell Miller, back when he was governor and before he lost his marbles, and probably would still be regaling us with tales of political hoedowns and foolishness and shortcuts from one city to another if we hadn’t called time to get back on the road. Marie’s little sister had a new nephew to meet, after all.

Other blog posts about the Bar-B-Q Shop: