So I’ve been talking about our trip into the Deep South and finding some pretty good food along the way. Nothing in Mississippi had really completely knocked me for a loop, but Starkville might just not be the right place in the state. All the evidence points towards the Delta region, or Hattiesburg, being full of interesting places to eat.

But that’s not to say that Starkville is completely without charms. We certainly didn’t have any bad meals here, although the stunning number of crummy national fast food joints on Highway 12 will make anybody slowly shake their head. The first full day was pretty good, but the discoveries of the second day were even better.

For breakfast, Marie and I took the kids to the small downtown area for a meal at Starkville Cafe, which is apparently a fairly old business that had been shuttered for a few years before a reopening in 2008. I am very disappointed in myself for not sampling the owner’s homemade syrup, which he calls duck butter and comes with an order of waffles, but I really was not in the mood for waffles, and just wanted some biscuits and gravy. It had been a while since I’d indulged. 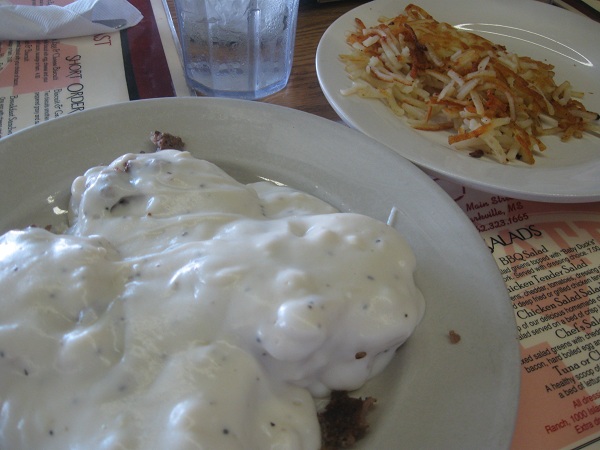 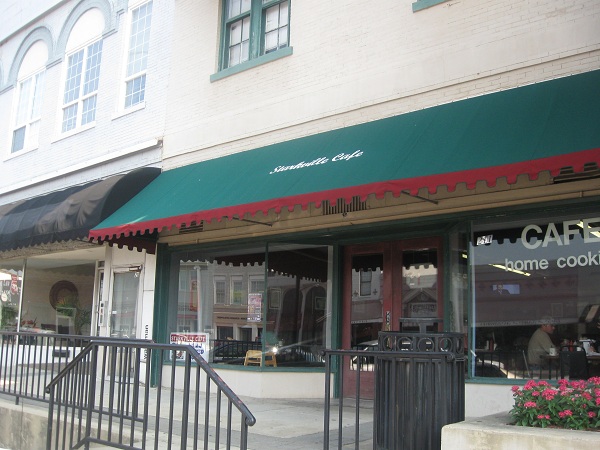 Nothing about Starkville Cafe really shines as truly remarkable, but it’s a very good place for a proper southern breakfast, probably not bettered in the area, with a regular clientele and awesome service. When I asked about the restaurant’s history, our server told us a little and directed us to the second dining room, to see a few quite old framed photos of Starkville’s downtown over the years. These, most dating from the days that Mississippi State University was still a college, were pretty fascinating, and got us ready for the next part of our morning. Marie dropped my daughter and me off on campus, near the stadium, and she and the baby went to go play board games with her brother and sister. The girlchild and I had some exploring to do.

Mississippi State is one of the smaller SEC schools, but it still has a fine stadium and some wonderful old buildings and trees. Actually, they don’t have nearly enough trees on this campus. My daughter and I spent the better part of four hours walking around and sweating and wearing out the right side of my right shoe and while I’m glad for the exercise, I was more glad for those occasional moments where we took a break and sat in the shade. This was an orientation morning for dozens of incoming families, and I reflected, sadly, how soon it will be before my older son takes off for school, and how very badly I am prepared, emotionally or financially, for that day.

For lunch, we walked back up University Boulevard and met my wife and her siblings at The Little Dooey, which is arguably the city’s most well-known restaurant for out-of-towners to try. This excellent barbecue shack proved to be the eatin’ high point of our time in Mississippi. It was recommended, as many good restaurants are, by an acquaintance on the Roadfood.com message boards, Littleman. I think I asked him for a suggestion about a year ago, because that’s about how long I’ve been penciling in a trip to Starkville to visit with Marie’s brother. 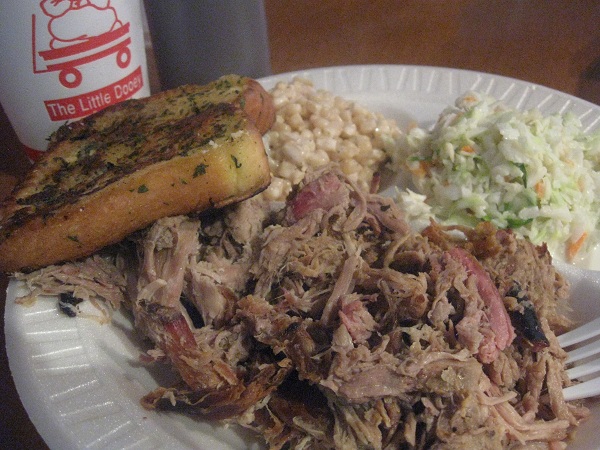 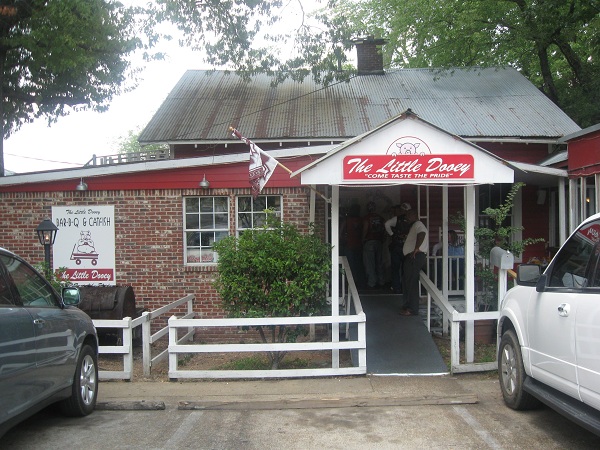 I thought this place was just terrific. It gets a good crowd of travelers, including a small mob of older bikers who roared in just ahead of us. Dimly lit and cozy, it’s a very relaxed and laid-back place, and they serve up some fantastic chopped pork. I thought the meat tasted even better than the good stuff at Petty’s the previous evening. There were two sauces, a very disappointing and incredibly sweet mild sauce – “You’ll like this,” I teased Marie. “It’s from Hershey.” – and a much tastier hot sauce with good bite.

The sides were also really terrific. I was especially taken with the corn salad, which was in a light seasoned dressing with tomatoes and peppers and reminded me of the corn that I really miss since Dusty’s BBQ here in Atlanta closed. Somehow, my daughter got an extra helping of it instead of the corn on the cob that she ordered. The server was good enough to bring her a replacement cob and I helped myself to more of the corn salad since my daughter, madly, didn’t enjoy it.

By this point, the temperature, as displayed by the signs in front of banks around town, had peaked at 104. It seemed like a perfectly good time for my daughter and I to duck into a movie theater and enjoy some air conditioning for hours, while the others resumed their board games. We should have seen two movies instead of just one. Not very long after we emerged, talk turned to supper, and it was eventually decided, after they played several more games, that we should go to a Cajun-themed sandwich place called Oby’s. 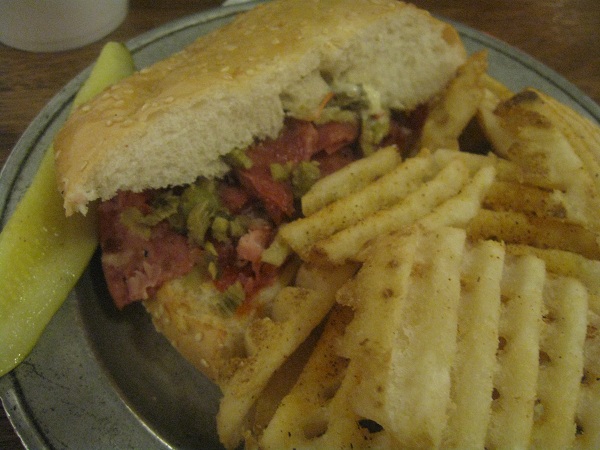 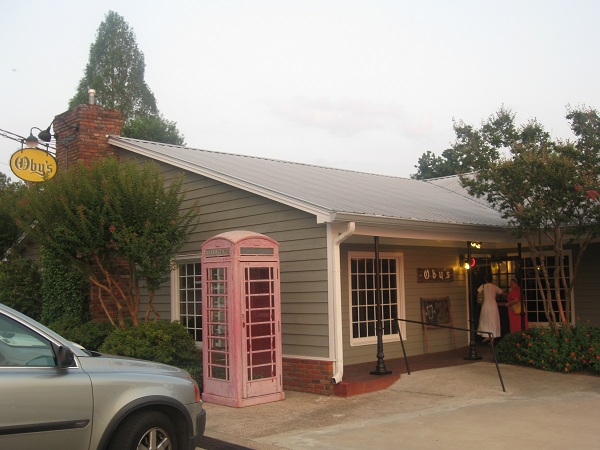 I really enjoyed Oby’s, too. Sure, given the right meats it is difficult to mess up a sandwich, but the half-muffuletta here, priced extremely nicely at under six bucks, was as good as any I’d had at Logan Farms, and the side cup of jambalaya was completely wonderful. Karl had a big plate of red beans and rice, and Marie and Anne both enjoyed the Cajun-spiced roast beef.

Oby’s was the closest place to a drive out in the country that we made from Starkville. If you can imagine the university as a big block on the east side of town, with a stretch of student-priced housing and similarly-oriented retail and restaurants stretching west towards downtown, then the whole shebang is effectively bordered, or scissored, by “Old 82,” which is rather rundown and weathered on the north side and by MS-12, the commercial artery with the larger grocery stores and fast food on the south side. There are reasonably nice neighborhoods and schools below this artery, and Oby’s is down this way. In a community as small as Starkville, driving from the west edge of town down here feels like really getting out of the way, but at home, we seem to drive at least this far just to get to the interstate. It does make me feel like the next time we come to Mississippi, at some point we need to leave Marie and the baby behind for gaming and I’ll take whatever other kids are with me and get out exploring.

Having said that, though, just exploring the campus in that heat in the morning utterly did me in and caught up with me hard. After supper, I laid down at Karl’s place for a quick nap. Marie kicked back to rock the baby to sleep and pretty soon we were both passed out, feeling our age and, in my case, looking it, while everybody else played games and let the fogeys sleep. My daughter reported that she battled her way to an unlikely one-turn win in some card game or other. 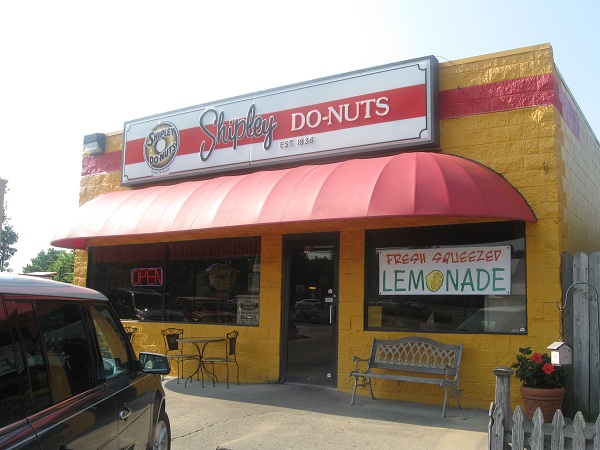 In all, this was a pleasant getaway. It was awfully hot and a little more limiting than I was anticipating, but we know better for our next trip what to expect and what we might do. I definitely want to return to the Little Dooey, but I also want to drive around a bit more, and visit Columbus, Brooksville or West Point, and see what they might have to offer.

Before we left town in the morning, we stopped at the local Shipley Do-Nuts, right across from the hotel, for a quick little breakfast. I’ve noticed stores from this chain in Nashville a time or two, and I suppose it’s sort of the regional equivalent of Dunkin. Given a blind taste test between either store’s chocolate frosted, I couldn’t tell them apart. Just as well I like Dunkin, really! I had a chocolate frosted doughnut; I do like chocolate, I just like it best on a doughnut.

The road trip back would prove to be considerably longer than the trip there, as we had six planned stops to make. More on that in the next chapter.