My dad never went to Tuscaloosa. I always thought that was weird.

When he was younger, he saw his beloved Crimson Tide play many times at Legion Field in Birmingham, and, once he and my mom moved to Atlanta, back when Georgia Tech was in the sort of proto-SEC, he’d see the Tide play in Atlanta at Grant Field. Yet he never saw the Tide at what is today Bryant-Denny Stadium, which is briefly visible, towering over the trees, as you make your way down Tuscaloosa’s main commercial strip, McFarland Boulevard. At least, I think that was the stadium. I’ll feel a bit silly if it wasn’t.

You might have seen the images of devastation from the tornado that leveled a chunk of McFarland in late April. Seeing it first-hand, all the businesses at this one crowded intersection turned into matchsticks, chalk dust and giant, mangled letters that once formed signs, was shocking. Looks like it came about twelve feet from knocking down a hospital. Better the Hobby Lobby than that.

A big part of me wanted to swing by Bama’s campus on our way back through Tuscaloosa, but I had too hard a time thinking of Dad to manage it. Just being in that town at all, making our way to the legendary Dreamland BBQ, was rough, and I got choked up at one point, missing Dad. He loved Bama so much that being in that town, with crimson everywhere you looked, was a little overpowering.

I knew that it would be; that’s why I wore a UGA shirt. 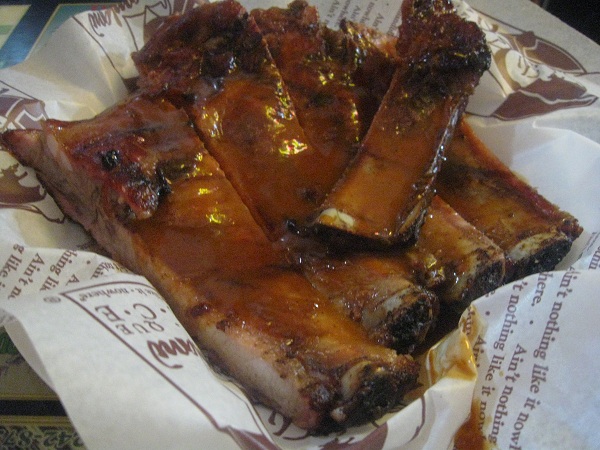 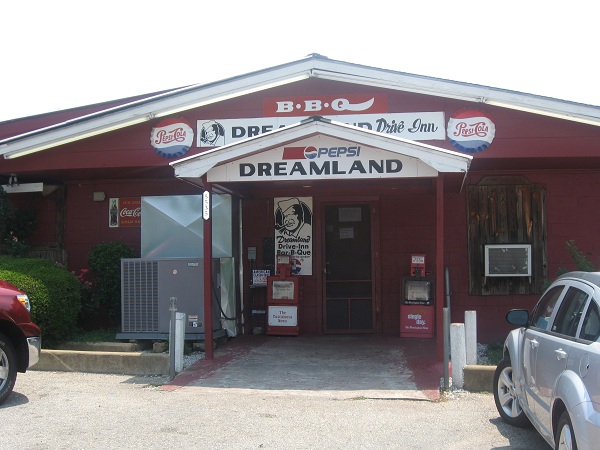 Dad never came to Dreamland, not even once the owner agreed to a chain of franchises with expanded menus. One opened in Roswell about a decade ago, and instantly brought in dozens of the region’s Tide faithful to watch Bama sports on TV. I couldn’t even get Dad to come watch a game with me there; he had long passed the point where he just wanted to watch his games on his TV, in his house, where he could yell and whistle all he wanted. I tried telling him he could do all that in the restaurant, too, but he liked to be home, and he liked to be in charge.

The Dreamland franchises are really not much like the original store, which is very near McFarland, but tucked away next door to a small church and catty-cornered to a mobile home and a field of kudzu. The original is absolutely a barbecue temple where the faithful make pilgrimages. When we left, out-of-state license plates outnumbered local ones by 3-to-1. The franchise stores serve up a full menu of chopped pork and every possible trimming, but the original just serves ribs, bread, sauce, banana pudding, slaw and beans. That’s it. You don’t come here unless you’re ready to dig into some ribs.

Marie likes this place more than I do. Don’t get me wrong; it is a treat, dark, loud and full of bric-a-brac and celebrity autographs, and the ribs are excellent, but Marie just likes ribs more than most people do. She does not order them often. She’s just genteel enough to grin and say that she feels like a barbarian gnawing down on them. The ribs are indeed excellent, but honestly, I could eat all day on white bread and their unusually spicy orange sauce. I heard an informed guess once – from a native Alabaman who co-owns a barbecue restaurant in town – that the secret ingredient in Dreamland’s sauce is turnip greens. This is not listed among the ingredients on the label of the take-home quart, but I choose to believe it anyway.

We keep a quart of this sauce in the fridge; I find that it goes well with damn near any meat. Shortly after the baby was born, Marie’s mother came to stay with us and cook for a spell. She makes some really excellent meatballs that are meant to be eaten with spicy mustard. Marie’s mother is far too polite to say anything about it, but I could see the look of sheer horror in her eyes when my daughter and I spooned a good quantity of Dreamland sauce all over her meatballs. I’ll tell you the truth, though: it made excellent meatballs even better.

Marie had the lion’s share of the ribs that we ordered, in part because, perhaps with the stubbornness of a heretic, I had something to eat on the way over. We learned as we drove through Tuscaloosa on our way to Mississippi that the city is home to a small chain of Mexican fast food joints called Taco Casa. There are seven dotted around the town. Y’all know me and teeny little fast food chains, and I just had to check this out. 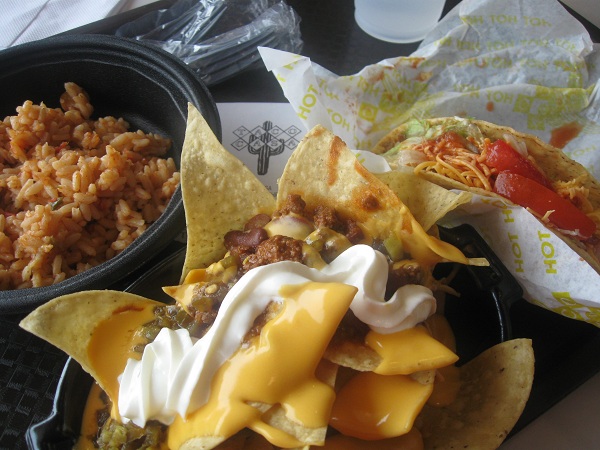 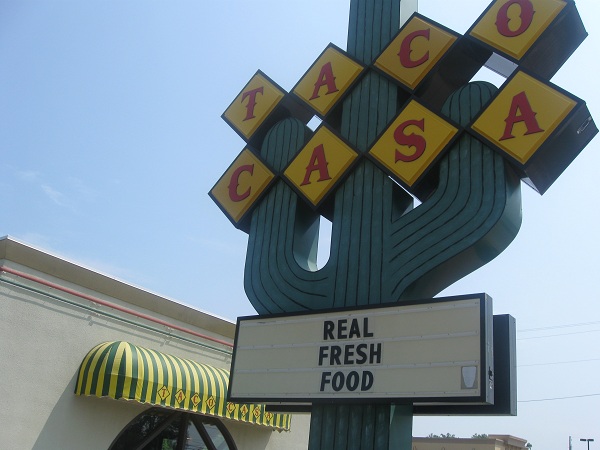 Look at that sign! I understand that my fascination with small-market chains is not universal, but you must admit, that is one fantastic fast food sign.

Taco Casa started up in 1974, serving the same sort of menu as Del Taco and Taco Bell. It’s very much the same sort of food, not quite as good as Del Taco and a million times better than the Bell. Del Taco, you understand, is my absolute favorite fast food not available near me, although we are hearing serious scuttlebutt about a store opening in the suburb of Snellville later in 2011. “Not quite as good as Del Taco,” is, from my mouth, pretty serious praise.

I did spot something interesting on the menu. In Athens, there’s a not-miles-removed little chain of places called The Taco Stand. Some years ago, they upgraded and corporatized their menu and removed an item called a sancho, which was basically a deluxe burrito without sour cream. I have never seen sanchos on anybody else’s menu until we stopped here. I wonder whether the Stand didn’t pilfer the idea from Taco Casa.

I think it is important to note when you get really great service at a restaurant, particularly a fast food place that doesn’t necessarily employ the best and brightest. I wanted to double-check directions to Dreamland from the kids behind the counter, especially since I lost track of how many of the seventysomething miles along US-82 we’d already driven. These guys were so unbelievably nice and helpful that Google should employ them. They told me every landmark to look for along the way, yet I’m not entirely sure they understood why in the world I was wasting time on a little dinky fast food place like them when I could be stuffing my gullet with ribs.

My heresy continues. As we returned to I-20, I was still licking my lips with the spicy tang of the Dreamland sauce. In time, the taste faded. Half an hour east of Tuscaloosa, I started tasting the delightfully spicy ground beef of Taco Casa. I fought the temptation to turn around. It was not easy.

Other blog posts about Dreamland: