A couple of weeks ago, I mentioned that Marie and I had been very impressed with Moe’s Original, a barbecue chain out of Colorado that traces its origins back to Tuscaloosa. There’s another barbecue chain from that city with a foothold in Atlanta. It’s Dreamland, and while Moe’s Original is mostly an unknown quantity, you get talking with barbecue lovers in this or any town and when Dreamland comes up, more often than not, you’ll see a shaking of the head and a furrowed brow. Dreamland, to hear people tell it, is where chain barbecue just went wrong.

Having said that, the original Dreamland, which we visited in the summer of 2011, doesn’t escape entirely unscathed among barbecue lovers either. We certainly enjoyed our trip, but an objective look at other barbecue bloggers and roadfooders (and their commenters!) sees a lot of disagreement. There’s no consensus like some of the southeast’s other legendary temples of smoked meat, but plenty of writers arguing that the shack’s best days are long behind it, its reputation inflated by tourists who, if they drove that far, should’ve just gone a little further up the road to Archibald’s.

And the chain version? Don’t even. The original is at least renowned for its no-frills menu of ribs and bread. The chain locations – a second store in Tuscaloosa, single outlets in Birmingham, Huntsville, Mobile, and Montgomery, and two stores in the northern Atlanta suburbs – are full-service sports bars with great big menus. Their reputation precedes them; the curious would rather drive past all seven to sample the original.

Heaven knows that’s what we did. In fact, more than a decade ago, I ate at the Roswell Dreamland and found it expensive and not all that great. I just put it out of my mind entirely. Back in January of this year, I thought about the local stores for the first time in forever when the Norcross location was destroyed in a fire. It is still closed, although the corporate owners have promised to rebuild somewhere else in that community. The Roswell store – I’m not certain, but I think that it opened in 2001 in a former Western Sizzlin’ building* – bubbled up on my “maybe” list when I started hopping up to that town to shop for beer at Ale Yeah! and I finally decided to take the kids and see whether it actually earned its low reputation among barbecue snobs, or whether everybody was just dismissing it unfairly. 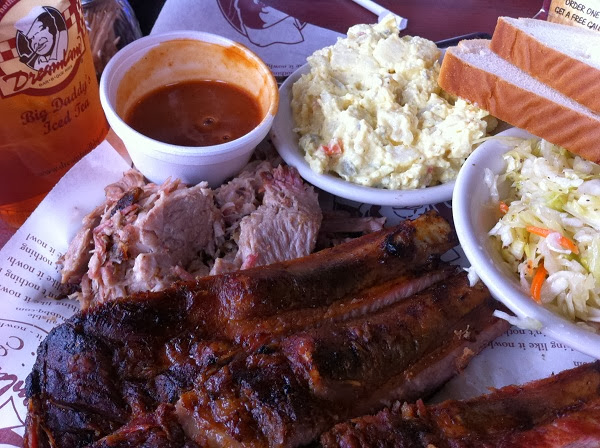 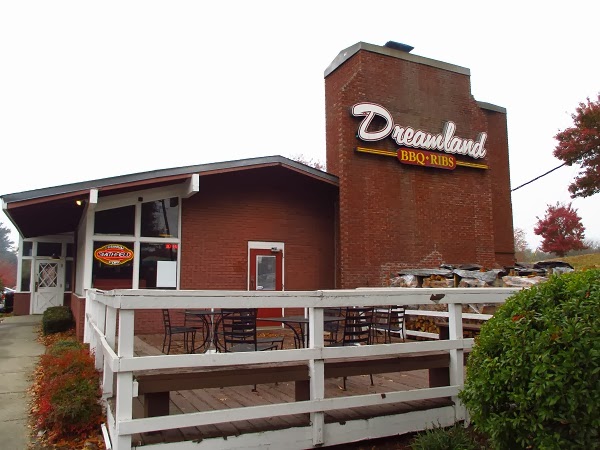 My daughter and I dug in to some chopped pork and ribs and an assortment of sides. In our opinion, the good more than outweighed the bad, but the bad was noticeably so. The chopped pork was completely forgettable, flavorless, limp and requiring a good dose of their excellent sauce to give it any kind of taste. On the other hand, the ribs were better than I was expecting. They were meaty and smoky, a little dry perhaps and with a good crust, but very satisfying. The sides that we ordered were all terrific as well. Since I had been very good with my diet over the previous six or seven days, I splurged and had potato salad along with vinegar slaw and I really enjoyed everything except the chopped pork tremendously. I thought that the ribs were great, and my daughter liked them even more than I did, and also did everything shy of licking her bowl of Brunswick stew clean.

The meat is smoked in big brick pits inside the building, and curious diners can have a look at the setup while waiting. They smoke over hickory that comes in weekly on a big truck from Alabama – I don’t know whether it actually does this, but I visualize one truck making the rounds of all seven stores every Monday and Tuesday – and the ribs only go about two hours, the shoulders for six.

Dreamland is really big on catering, we noticed. I understand that they do a good chunk of business setting up at the NASCAR track at Talledega, at Regions Field in Birmingham, and at several football stadiums around Alabama, and we counted six Dreamland vans parked at the Roswell store on our visit. So to be sure, this is pretty corporate, and the closest thing to the feel of an individual and honest down-home experience was the waiting area, with its framed testimonials about the original shack. While Crimson Tide fans flock here on gameday (Dreamland is, after all, from Tuscaloosa), they have enough televisions to accommodate everybody who wants to watch everything and a menu to accommodate anybody who wants to eat anything. So yes, this is a corporate chain with the look and feel of every other corporate chain, but its low reputation among the snobbish and the faithful is not deserved. The ribs are very good, the restaurant is better than most any other barbecue in northern Fulton County, and this is certainly worth an open-minded visit.

Just, you know, after you check out the original. Authenticity, y’all.

*It occurs to me that The Greater Good Barbecue in Tucker also found a home in a Western Sizzlin’. I guess those places are, despite their huge size, pretty good luck for barbecue joints, aren’t they?

Other blog posts about the Atlanta Dreamland locations: