In December of 1989 or possibly 1990, I was told that there was this band that I had to see playing a free show one night on the steps of City Hall in Athens. It was the Labrea Stompers, led by Jim Stacy, and it was unbelievably cold. I saw them a couple of times after that, in more traditional settings, but I’ll always remember that very long, below-freezing walk back to my dorm against a harsh, knock-you-down wind, and also their terrific performance of “You’re a Mean One, Mr. Grinch.” When Dr. Seuss died in 1991, Stacy wrote an obituary for one of the local papers. Class act.

Since then, Stacy’s had an unbelievably neat life, doing everything from working as a tattoo artist to running Atlanta’s Starlight Six Drive-In to performing with the Silver Scream Spook Show and Blast-Off Burlesque to hosting episodes of his show Get Delicious! for Atlanta’s public television station, exploring barbecue and other fine meats. He also likes carnivals and old toys and corn dogs, a lot, and, some years before food trucks took off in Atlanta, he was making occasional appearances selling giant gourmet corn dogs and other carny-styled food from his Pallookaville truck. Emphasis on the “occasional.” I’ve seen lots of food trucks and enjoyed some great meals, but I never saw the Pallookaville truck anywhere. I’ve never seen Bigfoot anywhere either, but I sure have seen a lot of people talk about him. 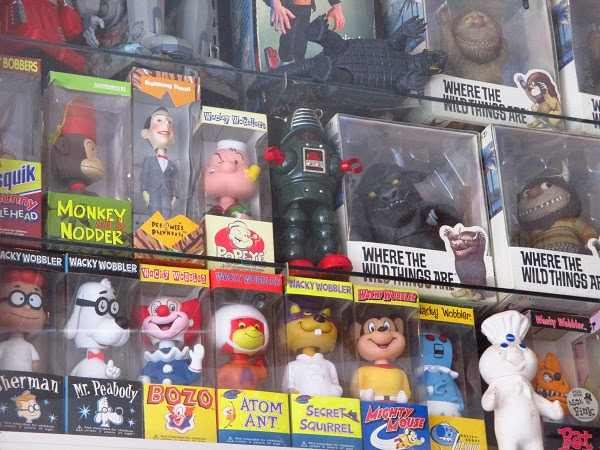 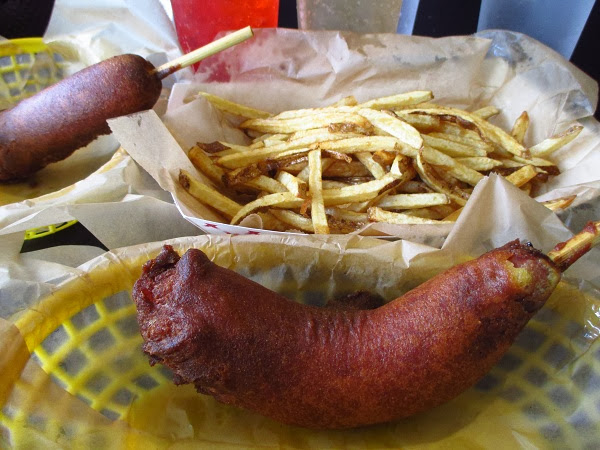 After a long, long time coming, Pallookaville Fine Foods finally opened in its brick-and-mortar home in the strange Tudor-styled village of Avondale Estates on Halloween. From here, Stacy and his excellent crew have put together one of the city’s most unique and gorgeously individual restaurants. Everything from the typography of the menu to the displays of old toys, posters, and autographs from Adam West and Colonel Sanders will let guests know to relax, because this is a labor of love, and not anything corporate.

A single visit won’t do this place justice. The main attraction would be the corn dogs, but the deli sandwiches and the pork burgers sound really promising as well. Unfortunately, the corn dogs are so huge and so filling – yes, this is a very, very odd use of the word “unfortunately” – that there was just no way to sample more than one thing on a visit. I had a corndogski – a Polish kielbasa – as a late lunch about two in the afternoon and Marie had the beef corndogula, and we shared an order of fries. We skipped supper; we were still full. 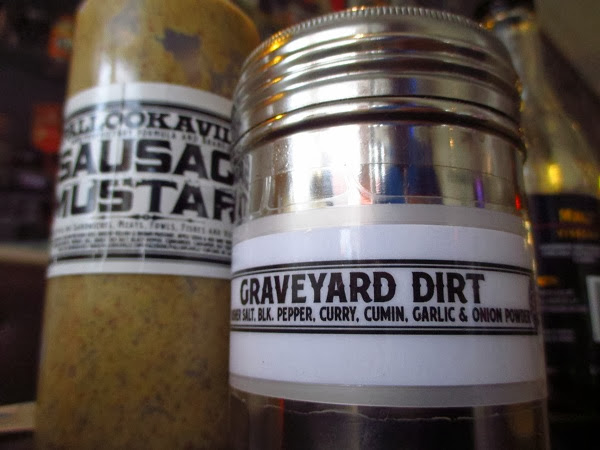 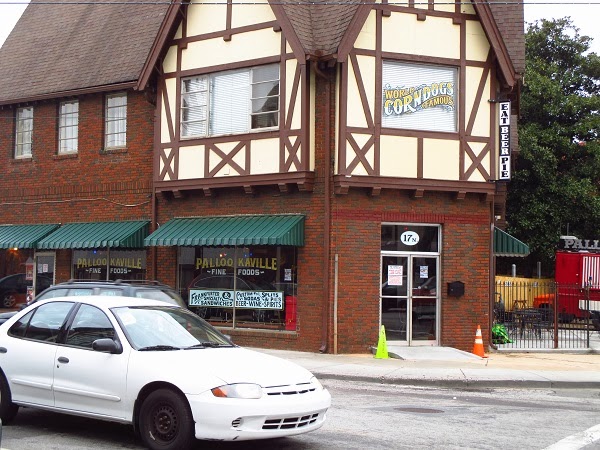 The fries, house-cut, firm and really tasty on their own, can be enlivened further by a wonderful spice mix called Graveyard Dirt. The taste is a little similar to the deli dust at Jack’s New Yorker Deli. And the drinks are fantastic. Actually, let me pause and praise the amazing crew at this restaurant. In keeping with the collaborative design ideas of a classic American soda fountain and carnival food, the men are dressed in bright, solid red shirts, and the women in bright white, and they are all terrific and splendid people who seem to really love their job. Marie and I were looking forward to trying some of their house-mixed sodas, and our server cautioned us that while mixing and matching could result in some neat flavors, the syrups were all very sweet, and some guests have found a mix too much of a good thing. But she and Marie settled on mixing sour cherry and vanilla and the result was really nice. I had a plain-by-comparison cinnamon soda and it was also very good. Granted, these appear to be the same syrups that the snow cone people use, but most people in town don’t think to offer you a “Tiger’s Blood” soda anymore.

The other thing that the crew at the soda fountain is doing is mixing up some delightfully neat milkshakes. They have three specials right now, and while the Mexican hot chocolate and the Sriracha shakes are getting all the publicity, I love orange creamsicles and so I ordered their “Mr. V.O.” to take with me. It’s a vanilla shake with orange juice and circus peanuts and it was wonderful. And, of course, you can add some booze to these and make them even weirder and wilder.

The party who missed out was our toddler. He had a very busy morning playing for two hours at The Children’s Museum of Atlanta, and he fell asleep just as we turned off Ponce following US-278 past Decatur to Avondale Estates. He slept all through the color and the fun on Marie’s shoulder. We had to find some food for him later, and it simply wasn’t as good as what he missed.

If you’re only reading these chapters, then you are missing part of the story! We have a fantastic Facebook page, where you’ll be able to follow along with much more than just links to chapters here, but additional information about our favorite places, including PR announcements, links when our friends-in-blogging visit them, and other follow-up news about the places we’ve been when we can find it. Give us a like, make sure that you set it up to receive announcements, and tell your friends to come see us!