This is the first of two entries this week in which I will mention a restaurant that I can tell you less about than I would like. In fact, I can’t tell you the most important thing about it: where we heard about it. Well, I suppose “Is it any good?” might truly be the most important part, but as we typically don’t go in for negative reviews here, the fact that it gets an entry at all should be evidence that it’s a good place.

Sometime a few months ago, somewhere, somebody told me that I should stop by Rusty’s BBQ the next time I was in Birmingham and give their white sauce a try. I have found that I’ve been making some pretty serious errors in noting places like this for road tripping lately. People will send in recommendations to us, or I’ll read about them somewhere, and I’ll add the restaurant’s web page to my bookmarks, or I’ll put it on my Urbanspoon wish list. It might be months or even years before I’m able to visit the restaurant – I don’t know when, if ever, I will be in Morgantown, West Virginia, but by thunder, I know where I’m going to eat when I get there – and by that time, who knows where I heard of the place. You’ll be glad to know that I’ve taken steps to rectify this problem, and now have a little document saved in my Google account specifically devoted to telling me who told me to eat where.

This doesn’t do me much good now, sadly. Somebody, somewhere, told me to swing by Rusty’s and give their white sauce a try. That somebody is surely do a wave of thanks. Well, whoever you are, I didn’t like the white sauce, but man, that chopped pork sure was good. 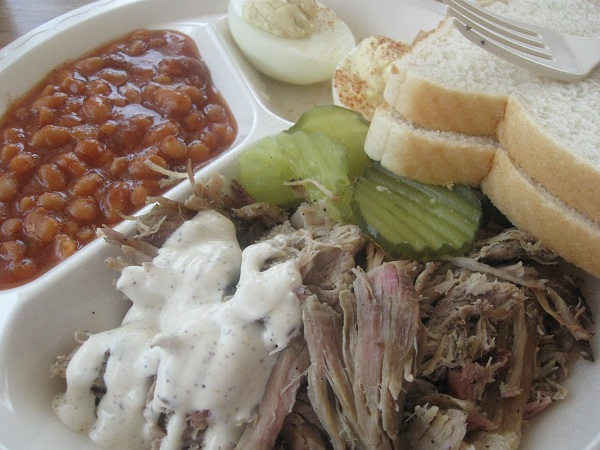 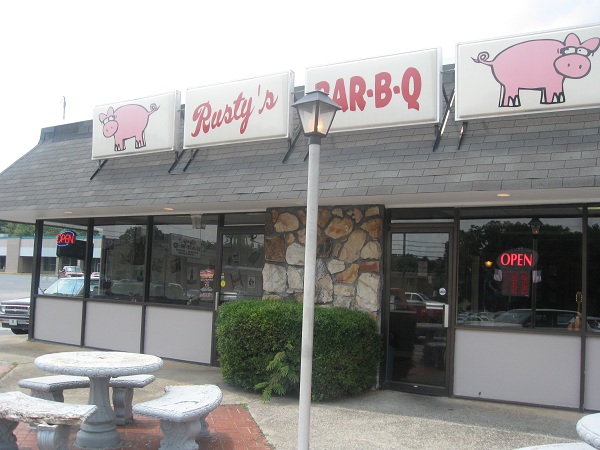 Central Birmingham is just an hour east of Tuscaloosa, and the suburb of Leeds maybe fifteen minutes further. Knowing that we might need something to break up the meals we would enjoy on this drive, we made plans to stop by the Penzeys Spices store in Birmingham’s Homewood neighborhood. We had been to this location once before and bought our combined weight in pepper and Cajun spice, but, well, we use a lot of pepper and Cajun spices at our dinner table and needed restocking. Plus, the Penzeys people had sent us a pair of coupons that we just couldn’t pass up. We learned from the only girl working the register that morning that Penzeys will soon be opening a store here in Atlanta, about two exits away from Marie’s work, in Sandy Springs. That will certainly make it easier to obtain several pounds of their pepper and Cajun spices.

Rusty’s wasn’t much further down the road, but we found something very interesting along the way. You take exit 140 off I-20 and go south not quite two miles. You will pass two other barbecue joints – Huck’s Rib Shack and Old Smokey – along the way. That’s three barbecue restaurants literally within a mile of each other on the same road. Rusty’s, happily, is open on Sunday while the other two are not.

Our destination was set up in what appears to be an old Burger King building. It’s a relatively new place, I think. Not too much history there yet. They weren’t that busy when we arrived, which was probably a few minutes before the church rush was thinking about starting. Some of their desserts were still either in the oven or cooling. Marie and I have an understanding with my daughter that when we do these silly days with four or five meals, she can just have a snack at each one. It’s cheaper for us and it keeps her happy, albeit perhaps disagreeably sugared-up. She ordered some kind of odd, sloppy cake or something, a “gooey cake,” I think it was called, and had to wait impatiently for it to arrive. Very impatiently. Girl needs to learn to relax.

I had the chopped pork plate with deviled eggs – these seem to appear regularly as sides in north Alabama barbecue restaurants – and spicy baked beans. I ordered my meat dry and got a chilled bottle of white sauce and everything was completely terrific until I put the sauce on. If you’re new to my blog, you may not be aware that I went completely gaga for good white sauce when I tried it last year at Hawg Wild, an excellent place outside Clarksville in the north Georgia mountains. I’ve since tried the white sauce at some Birmingham restaurants and love it completely. I’m afraid that the white sauce at Rusty’s really did disappoint me. The best that I can tell you is that it tasted stale. I’m sure it wasn’t, but it ran dirty shoe marks all over my tongue all the same. Happily, I only put a little on my meat. The chopped pork, which tasted rich and smoky, was absolutely fine either on its own or with the house spicy red sauce, which really brought out a lot in the meat. Marie, still satisfied from the ribs at Dreamland nearly two hours earlier, just had a small sandwich slathered with their mild red sauce and was also very pleased with it.

Actually, one other thing about my daughter’s snacks struck me later. When we visit barbecue joints, she typically just orders Brunswick stew. This trip helped me see that this is much more of a Georgia specialty than I had previously thought. Over four days, I visited one barbecue place in Tennessee, two in Mississippi and two in Alabama, and not a one served stew. Well, shut my mouth. Certainly, I have been to many places in other states that don’t have stew on the menu – or, in Kentucky, they might have burgoo, which is a lot like Georgian-style Brunswick stew with more veggies – but until this trip, it never once occurred to me that this might be because this restaurant is not in Georgia. Do Texas-based food writers come to Georgia and make special note that here, customers may order that well-known Georgia treat called Brunswick stew, in much the same way I will mention the deviled eggs in north Alabama?

(And that’s not even getting into the distinct difference between Georgia-styled Brunswick stew, as exemplified by that served at Harold’s in Atlanta and Speedi-Pig in Fayetteville, and Virginia-styled Brunswick stew, which I believe might best be sampled in this state at Sprayberry’s in Newnan and Zeb’s in Danielsville. Much more research is required. Howzabout a grant from Mobil?)

I thought it was charming and cute that the thing that must have brought us to this restaurant ended up being the one thing that let me down. This would definitely have been worth a stop even if white sauce had not been on the menu, and I am very glad (shouts, exclamations, hoots, hollers) that they are open on Sundays so that we could visit as we came through town. I hope that Rusty will understand and accept my burning curiosity about trying as much as I can, however, and be all right with me stopping by Leeds on a Saturday next time, so I can sample his two competitors up the road. Sadly, I don’t think we’ll be out this way again for quite a few more months, though.