Several months ago, I spent some time cleaning up Urbanspoon’s listings of barbecue restaurants throughout Georgia and Alabama – I probably need to do that again – and found quite a few that I had never heard of before. Johnny Mitchell’s is one of those. He and his wife Jill boast that they have been in the restaurant business for 32 years, and that the Smokehouse is their second enterprise. Jill is from California and Johnny from here in Atlanta. His aunt was the owner of downtown’s B & G Restaurant, about which I can find no information online. That’s one of the reasons that I wanted to create this blog in the first place, to keep stories about food and community and dining going, even from a perspective as narrow as ours, with just a little information and a couple of photos.

Euharlee is a very quiet little town of about 4000, most of whom either work at the power plant, Bowen, or in nearby Cartersville. This is one of those occasions where I have to raise an eyebrow about how Urbanspoon draws its urban regions, because calling this quiet and bucolic getaway “Atlanta” really is pushing it*. There doesn’t seem to be a whole lot of businesses in Euharlee itself, and Johnny Mitchell’s is the only restaurant. We picked a perfect evening to drive out this way. The weather, probably for the final time this summer, was incredibly mild, and the baby was in a terrific mood, babbling and cooing the whole drive. We raced a freight train into Cartersville, driving underneath a gorgeous old bridge on GA-293, and had the road to Euharlee mostly to ourselves.

The restaurant itself was quiet, only about half full. Business has apparently been very good. They’re now open for lunch seven days a week, and the walls are lined with trophies and plaques, showing off both their competition team’s prowess and the civic awards naming this restaurant the best in Bartow County for the last three years. I’m happy to say that the meal met the awards’ hype. 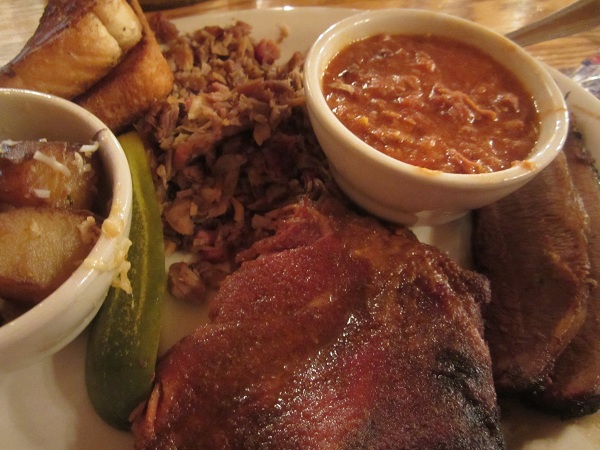 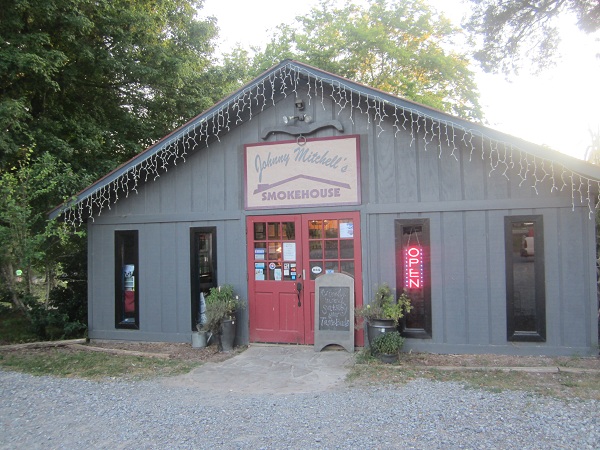 Marie had a chopped pork plate with fried zucchini and baked beans and I, after a very light breakfast and a simple vegetarian lunch, went to town on a big sampler plate with chopped pork, beef brisket and ribs, along with garlic home fries and Brunswick stew. Of the three meats, the pork was the least engaging. It was a little smoky, but it was just too juicy for my liking. It tasted all right, but it didn’t have that special “oomph,” if you will, that the very best chopped pork has.

I didn’t mind much, as the brisket and the ribs were both really something. That said, Marie preferred her pork to my brisket, so your own mileage may vary, but I thought the brisket was perfectly tender and seasoned just right, only a little bit salty. Both the brisket and the pork went very well with the house sauce, a standard, thick and brown tomato-based version. There’s also a hot sauce that is a spicier edition of the house sauce, and a black sweet sauce that’s curious, but not to my taste. I was reminded of the incredibly sweet and thick sauce at Little Dooey in Starkville, and can’t think of any others for miles that are so sweet. Finally, there’s a thick and mildly spiced mustard sauce.

The ribs were my favorite, though. Meaty and tender, they had a very mild zing and a faintly sweet flavor. While most of the meats at Johnny Mitchell’s are smoked over hickory, both the ribs and the chicken are cooked over cherry instead. Whether that’s the source of the sweetness, or something in the rub I can’t say, but I could certainly have put away far more than this.

It was a fine meal, but dessert awaited us back in Cartersville. Fortunately, we were able to find a parking place. There was an antique car show and some classic rock cover band (must they all play “Margaritaville?”) packing in the city’s small downtown area. We navigated through that mess and parked in a Goodyear lot to get some shaved ice at Coconuts. 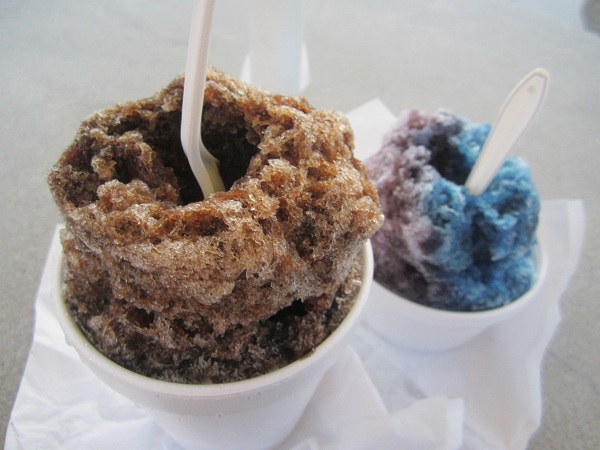 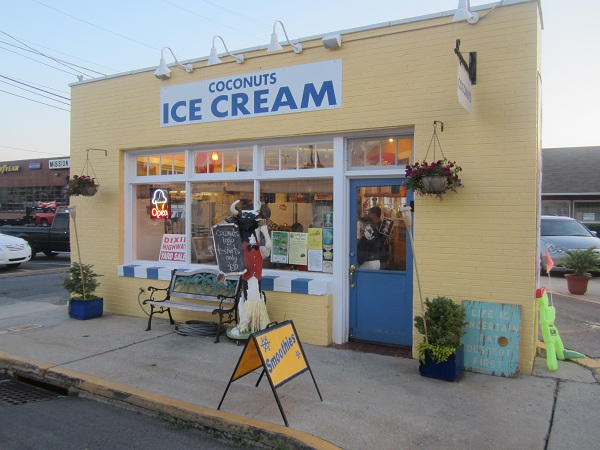 None of the high schoolers at Coconuts could tell me what this building was originally. I wonder whether it’s always been an ice cream parlor of some kind; it’s the right shape. There’s not a large dining area; much of the space is taken up by the freezers and the shaved ice machine. There’s an outdoor patio and a drive-through window, and on warm summer evenings, this place gets really busy.

They do shaved ice here in four sizes and a really long list of flavored syrups. I forgot to ask what brand of ice cream they carry here, but they usually have sixteen flavors from a rotation of 39. I was intrigued by a treat that they call a tsunami. They put a small scoop of ice cream in a cup – I picked vanilla – and then bury it under shaved ice and syrup it. My cola shaved ice mixed well with the vanilla ice cream and tasted a little like a float. They also do half-and-half syrups; Marie picked grape and blueberry.

It was a good evening to kick back outside and have a sweet treat as the sun went down, and shrieking bats flew overhead, flocking around the Goodyear building. The baby seemed to like the taste of the shaved ice, but eventually he decided it was too cold and vigorously shook his head against the idea of more. Me, I’d be happy to stop by for another tsunami any time.

*On a related note, earlier this month, Urbanspoon finally conceded that Ellijay should not be part of their sprawling “Urbanspoon Dalton” metro and cut that town and its restaurants, including two that we had visited, loose into Urbanspoon Georgia. I wonder whether I should suggest that Euharlee and Taylorsville be similarly cut loose from Atlanta? Then again, I think that Rome and Summerville have more business being listed as a major metro than Dalton in the first place. More on this geeky topic, inevitably, the next time we stop for a snack in Dalton.