In the late 1980s, when I thought that I liked hippie music – turns out I don’t; go figure – I became aware of the small Mellow Mushroom chain. Fueled not just by Jefferson Airplane records, but by the character of “neil” – always lower case – in TV’s The Young Ones, I probably talked about having a pizza here for years before I actually did. I always said the name in an approximation of neil’s voice. “Mellaww Mushroooooom,” usually with a slight nod and two fingers for peace. Ah, teenagers. The restaurant was started here in Atlanta in 1974. I think that the second store didn’t open for another eight years. They’ve had a presence in downtown Athens since 1986. While still mostly in the southeast, the chain now has a presence in seventeen states.

That Athens store was the one that I’ve visited the most, although there used to be a good location in Douglasville where I met up with some gaming buddies a time or two. In Athens, I made a valiant attempt at getting my name on the wall for finishing their Hundred Bottle Beer Club. They did have quite a remarkable beer list, both bottles and draft, which later led some of their employees to move to Decatur and open the amazing Brick Store Pub. I actually learned a lot about beer at this Mellow Mushroom. While I’m certain that many of you could challenge me with lists of beers even worse than some of the stinkers that I had to swallow to get as far down this list as I did, I’m pretty sure that I’ve never had a beer as close to being as bad as this thing in a little green glass “barrel” called Mickey’s. But on the other hand, I had my first bottle of the magical and amazing Samuel Smith’s Oatmeal Stout here, so it all works out.

Speaking of magical and amazing, I once went here with a buddy of mine to work on our respective efforts to finish this list, and for him to beat me black and blue at darts. This is no difficulty; I am, in truth, among the worst darts players that there has ever been. But magic and beer collided as “Stop Me if You Think That You’ve Heard This One Before” by the Smiths started, and I grinned at David and threw three triple bulls. One. Two. Three. I had to win one set that evening; it might as well have been done perfectly.

I seem to recall that they served food at this place as well. Eventually, however, I think that somebody decided that this store had set new standards in looking like an embarrassing, unsafe, dark basement, and wasn’t doing the chain’s cartoony and light image any favors. It closed in 2006 and they reopened up the hill on Clayton in a shiny, family-friendly space full of cartoon characters and bright colors. 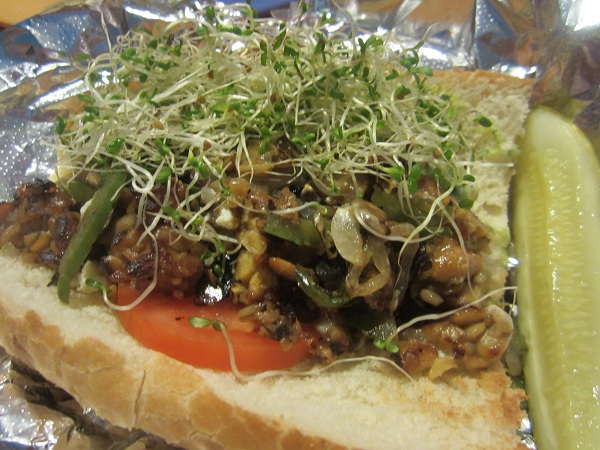 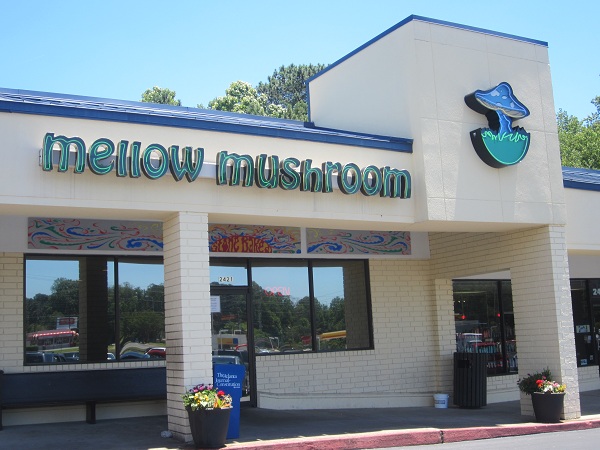 Mellow Mushroom had fallen off our radar, and I don’t know that we’ve visited any store, anywhere, since Marie and I stopped by the shiny Athens store in the fall of ’07, when we were dating, and downtown, and I wanted to see what had gone on with the football that afternoon. A couple of Saturdays ago, we were thinking about what we might have for lunch. I was in favor of something light and vegetarian, since I was planning for a mammoth, unhealthy supper. Marie and my daughter agreed on sandwiches, and Urbanspoon suggested that the highest-ranked and nearby sandwich place that we had not visited was the Mellow Mushroom over on Shallowford Road, in the neighboring Lassiter High district.

We were really pleased by how this location has decorated, and how good the staff was. Mostly hands-off, we got to see them cutting up and joking around with some kids on this slow Saturday afternoon. The interior is packed with things to look at, including old LPs on the back wall in front of the “flushrooms” (groan!) and lots of vintage posters for old rock shows (“Hey, man! The Turtles are at the Fillmore!”). However, the real charm came from the ceiling tiles. There’s so much to crane your neck and see here, ranging from enthusiastic kids’ artwork to really great revisualizations of things like “Mellow Submarine.” Put another way, by the time a customer has absorbed all the silly puns, cartoon mushroom people and hippie records on the walls and ceilings, the food should be about ready.

Marie changed her mind and ordered a tossed salad. My daughter had a meatball sub and I had a quite good tempeh hoagie, with feta cheese, mushrooms, onions, peppers, lettuce, tomatoes and sprouts on grilled French bread. It was an absolutely fine way to kick back and have a reasonably healthy and reasonably priced lunch in a fun environment with lots to look at. The sandwich was just terrific, and while I was disappointed with the iceberg lettuce on Marie’s salad, at least they do have several other options available for guests who want to build something different.

We may go back to another location sometime and try the pizza. To be honest, it has been so long that I’ve forgotten how that tastes. Must’ve been all the beer that I drank back then, deadening those brain cells that store taste information.

Other blog posts about Mellow Mushroom: