Since I grew up just on the other side of the interstate from Vinings – literally, when we were in middle school, we’d use a huge storm drain to get from the woods on one side of I-285 to the other – I got to see that neighborhood grow and swell. The church that we attended now houses both a Mellow Mushroom and a La Paz, and the small plot of land across the street was transformed into the Vinings Jubilee shopping center when we were in high school. Then we spent most of eleventh grade being bored on a Friday night being told to beat it off the property. None of us in those days, after all, were really dressed for an evening at Cafe Chanterelle, then, the crown jewel of the facility. Nor had we any money.

Time marched on, and in 1997, a very nice bistro called Soho opened in Cafe Chanterelle’s former space. Originally, Soho was run by Frank Smith, Jeff Trump and Mike Horosh, who worked together at Sandy Springs’ Brooklyn Cafe and at Alpharetta’s since-closed Ebbetts Field Grill. I got to meet Smith, who, these days, co-owns the restaurant with his wife Susan, an artist, when the restaurant invited some media down for a visit, and he told me the fun and fascinating story behind Soho getting started.

See, the other thing about growing up where I did, and having parents who were politically active and part of the old Paces Ferry Action Committee and, Sancho Panza-like, fighting against, among other things, the great big Home Depot corporate offices that were built there on the highway, is that I heard the name Felix Cochran all the darn time. Cochran owned much of that land around the north part of Vinings, including much of that big slope where the Overlook buildings are. We got chased off the Overlook parking deck in the late eighties all the time, too. It turned out that the Brooklyn Cafe was one of Cochran’s favorite restaurants, and one of his last requests was that his people would get that team to open a second Brooklyn Cafe in the Jubilee. They went with something a little bit different instead, and the results have been pretty jawdropping. 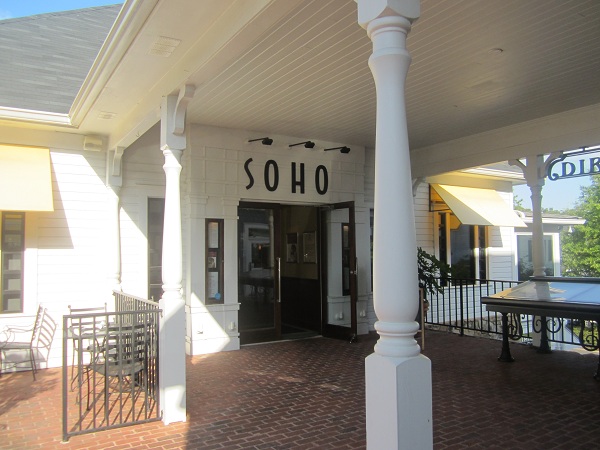 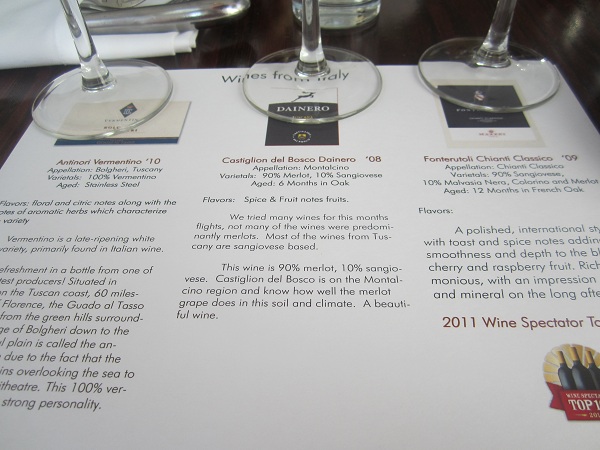 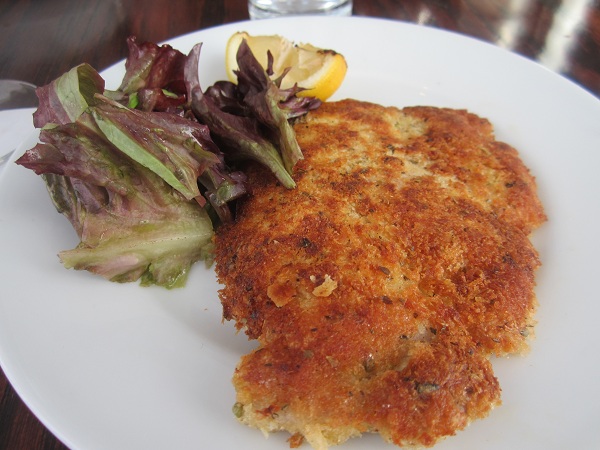 Soho’s executive chef, Jeff Ahn, has revamped the menu several times over the years, and one of the more recent developments has been weekly tapas and wine pairings. Each month’s theme is accompanied by new treats and flights of wine. May was Italian month, and my order was pork Milanese with roasted lemon and greens. The other tapas on this week’s menu included a spinach and artichoke ravioli in a lemon cream, and braised lamb with fried asparagus. The pork was very flavorful, and I loved the taste of the lemon over it.

As I have mentioned in a couple of previous entries, I am still very much a novice with wine, but I can say that two of the three on the flight were extremely good. My least favorite of the three was the Dainero (Castiglion del Bosco ’08), a Merlot/Sangiovese blend that was very strong, and might have gone better with the ravioli than with the tender pork, which it threatened to overpower. Much better was a Chianti (Fonterutoli Classico ’09), which was rich with fruity flavors and a lingering raspberry twist, but the Vermentino (Antinori, Bolgheri ’10) was by far my favorite. Good heavens, I’ve never enjoyed a white wine so much. It was powerful but subtle, packing a delicious grape punch inside a deceptively light flavor. 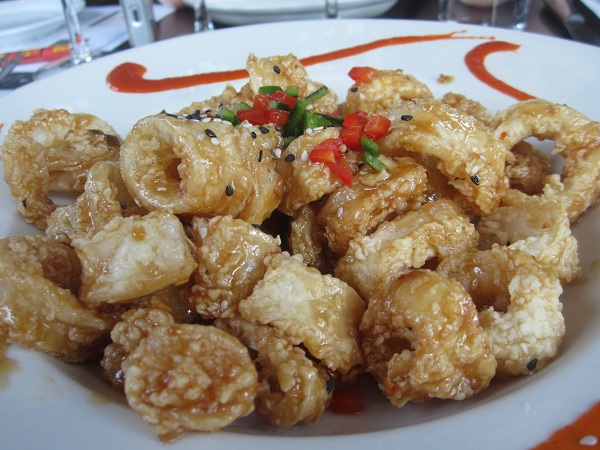 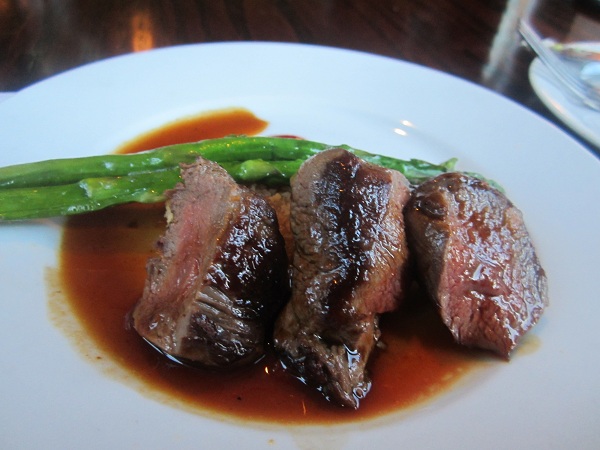 Frank asked for some more samples to be brought to our table, along with another glass of that amazing Vermentino. We shared an order of what is, bluntly, the best calamari that I’ve ever had before. Very lightly battered, and served with a ginger glaze and a diced pepper relish, these put everybody else’s calamari to shame.

We also sampled the “Chilean sea bass,” which, thanks to this hobby, I know is really Patagonian toothfish and was very tasty, and something I’ve not seen on a menu in a really long time, elk. This steak, which is farmed in New Zealand, was incredibly light and tender and just perfectly seasoned. Chef Ahn has really nailed the preparation of this. The taste surprised me; it was much milder than I was expecting. Much of Soho’s menu is locally sourced, including smoked meats from Patak in Austell and ice cream from Greenwood in Chamblee, but nobody local is offering elk, necessitating quite an adventure getting it here to be served promptly.

This was a really, really nice evening out. A night at Soho is going to be a pricier one than most of the restaurants that we’ve featured at this blog, but it is definitely worth it. It’s an excellently-staffed bistro with incredibly good food, and I wish that it had not taken so long to come and visit. I’ve been craving that calamari for days. The Vermentino as well.