This is Marie, contributing an article about the Food Truck Park, the place that almost didn’t happen. You see, Atlanta laws make it mandatory for food to be cooked in a stationary location. Cooking in a truck that is parked doesn’t count. So practically speaking, the only businesses that can own food trucks are actual restaurants, or businesses that have a relationship with one. There are also restrictions on where the trucks can park and serve food. Luckily, there are events such as Street Food Thursdays downtown or Food Truck Wednesdays in Virginia Highlands, plus the Food Truck Park, but it’s not the same as having a BBQ truck stop by your work parking lot for an hour during lunch time so you don’t have to cross the street to the fast food place you’ve eaten at way too often, or get in your car to drive somewhere.

The park also closed practically instantly after opening this year, due to what they described as permitting issues that had nothing to do with food quality. According to other sources (see Eater Atlanta), the problem was the requirement for one license, one location, one truck. If that makes sense for a food delivery device that has wheels on, you might have a future in Atlanta politics!

The vendor attendance at the Park changes. Obviously, there are limitations on how long you can serve food that had to be prepared elsewhere, and every time you leave the park to restock you have to find a new place on your way back. We saw a couple of new arrivals try to fit their truck into the spaces left from other departures, and felt sympathy and admiration for the challenge to their parking prowess. Especially since in one of those cases said prowess was not really noticeable. 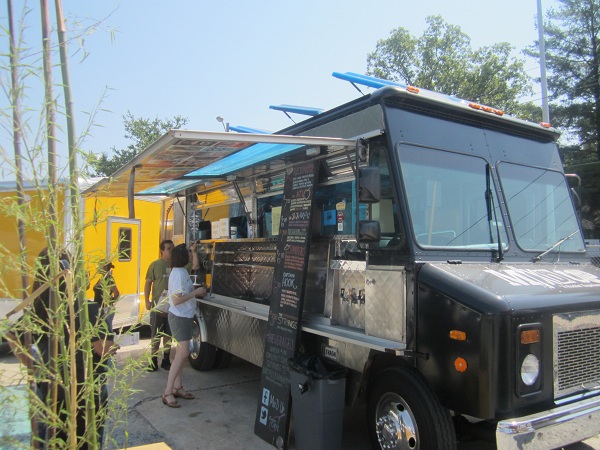 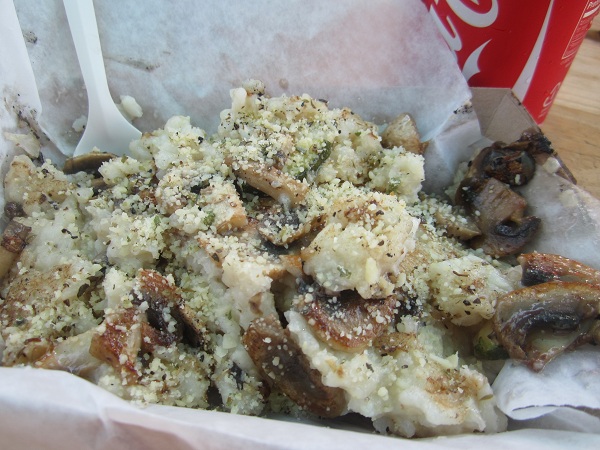 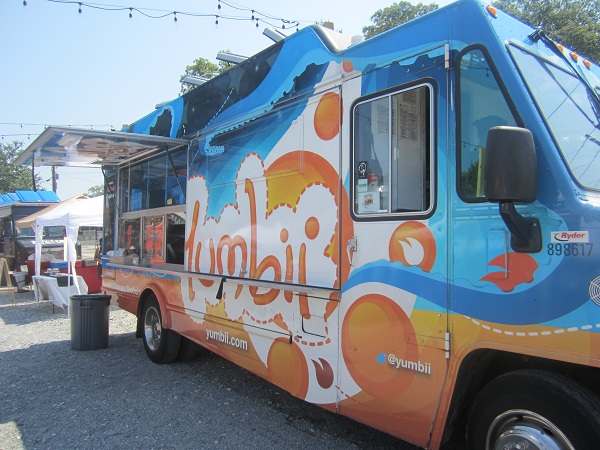 On this particular occasion, the regular Saturday farmer’s market was taking up some of the spaces. The very best shady spot was taken up by a truck full of potted plants, and some of the spots in the middle had been taken up by crafty types and a vegetable vendor. Since the upper (and much better) truck parking lot is a tad cramped and the trucks themselves are less than comfortable inside (the lady who served me said it was always at least 10 degrees hotter inside than outside, and outside was rather wilting) the general goodwill and friendliness of the vendors had to have been strained. Nevertheless, everyone I spoke to was fairly cheerful despite the heat.

I was the first to get my food, because the girlchild had to wait for the Yumbii truck to open. Grant was disappointed that the barbecue truck was present but not open. One has to wonder whether they are allowed to duck out and restock without actually moving the truck itself. My selection was a truly wonderful mushroom Parmesan risotto from the Mix’d Up truck. I generally forgive purposeful misspellings for advertising reasons, but if the description hadn’t been so tantalizing I might have passed. The portion wasn’t huge but it was extremely flavorful, the cheese was top notch, and the baby ate about a third of my food. They said the recipe was in this month’s Flavors magazine but I found it online here. I recommend giving it a try! The taste Grant shared of his Yumbii was interesting and I’ll have to give it a shot next time.

It wouldn’t be a real entry from me without something sweet. King of Pops brings a cart to the park and were just setting up that day’s chalkboard as we finished our meal. My selection this time was blackberry mojito, which was excellent. I think a minor quest will be to see how many of their flavors I can taste this summer.

This would be one of those occasions where Marie and I don’t really agree. I had been hoping to be persuaded that this was nothing at all like a mall food court, and I had been hoping to visit Sweet Auburn Barbecue, Mighty Meatballs, or maybe Banged Up and Mashed. What we found was, for me, quite disappointing. None of the trucks that I was hoping to sample were there that morning. Well, Sweet Auburn had staked out a space, but it wasn’t open. The other trucks were not among those present. What were present were a bunch of covered tables selling unnecessary tat: organic shampoo, artisan fudge and designer doggie biscuits, all under the aegis of being a “farmer’s market.” At least if we’d gone to a mall food court, we could be assured that the Orange Julius stand wasn’t going to get waved away because the jewelry lady had taken its space.

So I settled for a pork taco from the Yumbii truck – it was, like the tacos at their base at Hankook, completely delicious – and called that an appetizer, and then we drove to get some barbecue somewhere else. 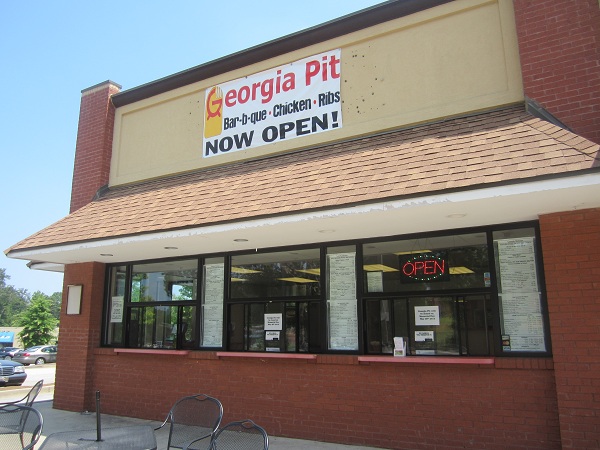 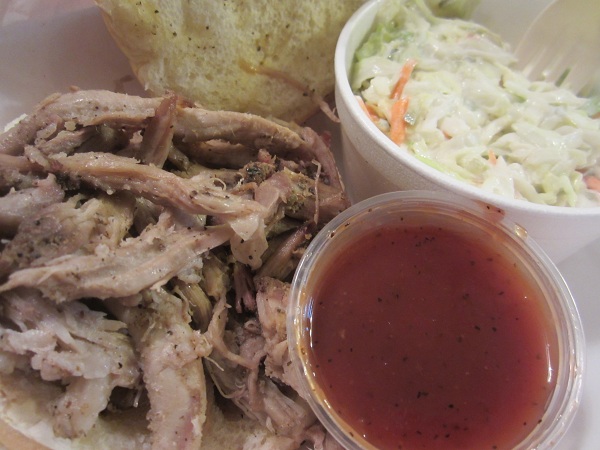 Since Sweet Auburn was not available, I still wanted barbecue and remembered that there is a takeaway place near my mother’s house. We were going to visit her and give her some grandchildren time after lunch anyway, so I just brought a sandwich with me. The stand is called Georgia Pit, and it’s set up shop in what used to be a Bruster’s Ice Cream on South Cobb Drive, next door to a J.R. Cricket’s.

Pitmaster Ron Smith opened this place toward the end of 2011 and is smoking up some very, very good pulled pork over hickory. The meat has a very strong and smoky flavor, and they claim upfront that it won’t need any sauce, although they make two traditional brown tomato-based versions available. They’re quite right; it is certainly very good, memorable meat, and their slaw is not at all bad, either.

I’ll give the Food Truck Park another try sometime, as I am keen to visit Sweet Auburn and the other trucks that I mentioned, but I am glad that my backup plan worked out as well as it did.

(Update, 10/20/12: Sadly, Georgia Pit closed this month. This good place never attracted any attention or buzz, and probably suffered from its location, so close to the popular Jim ‘n Nick’s. Best wishes to Ron wherever he goes next.)

Hey! Would you believe this is our 500th post?! Thank you for reading!