A reader had recommended that we give Scott’s Walk-Up Bar-B-Q in Bartow County a try. We didn’t have any specific plans for the second Saturday in October, and as our dance card started to fill with some major plans through the end of the year, I thought it a good idea for the four of us to just hop up the road for a quite short little trip. Scott’s is maybe half an hour from our place in Cobb, and while our hobbyist friends have mostly shied away from Cartersville – Dustin of the Georgia Barbecue Hunt is the only one that I can find who has paid Scott’s a visit – this place has received some solid writeups from newspapers and magazines, and has a devoted following.

Everybody was in the mood for pulled pork, so it’s just as well that this is one of Scott Panter’s specialties. He’s also known for some supposedly excellent beef brisket, but this is sadly only available on Fridays. The pork is pulled much longer than almost any other place that I can recall. If you’re expecting to just sit down with a fork and munch away, you’ll be stymied for a moment while you carve smaller pieces. I think that the advantage to pulling to this length is that guests get a good mix of meat that’s white on the inside, and pink and brown on the outside, with a little bit of bark. It’s very tasty! 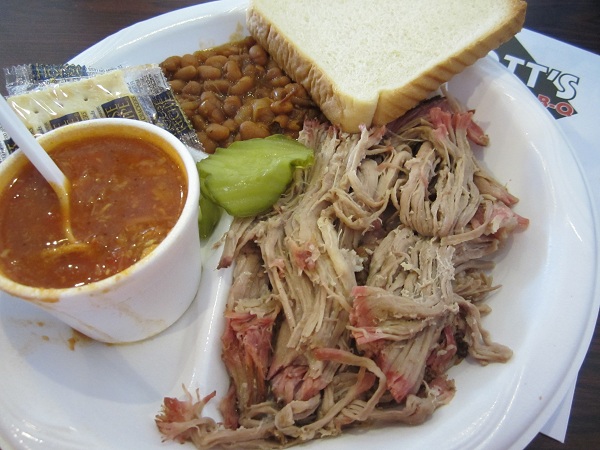 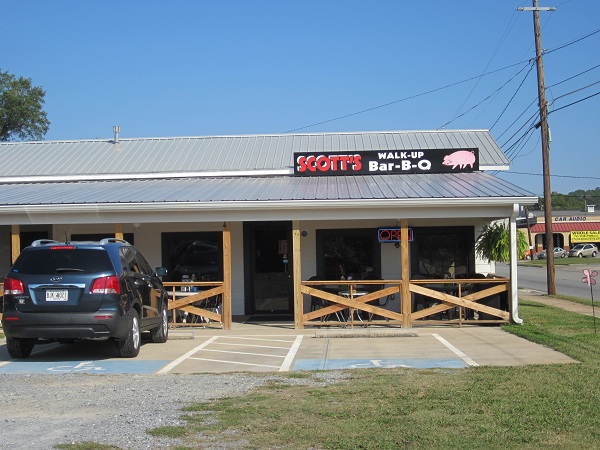 Panter had only two sauces for a time. These were his house Georgia sauce, which is thin, sweet and brown, and a North Carolina vinegar sauce, which splashes pink with pepper flakes over the meat. They’re both very good. Recently, he’s added a bright yellow, peppery mustard sauce as well. I alternated between each and enjoyed them all.

For sides, I had some excellent Brunswick stew and good barbecue baked beans. The stew was really meaty, with no corners cut with extra vegetables or potatoes here. Everybody left very pleased and happy, even the baby, who chowed down on a hot dog that the restaurant sold us, and some pasta and tofu that we brought.

We were a little foiled in our plan to get some shaved ice at Coconuts for dessert; we took advantage of Scott’s early opening – 10.30 am is definitely the time to sit down for barbecue on Saturdays – but unfortunately, Coconuts does not open until noon. We didn’t feel like waiting around for a half hour – that really would be asking a lot of the baby – but we were pleased to get some cheap gas while we were in town. At $3.37 a gallon, that was a full nineteen cents less than any of the places in Cobb County. Sounds like a good reason for everybody else with a barbecue blog to come to Bartow; you can fill up cheaper here than any place in town, too!