…Atlanta store # 3 for Del Taco opened in the middle of July in Smyrna, at the intersection of Cobb Parkway (US-41) and Herodian. Most recently, the building had been home to one of the nine El Pollo Loco stores that briefly found a home in this region. This is the first of the new stores to directly compete with Taco Bell – there is one across the street and a couple of hundred yards south – and also with a traditional tacqueria. The excellent Tacos La Villa is just another couple of hundred yards north.

Now, the really interesting thing here is that while Taco Bell’s principal advertising gimmick of late has been to market themselves even more firmly into the vital “alcoholic college student” demographic with their Doritos tortilla chip shells, Del Taco is making a genuine effort to go the other way and try for the more traditional approach. This summer, through September, they are selling a lineup of pork “Carnitas” tastes that have more in common with actual Mexican tacos than the California style that they typically offer. 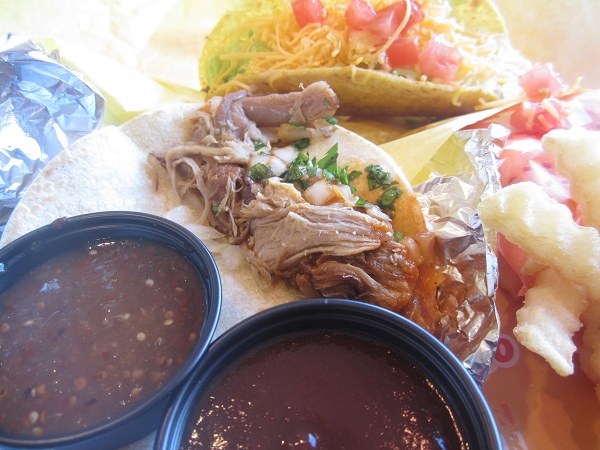 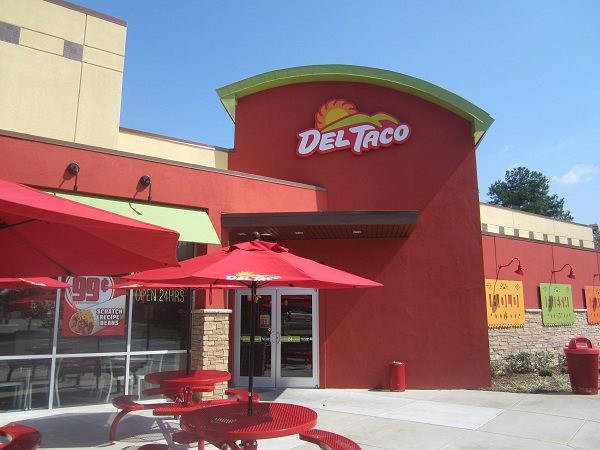 Del Taco claims that their carnitas are “unlike anything available in the quick-service category.” The pork is simmered in small batch kettles as found in the cooking methods of the traditional Mexican kitchen. It’s offered in three different varieties of burritos, over their nachos, and as tacos. The hopelessly poor photograph above shows the honest difference between the al carbon traditional taco with the carnitas pork, and the standard California version with which Del Taco’s guests are familiar.

My take is that it’s pretty good, although I think that it would be better if the staff on the back line assembled it with a little more care. I have stopped by the Kennesaw location (# 2) several times, and those guys have yet to either make a mistake or assemble my order with anything less than full attention. The kids at the Smyrna store were still getting their opening week jitters out or something. It does compare favorably to a traditional-style pork taco. I have had those at Tacos la Villa, and they taste comparable enough. On the other hand, Tacos la Villa sells theirs for fifty cents less than Del Taco, and their salsa bar is a genuine sight to see. If you’re curious, you can compare the two yourself for the next month or so; the Carnitas menu is a limited-time offering, and will be vanishing in September.

The chain is continuing to focus its development in Cobb County, almost as though they predicted they can get a little publicity from us or something. Store # 4 is said to be in the works just a stone’s throw from the Marietta Square, and that will certainly be an interesting story to tell, although the building still has “available” signage on it, and no work has been done to get it ready for Del Taco. I’ll explain what makes this particular location notable after it opens. (Note (9/15): This store never opened. The fourth store actually came to GA-92 in Woodstock. The property mentioned here was the former Krystal, which became a Starbucks instead. I no longer recall what made that “particular location notable.”)