We should probably all agree that there must be at least two types of hot dogs.

It really feels like The Atlanta Journal-Constitution polls its readers every other month on the best of this food in Atlanta or the best of that. I want to say that it was burgers most recently. Proving that people just don’t define anything the same way as anybody else, whenever it’s time for people to nominate and argue about hot dogs, scores and scores of people name The Varsity. They do this in much the same way that the runaway nominee for the “people’s choice” for best milkshake in the city is that machine-pumped peach-flavored goo that shows up in the summers at Chick-fil-A stores.

Varsity dogs are good. In fact, in the competition for “best Varsity dogs,” they’re the clear winner. There are really big differences, though, between the glorious, charcoal-grilled dogs at Barker’s Red Hots, or the Vienna Beef Company Chicago-styled dogs available at various locations around the ‘burbs, or those giant, tasty beasts you can get at the suburban Cheeseburger Bobby’s chain, and a Varsity dog. They’re all “hot dogs” in much the same way that the Pentagon and that teeny little two-pewed chapel with the low ceiling on US 17 near Darien are both “buildings.” It’s foolish to define one in terms of the other when their differences are chasms wider than their similarities.

I mention this because a high school friend who lives in Arizona was shocked, startled, taken aback and just a little baffled to see me roll out the red carpet on Facebook for Del Taco to move back to Atlanta. Surely, he reasoned, if I wanted a taco, I could get much, much better tacos from any one of dozens of establishments around town, and he encouraged me to find better. As he owns a highly-praised barbecue restaurant in Flagstaff that I quite genuinely would love to visit, should the funds ever become available to go to Arizona, he speaks from the heart.

Now, I make no apologies, and I define the pleasure that I receive from Del Taco to be quite genuine and not at all guilty. As food hobbyists, of course, Marie and I are expected to fly the flag of independents and support local culture, which makes sense if you think about it, because if we didn’t honestly enjoy independent restaurants and businesses that serve the local community, we would not have developed our way into this hobby of blogging about our lifestyle. So when all reason and objectivity breaks down and I start bellowing cheers for a fast-food joint, there’s a sense that I’ve either lost my marbles completely or cashed in my credibility chips. But that is not the case at all. I have visited many excellent ostensibly-authentic taquerias in the region, from Nashville to Athens, since starting the blog, and had some really terrific ostensibly-authentic tacos. Give me a handful of chopped tripe with onions and a little avocado sauce on two freshly-grilled tortillas and I’m as happy as can be.

Those are one type of taco, and Del Taco’s are another type of taco entirely. They have nothing to do with each other besides sharing a name. If the California-style, fast-food rendition of ground beef, lettuce and cheese on a hard, U-shaped shell had been called an Ocat when it evolved in the 1940s, we wouldn’t be having this conversation. What my old friend perceives as an inferior taco, I perceive as something entirely different. That said, I am willing to admit that I can play the equal time game, and give a few column inches to a couple of the many places in Cobb County that do it the Mexican way as opposed to the California way. They’d do me until the Kennesaw Del Taco opens, anyway. 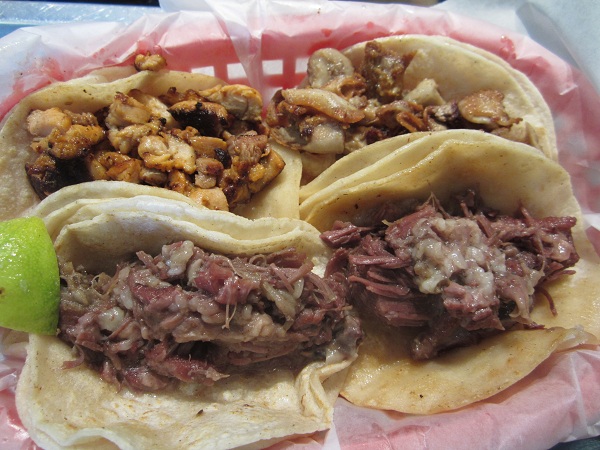 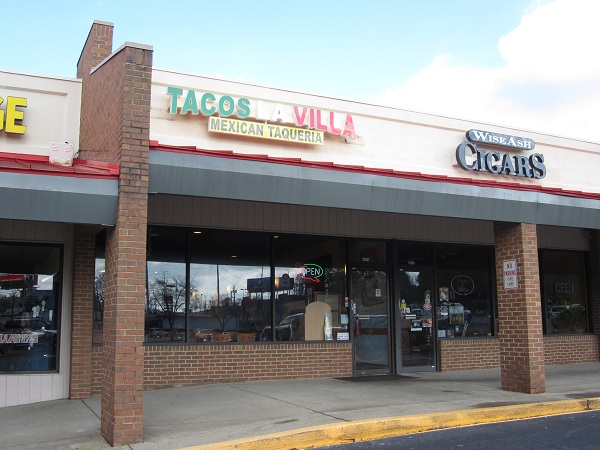 First up was Smyrna’s Tacos la Villa, which is in a strip mall that should be quite familiar to readers of this blog, as we’ve visited two of the restaurants in it already: Thompson Brothers Bar-B-Q and Yakitori Jinbei. This place is run by the fellows who used to sell their wares at the Supermercado la Villa on the other side of this shopping center, and, in a see-it-to-believe-it bit of restaurant design, they took over a closed Quizno’s storefront and did not change a blessed thing. Seriously, you step into this place, and it is a Quizno’s. Same chairs, same signs. The only difference is that the menu board is gone, with la Villa’s various low-priced offerings, including a clutch of dollar tacos, listed in its place. I had two cabeza and one each of tripe and chicken.

Well, another very odd change is that somebody found some framed autographs and fading publicity photos of Hollywood celebrities from days gone by, like Charles Bronson. I sat underneath a photo of Don Rickles, apparently from the mid-70s sitcom CPO Sharkey.

Tacos la Villa is famous for its salsa bar. They let guests just have at it, with a variety of vegetables and sauces to pour atop the taco meat. I find that a little lime juice and onion work wonders for cabeza, but the chicken was the standout and that went best with some quite hot red sauce. I saved it for last and, as much as I enjoyed the cabeza and the tripe, and the opportunities to try different flavors, I found myself thinking that four chicken tacos would have been even better.

For readers like me with really sensitive snouts, sadly, I have to point out that, as the photo shows, there is a cigar shop next to Tacos la Villa. It reeks something powerful and it seeps through the walls. On the far side of the restaurant space, underneath Rickles and Bronson, I couldn’t smell anything, but it certainly stinks to high heaven outside and as you enter this place. That was the only downside to a fun and very tasty lunch. I ate very well and also enjoyed a small bucket of horchata for under seven dollars.

Nearby in Marietta, a shop called Taco Loco has also occupied a former big-league fast food joint on Powder Springs Street. This was the original store, and only one left standing. They had expanded to a second shop in my neighborhood and were planning a third in Woodstock when some rug got pulled out from under them in 2009 and they retreated. In a really sad development, that second store had moved in to a former Philly Connection on Canton, and the wonderful owners kept up their contract with Coke to keep bringing the Fanta Birch Beer that I love so much. Would I really stop by a restaurant for a single taco and a large birch beer? Darn right I would. 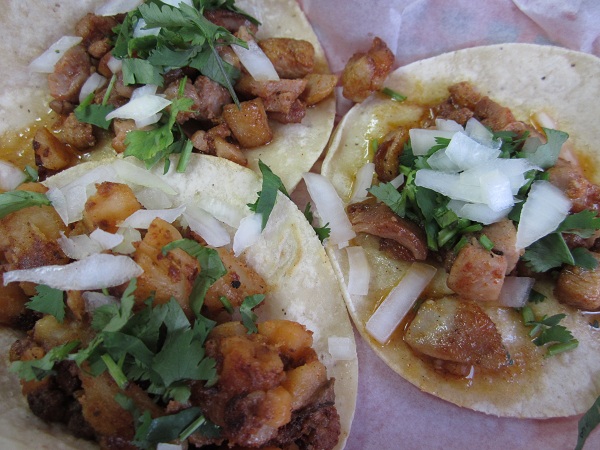 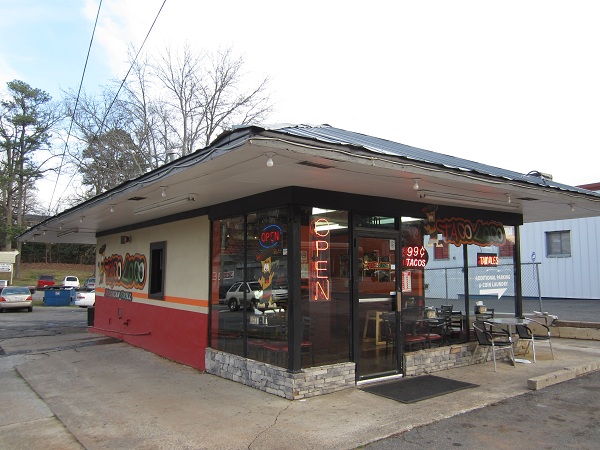 The original Taco Loco is in one of Marietta’s uglier avenues, at Powder Springs and Garrison, just past those apartments that sort of sit high above the road on the right and are boarded up and condemned, and just past some old residences-rezoned-commercial on the left that are also boarded up and condemned. The restaurant’s small parking lot has been used for shelling practice on a mortar range.

It’s unfortunate that Taco Loco has struggled and been forced to regroup, because they’re very good. On this visit, I had a couple of fine chicken tacos and one with potatoes and sausage, along with the requisite big cup of horchata. Perhaps the chicken wasn’t quite as good as what Tacos la Villa offers, but it was still perfectly good and perfectly inexpensive, and this place also scores with an awesome, very hot orange sauce. The staffers are just terrific at their job.

Taco Loco’s menu is fairly dense with offerings, many of which take regional tastes into account. They do all sorts of Americanized takes on things like nachos in addition to the more traditional things. Spelling this out, amusingly, in deference to visitors used to what’s advertised on billboards and TV, the tacos here are available either “Mexican style” with onions and cilantro, or “American style” with lettuce and cheese. Mine were “Mexican style,” of course. I didn’t come here to eat ocats, after all.