A couple of Saturdays ago, we made some plans and, helplessly, watched them get derailed by everything that could go wrong over the course of an afternoon this side of a car fire. Part of those plans included getting some supper, but as the sun went down, neither Marie nor my teenage girlchild nor I really felt like driving inside the perimeter to our original destination. The baby didn’t have any objection to what we did. He squealed and laughed and bellowed regardless of what went on, at least when he wasn’t snoring, anyway. Two days before, I had visited our friend Rebecca, who writes the wonderful Atlanta Foodies blog. She had recently written about her visit to the latest location of Blue Moon Pizza and made it sound incredibly tasty. So this was on my mind as my family considered and debated what we might do instead of our original plan.

I was hesitant to suggest pizza; Marie was, at the time we did this, just a few weeks away from the frequently-mentioned forthcoming indulgence of the Festival of Dairy. Now, Marie is strong in ways that would startle her oldest friends, but she’s only human and she really loves cheese and misses it a lot. I knew that she has the willpower to turn down a nice pie with lots and lots of extra cheese, but it’s getting to the point where she doesn’t want to fight it any longer. Would it be cruel to suggest going to Blue Moon? Rebecca really did make it sound good.

“BOOM! OH yeah,” said my daughter. “You KNOW you want some!” There were some sort of hand gestures. Did I mention that she’s a teenager?

Marie looked at the floor and almost imperceptibly shook her head a little. After a beat, she quietly replied “Maybe we could go to a pizza place that has salad?” Indeed, Blue Moon does offer salad, and, neatly, theirs is served on a little “bowl” of pizza bread. Marie had the house salad, which is mixed greens tossed with tomatoes, red onions, carrots, and artichoke hearts in a vinaigrette dressing, and didn’t even notice the two insensitive clods gobbling down on cheese next to her. 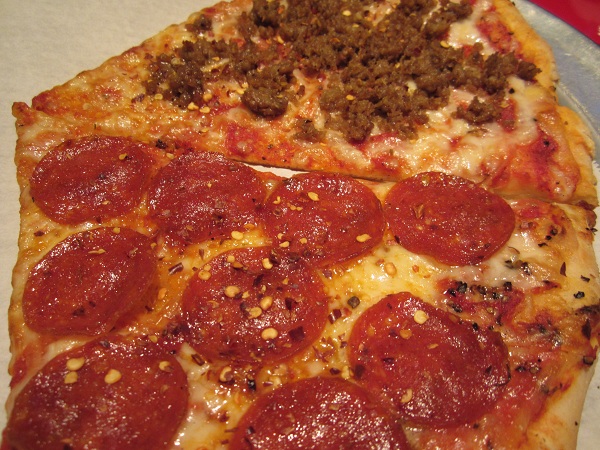 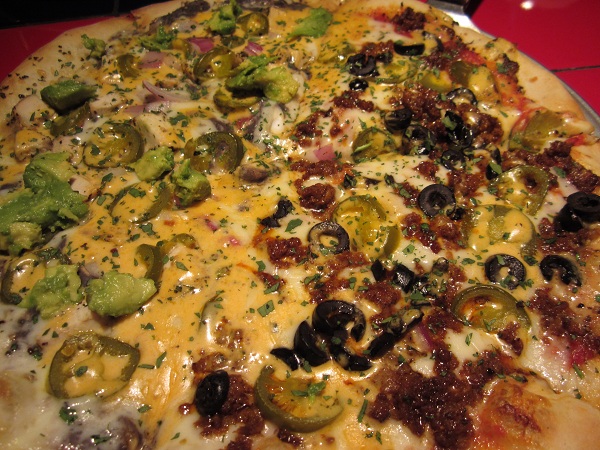 Blue Moon offers a variety of specialty pies with some very neat recipes, and, even in the small, 10-inch personal size, they will do half-and-half pies. They are called, of course, “Half Moons.” I went with the pie that Rebecca recommended, splitting a Santa Fe with a Luna. The Santa Fe comes with black beans, chicken, jalapeno peppers, red onions, spicy ranch, cilantro, fresh avocado, and a gooey yellow “house cheese,” and the Luna has chorizo sausage, carmelized onions, spicy ranch, black olives, cilantro, more jalapenos, and more of that gooey cheese. The house cheese really is peculiar. It has a similar consistency to Cheese Whiz. There is no way in the universe that this should be any good on pizza, but it actually works surprisingly well in combination with the chewy crust and all the toppings.

Incidentally, doing a cursory bit of research for this writeup, I see that Malika of Atlanta Restaurant Blog recently enjoyed the same half-and-half split of a Santa Fe and a Luna. So there, three out of three food hobbyists agree that this is a good pie. The specialty pies are sort of their own little unique darlings, not quite like the pies at any other pizza place in town, but the basic single-topping slices that my daughter ordered have a more traditional taste, not unlike the dozens of New York-style varieties around town. These are not bad, but the specialty moons have a chewier texture, and the strange mix of the yellow cheese, the herbs and the seasoning brings out a more interesting flavor. The curious should go with one of those over slices, easily.

Marie enjoyed a nibble of one of my slices and pushed it away. “No more,” she said, her willpower dented but still mighty.

Blue Moon recently opened their fourth store in Sandy Springs, but the one we visited was the original on Windy Hill. Mandy and Kelvin Slater opened it in 2003 and have been slowly growing their concept, with other stores in Vinings and Buckhead. I like their “life less ordinary” philosophy, and they certainly inspire their servers and staff to go the extra mile. I enjoyed the experience so much that as we were leaving, I noticed R.E.M.’s “Pop Song 89” was playing and decided to bellow along to it. Well, that was in part because we had a good night out, our disagreeable afternoon salvaged by a good meal, and in part because I enjoy mortifying my daughter in public. The same teenage hormones that lead to silly pointing and gesturing and the constant reminder that we KNOW that we want whatever it is that we just said that we want result in it being almost comically easy to embarrass the poor child, but you can’t say that, as parents of teens, we haven’t earned that right.

Other blog posts about Blue Moon: