We had not been planning to make any out-of-town trips in July, although, happily, we’re about to head out on the road in a couple of days. One evening in July, the baby began his little shtick of bringing Marie one book after another to “read” and we started looking at the damage, in some cases very nearly trashcan-worthy, that he’s ladled out to his favorite books. He barely lets us finish turning the four or five board pages before going to get another, and gnaws and tears at them while we’re not looking. He has quite a little library, but none of it’s in good shape. His favorite book, incidentally, seems to be one called That’s Not My Puppy. A replacement is sought.

So Marie decided that he needed many more books, and since she had close to a hundred bucks in credit with McKay, where gently used kids’ books can be found very cheap, we decided to take a day trip back up that way. We had a general plan to stop by a couple of restaurants I’d been hoping to visit, and to give the baby a big treat, before doing some shopping, and then swinging by a place in Dalton and getting home before sunset. We got an aggravatingly late start – we left at eleven – but we still both made good time and had a good time. Chattanooga once again proved itself a simply terrific tourist destination. More on that front in the next chapter.

We got to town about 12.15 and stopped at Urban Stack for lunch. It’s just down the street and around the corner from the Chattanooga Choo-Choo, which is sort of a combination convention center, shopping arcade, and relic of the tourist culture that kept the city afloat, albeit on life support, until local business started thriving and the city roared back to life some years ago. Does that make sense? Twenty years ago, we all thought of the city as that place with the Choo-Choo and Rock City, and today, the city has a reputation as the city that routinely leaves larger metro areas in its dust.

Mike and Taylor Monen were already very well-known in Chattanooga for their popular restaurant Taco Mamacita, which we have not yet visited. From what I understand, this place seems similar to Atlanta’s Bone Garden Cantina or Nashville’s Mas Tacos Por Favor, bringing in a young and upbeat crowd with lively music, excellent service and traditional Mexican food done with a kick and a lot of flair. I’d like to try it sometime. Flush with that restaurant’s success, they opened a hamburger joint called Urban Stack in the spring of 2011. It instantly roared past so many established businesses straight into the city’s top ten in Urbanspoon, and it has remained in the Chattanooga “Talk of the Town” listing since it opened, suggesting that this is one of those very rare places where the hype is matched by quality. I was really looking forward to giving this a try. 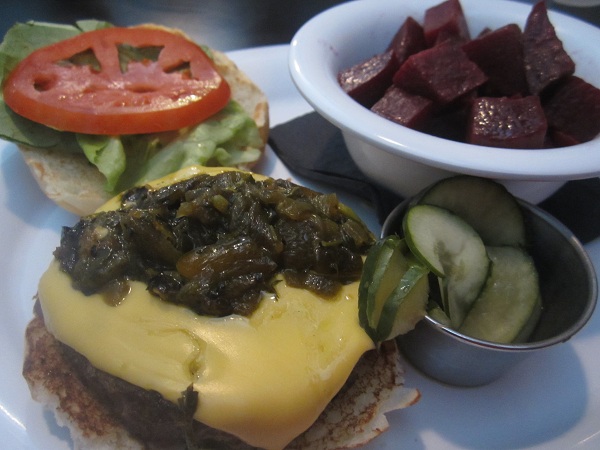 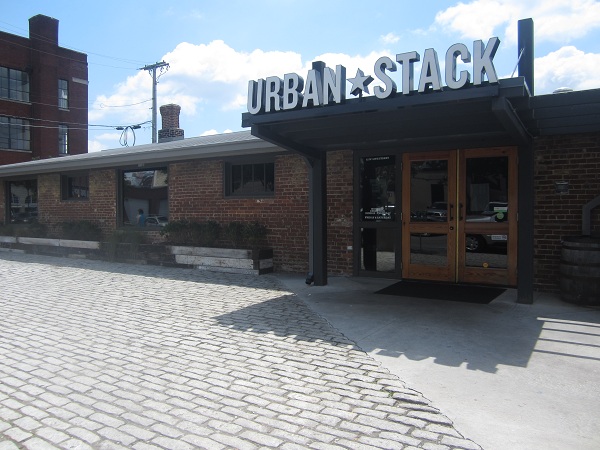 Like Farm Burger here in Atlanta, Urban Stack is proud to offer locally-raised and vegetarian-fed beef. The building is LEED-certified green and they contract with area farmers for their vegetables. It’s by no means a copy of Farm Burger, however. One of Urban Stack’s selling points is their selection of “manly drinks,” a list of bourbons longer than just about everybody else’s, combined. Plus, they have their own, winking, take on Chattanooga’s old railroad tourist culture by filling their space with signage from British railway stations. This is a very fun place to eat.

Marie and my daughter each ordered the basic “Big Cheese” from the menu, which is a single patty with the standard fixings and one of four cheeses. Marie had cheddar and the girlchild went with pimento. Perhaps surprisingly, loving pimento cheese as I do, I didn’t go for that myself. Instead, I wanted to try the New Mexico-styled green chili cheeseburger, which comes with roasted green chilies, yellow American cheese, pickled red onion, lettuce, tomato, vinegar mayo and yellow mustard. Having never been to New Mexico, I can’t vouch for its accuracy, but we all agreed that these were among the best burgers we’ve had in quite some time, incredibly flavorful and juicy.

Urban Stack can become a pricy meal, as the burgers – priced, for Angus beef, between seven and nine dollars, and a couple of dollars more for lamb or Wagyu – don’t come with sides. We splurged anyway. My daughter ordered sweet potato fries, which went very well with chipotle ketchup, and I had the Almost Pickled Beets. These were crunchy and wonderful and had just the slightest hint of vinegar. Marie went with the creamed corn, one of a small list of higher-priced ($5) “steakhouse sides.” They give you a darn decent-sized serving of corn for the extra money, and it’s really quite terrific. We were all very pleased and went on to our next destination in really high spirits. What we found next was another quite pleasant surprise, but more about that the next time, when I’ll gush again about what a nice city Chattanooga is.

Other blog posts about Urban Stack: