One day early this summer, one of those little recommendations on the right-hand side of Facebook actually proved useful. It suggested that I look at something called Pure Sodaworks, and I’m glad that I did. Last year, Matt and Tiffany Rogers and their friend Shawn Clouse opened a little storefront on Chattanooga’s River Street, and also put a cart together to go join the food trucks, wherever they roam. They’re making some very clever and very tasty soda concoctions from an old-fashioned jerk pump, squirting the syrups and mixing them with bursts of soda water. They use natural cane sugar along with “organic ingredients, locally sourced fruits, and focus on funky flavors,” and are in the process of attracting investors to get their bottling operation up and running.

We’ve mentioned in previous chapters about Chattanooga that the North Shore neighborhood seems really eclectic and fun, but we didn’t really know just how wonderful it was until this most recent trip. The plan had been to visit Urban Stack, as mentioned in the previous article, and then go get a glass of root beer or something and walk around what the map suggested was a small little place called Coolidge Park and enjoy a little exercise. Since we have only been just loosely aware of the main thoroughfare of the North Shore, Frazier Avenue – where Good Dog and Julie Darling Donuts are located – we had no idea that River Street, below it, has its own row of fun shops and restaurants facing the park, and that the park itself is a huge treat.

Parking on the River Street lot is a very reasonable dollar for two hours. We unpacked the stroller, glumly accepted that this was a lot warmer of a day than we were expecting, and went looking for Pure. It’s a very small storefront, with most of the space given over to a line of natural oils and bath soaps that the Rogers developed. We got to speak a little with Shawn, who was being the (soda) jerk at the time about their bottling operation, which is in its infancy. It sounds very promising, and it appears that they have several restaurants all around the southeast ready to order from them.

Most of their regular flavors were on offer at the time. You can get a big cup for $2.50 or buy a mug for $5 and come back for dollar refills. We selected Orange Basil, Lavender Mint and Honey Lime to start with, and then came back later for Root Beer # 4 and Hibiscus Lemon. Sadly, we were disappointed that their White Muscadine was not available; Marie and I both really enjoy grape soda and were looking forward to this. 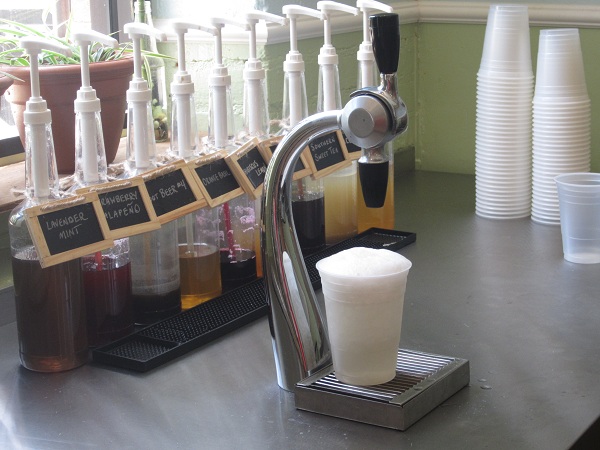 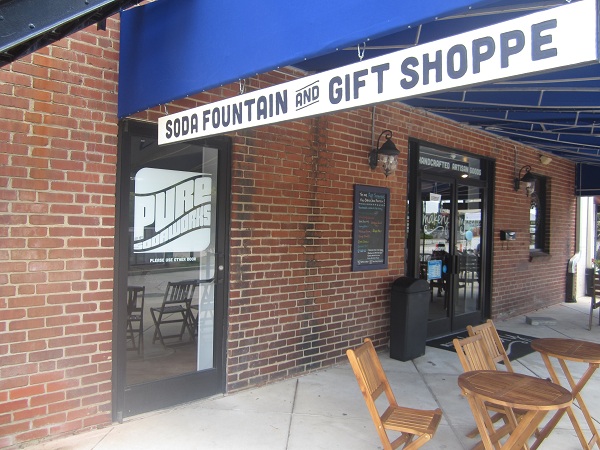 Our feelings were positive if not wildly enthusiastic. I love these guys’ attitude, and I really love the experimentation and mix of disparate flavors into new and very fun things, but my expectations were unrealistically high. Certainly their Orange Basil is something on the order of a hundred times better than anything that the Coca-Cola Company has sold in decades, but I still prefer a bottle of Nesbitt’s. The Root Beer # 4, named because it was their fourth attempt at tackling an incomplete recipe from the late 1800s, is also very tasty and superior to many in the business, but their version is nevertheless tepid compared to that amazing root beer that is crafted at the city’s Terminal Brewhouse. My favorite was the Hibiscus Lemon, which is quite unlike anything I’ve ever tried before. I was reminded of the reaction the first time that I ever tried rose water: it tastes like flowers smell.

We will certainly be back again – after all, we kept mugs – and look forward to trying more of their flavors. Actually, now that we’ve visited Coolidge Park and saw how much the baby enjoyed running around, we are hoping that the road will bring us back to Chattanooga very soon so that we may play again, but maybe plan a little better. Coolidge is a fantastic city park with lots of grass for the baby to run around, an indoor carousel (!) and a fountain where kids can get completely drenched. We have been leery about bringing him to Atlanta’s Centennial Olympic Park, because the fountains here could probably blind a toddler with their baby-unsafe force*. These are much more baby-friendly, even if the hot pavement did not agree with him. Once we realized that he and his big sister could play in the water, Marie returned to the car for a swim diaper. While she was gone, the baby ran around the grass, barefoot and happy, until he decided to explore all the noise of the laughing children and walked up on the concrete. He got about three steps, stopped, and started bawling, unable to understand why his feet suddenly hurt. He absolutely loved playing in the water, but he did so with hard-soled sandals. 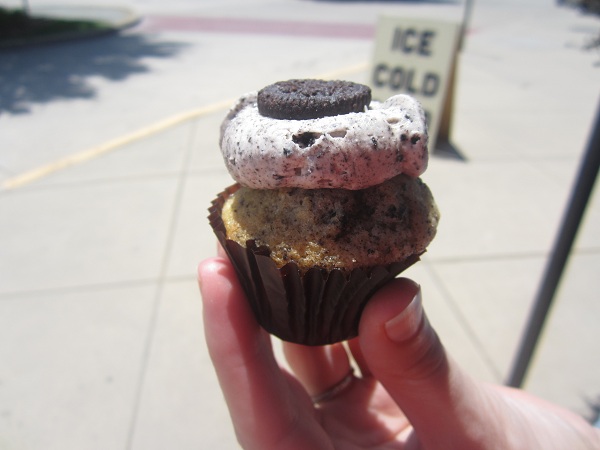 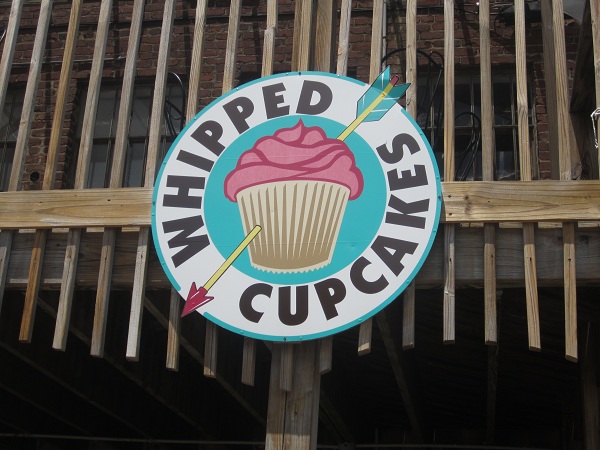 After the children got completely wet and the baby was worn out, we went back for our refills and stopped by Whipped Cupcakes, another River Street store that faces the park. We were intrigued by an ice cream company that’s also here, but the baby’s exhaustion meant that we elected to not visit the Creative Discovery Museum, and would be heading straight for our next meal, and so the ice cream would wait for another day. The little mini cupcakes at Whipped proved a perfectly small and simple snack. They’re moist and very flavorful and are not weighed down with frosting.

When we are next in Chattanooga, we have a better baby-friendly itinerary in mind. We will get an earlier start, have an early lunch, go to Creative Discovery for a couple of hours, then hop north for ice cream and a few new flavors of soda at Pure, let the baby wear himself out in the fountains, we’ll have towels, and then go get an early supper somewhere. It’s always good to plan ahead.

Other blog posts about Pure:

*Note: It is not our intention to turn ours into another Mommy Blog, but evolution in that direction is most likely unavoidable.