We got a very late start home from Nashville on Saturday afternoon. Part of the problem was that the baby had been cranky and fighting a cold most of the time. He wasn’t horrible, just clingy to Marie, and not a particularly fun guest. After lunch, he cheered up tremendously, and while the clock said we should’ve already left, we just didn’t want to strap the little stinker in the car when he was finally showing signs of his usual, playful self for Tory. So we let him run around the yard for several minutes, and he gave good hugs and kisses. He was also breaking Marie’s heart just a little. He’s calling me “Dada,” and her “Daddy.” This prompted some – I hope – good-natured grumbling from Marie. “I want to be Mommy,” she pouted, but it sure was funny watching him run across the length of Tory’s yard bellowing “DAH-DEEEEEEE” and jump into Marie’s arms.

When we finally waved our goodbyes and got on the road, we were about two hours behind schedule, which was troubling, because when we got to Chattanooga, I was hoping to make two stops at Pure Sodaworks on either side of our supper at Mojo Burrito, and Pure closes at the disagreeably early hour of seven on Saturdays. We made excellent time down I-24, drove downtown and across the bridge, and, to avoid parking or unpacking the baby, sent the teenage girlchild in with our refill mugs and $2. She came back out with sodas for herself and for me – she got lemon and I had ginger ale – and was all a-tremble because they’ve hired an allegedly attractive guy to work Saturdays. Poor kid had to fan herself down after three minutes in his presence.

There’s a quicker way to the closest Mojo Burrito than the one we took, but I didn’t know it at the time. We sped back around through downtown and hopped back on US-27 by the ballpark for a couple of miles across the river to the Red Bank exit, where one of Mojo Burrito’s three locations is doing huge Saturday evening business with their weekly 99-cent taco specials. Eve Williams started this restaurant ten years ago, and holy anna, is she ever doing it right. I completely and thoroughly love this place. 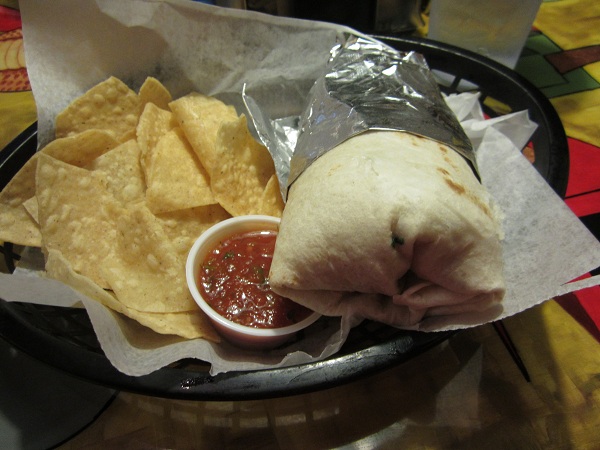 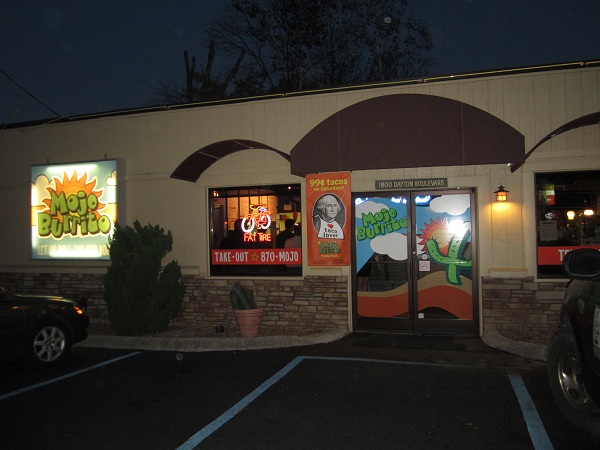 Mojo Burrito mixes the lovely, bohemian fun of the dearly missed Mean Bean with the quality of Atlanta’s Bell Street Burritos. They offer huge, very tasty creations made with fresh ingredients and a funky, upbeat style. Their prices are really nice – this might be the first burrito joint I’ve ever seen that doesn’t charge extra for guacamole – and their staff is having a ball, and they also have a really impressive collection of beers. I was really tempted by a bottle of Samuel Smith’s Organic Chocolate Stout, but decided that two sodas from Pure were calories enough.

Marie had a spinach quesadilla, and the girlchild enjoyed three chicken tacos, and I had the big Mojo burrito. Like Atlanta’s chain of Willy’s, they offer chicken as either marinated in lime (mild) or a spicier mix (fire). We all agreed that these were completely delicious, so many leagues superior to any burrito chain we’ve experienced, and would not object to another visit at all.

We left, and disaster nearly struck. Your humble narrator’s navigation skills completely failed him, and, with the clock ticking inexorably to seven and Pure’s closing, he completely got his left and his right confused and went the wrong way on Dayton Boulevard, wondering when the heck we were going to find the North Shore again. When we got to the actual town of Red Bank, I knew that I’d blown it. Fortunately, we’d passed a sign pointing toward north Chattanooga and Coolidge Park, and we returned to it and careened through that remarkable maze of neighborhoods, passing Aretha Frankenstein’s on Tremont, pulling back up in front of Pure just as they were getting ready to call it a night. So Marie got a soda, and the girlchild got to spend a couple more knee-knocking moments in the company of that cute boy, and I got a mug of their apple pie, which is just about the most delicious beverage that anybody, anywhere, has ever concocted.

Damnably, now that I look at Google Maps, I see that had we gone the correct way down Dayton, we would not only have enjoyed an awesome tunnel, but we would have seen Nikki’s Drive-In, a fantastic old place that has been on my wishlist for more than a year. But then we wouldn’t have enjoyed the crazy chase through that labyrinth of residential streets, speeding like we were in a Blake Edwards movie or something. Hopefully, though, the next time we stop by a Mojo Burrito – their East Brainerd store is very conveniently located off I-75 on the east side of town for anybody going to McKay Books or north to Knoxville – there won’t be any madcap racing involved.