It was a very silly set of circumstances that led us to Puckett’s. Tory first suggested it when my daughter asked whether we could get some fried chicken in Nashville, only not, she underlined, the crazy hot lava death kind that I enjoy so much. I mentioned that to Tory and she said that Puckett’s would work for us. Unfortunately, they were closed for a private party on Friday evening, which is how we ended up at Tazza instead. Then at some point, my daughter, mercurial as ever, decided that she didn’t want fried, or any kind of chicken whatever, at any time in her life ever again. She lasted about a week; Marie’s chicken alfredo pasta was enough to shake the girlchild out of her reverie.

The following day, after we spent the morning shopping at McKay, Marie suggested we find some place with country vegetables and sweet tea. We first went to the very popular Monell’s, but unfortunately, they wouldn’t begin serving lunch until one, a good hour and a half away. So we ended up at Puckett’s after all, where the girlchild helped herself to a heaping bowl of chili.

Puckett’s is mighty touristy. The original location is in Leiper’s Fork, and opened in the 1950s as a combination general store and country kitchen. The Puckett family ran it until the 1990s, when it was purchased by a longtime grocer named Andy Marshall, and he in turn sold it to the present owners, Rob and Shanel Robinson in 2008. While Marshall was in charge, he opened stores in Franklin and in downtown Nashville which he and his team still run. The Nashville store is principally a restaurant, bar, and evening music venue, but they still carry groceries and paper towels, and bottles of their popular barbecue sauce. 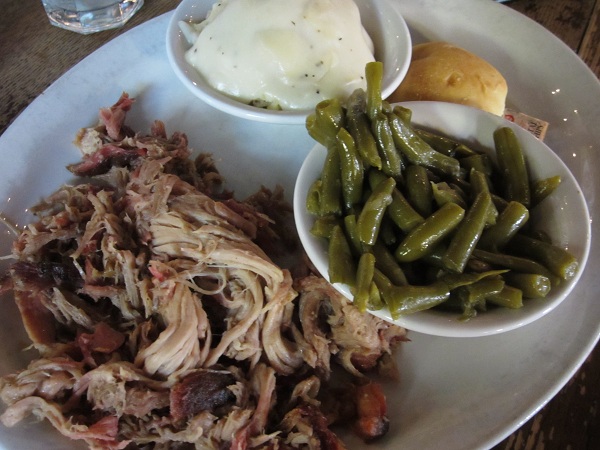 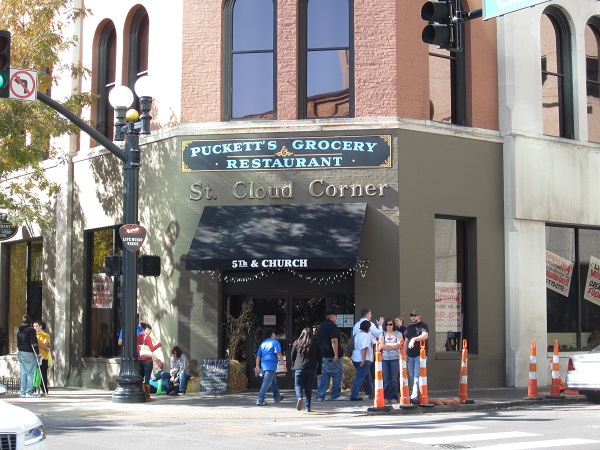 While the girlchild confronted her huge bowl of chili, Tory and I tackled her favorite lunchtime treat, the barbecued pork quesadillas. These were a regular entree since the downtown store opened two years ago, and since Tory eats here about twice a month, she’s had more than a few of these. A few months ago, they rejigged the menu and moved the quesadillas to the appetizers, causing our friend a painful shock to the system before a server assured her everything she wanted was still available.

Marie had a more traditional barbecue plate, but shook up her usual sides, since this place has a much deeper menu than many barbecue-only restaurants. She had green beans and mashed potatoes, and the baby enjoyed sharing them. The barbecue is pretty good here, but it’s probably a better overall experience during the week, when guests don’t have the very long wait that weekenders will. It’s touristy, but tasty.

Other blog posts about Puckett’s: