Since we don’t live in Nashville, and since that city has a very active blogging community of its own, it always surprises me when we make it to a restaurant and give it a writeup before anybody else seems to have. Then again, what reputation Tazza has tends to be negative. It isn’t a place that has made much impact on hobbyists, and the user reviews at Yelp and Urbanspoon are fairly tepid.

One comparison keeps coming up in online reviews of this place, and that’s Cheesecake Factory. I think that this place might have the most absurdly overpacked menu that I have ever seen, even bettering that chain’s comically large one. Thirty different appetizers. Fifty-two different pasta dishes. A carry-out menu with print so small that a magnifying lens is necessary to read it. There is no way in creation that I’m prepared to believe that any restaurant can make so many wildly different things and do very many of them well. Fortunately, we had a really terrific server, an eccentric and well-dressed fellow named Tim, who was honest about a place or two where Tazza was not really that reliable, and steered us away from some of the pasta dishes that he didn’t enjoy. 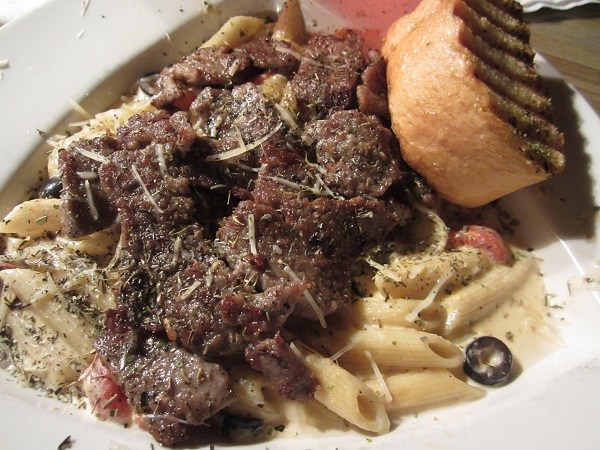 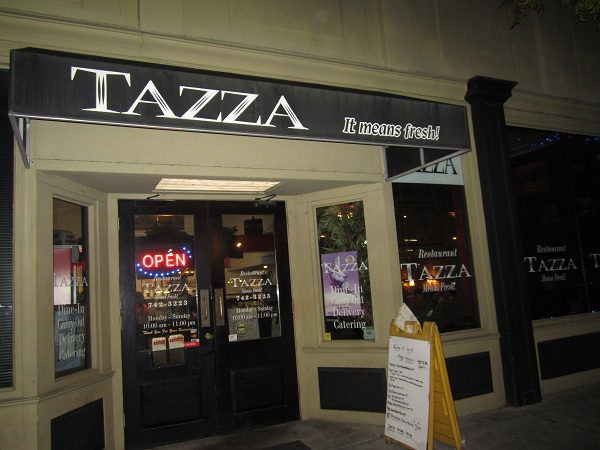 Marie and the baby, who had been run ragged and wasn’t happy anymore, stayed back at Tory’s house, while my daughter and I rode with our host downtown to try this place. Tory works nearby and has ordered delivery from Tazza a few times, and her opinion means a fair amount more than anybody on the internet anyway. She’s never once steered us wrong.

I did have to ask both Tim and a woman in the kitchen what in the world was with this ridiculous menu. The restaurant, owned and managed by a fellow named Botir Sta, opened in 2001, and Mr. Sta really just wanted to have a place where guests could try everything, and large parties wouldn’t have trouble accommodating picky eaters. So, it’s all here, from pastas to burgers to calzones to steaks to nachos to chicken fried chicken, with forty-eleven varieties of each. They don’t specialize in anything; I’m not sure that they could.

Fortunately, I rolled the dice well and came up sevens with the Greek lamb pasta, served with olives and red peppers in a mildly spicy cream sauce. It was that or one of about nine other possibilities, and it was very good, much more so than I expected. I ate half and took the rest back to Marie, who enjoyed it. My daughter and Tory each also had pasta dishes that were perfectly fine, but what they enjoyed the most was dessert.

In perhaps the biggest surprise of the evening, looking back, Tazza doesn’t have quite as many desserts as you’d expect from a menu this silly, only (heh, only) eighteen. The ladies shared a Milky Way Mousse Cake, with two layers of white chocolate and a shell of dark, with lots of caramel oozing everywhere. They both completely loved it.

Looking back, and with a more objective eye, I think that we were all pretty lucky, though. Jack-of-all-trades restaurants simply can’t be masters of all, or even very many of them. Should the road take you to Tazza, I hope that you find Tim as your server. Lower your preconceived notions, follow his suggestions, and you may be pleasantly surprised, as I was.