I only had one particular restaurant in mind for our trip to Nashville, and decided that when we got to town, we’d let our friend Tory pick where we ate, but only after we stopped by The Pharmacy Burger Parlor and Beer Garden. I had read about The Pharmacy, a very trendy and popular burger joint and biergarten – so trendy that the predictable backlash came almost instantly – in East Nashville, and, on our last visit to town, when we stopped by Mas Tacos Por Favor to enjoy some of their Friday fish tacos, we saw the very long line of people waiting to get in. I figured we’d wait a little while, for the fad to cool, and stop by during some off-peak time to try the burgers and see what the fuss was about. Then I read a little more closely and learned they make their own sodas from an old-fashioned pump. This suddenly became very promising.

There’s some wiggle room here in the definition, but I think that a phosphate soda, in the modern day, is a hand-mixed, fruit-flavored soda from a jerk pump that doesn’t use artificial colors or sweeteners. These lost popularity when national brands emerged. It’s a fabulous hook to hang a design around, and The Pharmacy’s interior, with wood paneling, old apothecary bottles, prescription advertising, chrome and mirrors in the corner around the bar and counter, is deceptively simple and relaxing. They don’t overdo it here; a hint of 1910s-era grandiose lettering in their logo and the bare minimum of what’s necessary to evoke the right spirit is all that’s used. Should we ever give out awards for restaurant design, this place would be a contender. Happily, the food and drinks are terrific as well.

This is not my favorite burger in Nashville. That’s still held by the excellent Pied Piper Eatery in nearby Inglewood, although, in a pleasant coincidence, the Pharmacy gets their ice cream from the Pied Piper Creamery. But the Pharmacy’s basic burger is nevertheless a really good one, made from locally-sourced meat, and paired with some fabulous hand-cut fries. They also offer tater tots, sweet potato fries, and two different recipes for potato salad, which makes some sense, as they’re almost as well known for their German sausages, which Marie tried, as for their burgers. 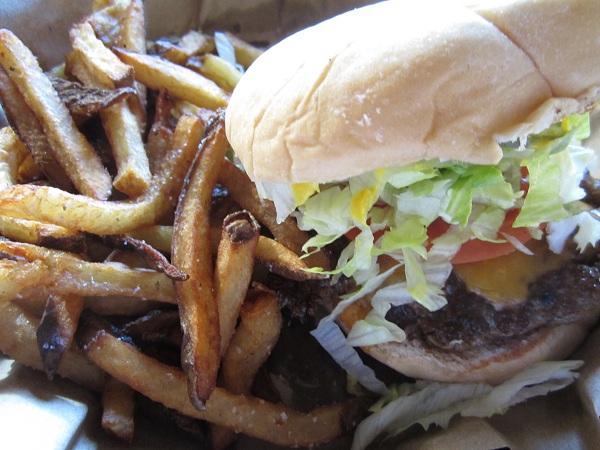 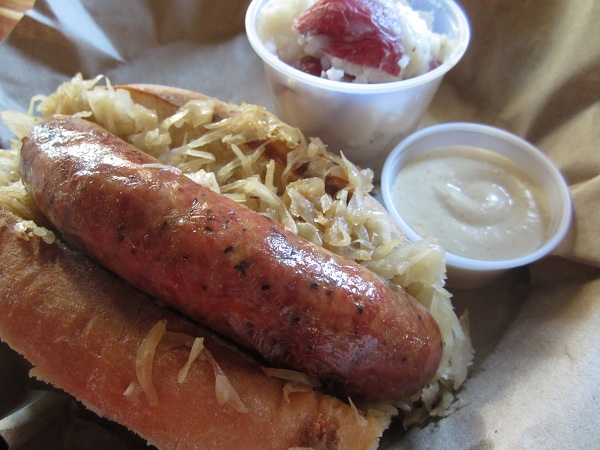 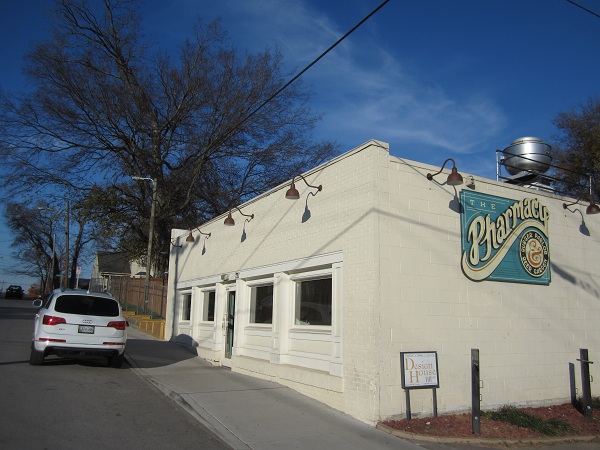 Celebrating the popularity of their Wurstchen, the Pharmacy has picked up a slogan as “The Wurst-Burger Joint in Town.” Marie delighted in the pun – she does that – and ordered a simple bratwurst. It’s served on a locally-baked roll with sauerkraut and a little cup of mustard. Friends, if you’re sticking with a burger and fries, ask for a cup of this beer mustard, because it is a finer fry dip than any you can imagine. Other sausages on the menu include kielbasa, bayernwurst, jagerwurst, and an is-this-for-real currywurst, smothered in a spicy curried tomato sauce. If I hadn’t been looking forward to a burger since March, I’d have ordered that.

But I’d also been looking forward to the sodas all that time, and they didn’t disappoint. Now, if you don’t love great sodas the way that we do, the Pharmacy has an excellent reputation for its eye-popping list of small craft beers in bottles or draft, and a huge outdoor patio that’s been successfully converted to a proper biergarten. If this place didn’t have such amazing sodas, I’m confident that I could find quite a few choices here. But the sodas are simply too tasty to waste time and calories on beer. Lacking any artificial colors, they all come out crystal clear. A guest’s first glass is $2.50, and each additional choice, or refill, is a dollar. They presently make chocolate, vanilla, Maraschino cherry, ginger, Kentucky mint, and lemon. We tried all but the chocolate and enjoyed them all thoroughly. Tory was most taken by the mint, and Marie left not certain but thinking that the vanilla might have been the best soda that she’d ever had, anywhere, and our daughter also liked it best. I couldn’t decide which was my favorite. Possibly the mint and maybe the lemon.

We finished up here and went shopping. I wasn’t supposed to buy anything, but I did, foolishly. We happened upon The Great Escape in Madison actually having one of their deep discount sales on the same weekend that we were in town. I didn’t buy much, but, after complaining for ten years that they always have their sale the week after we’re in Tennessee, damned if I was leaving without a cheap book. Tory found two issues of a recent series that she wanted here, and we drove a few miles up the road to Rick’s Comic City, where she found the other two that she needed. We also found the next morning’s breakfast at the Sweet ‘n Sassy Bakery. 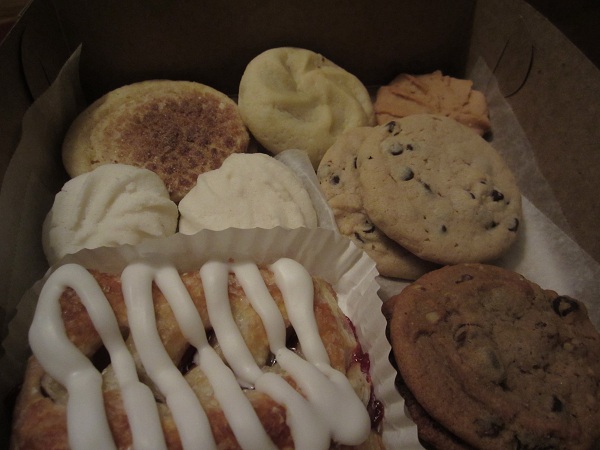 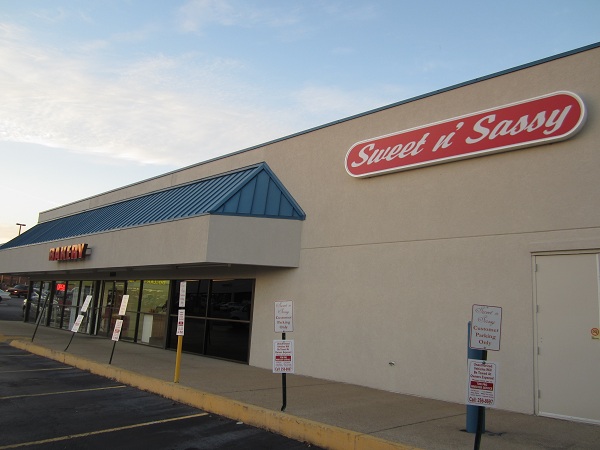 This place has been in business for forty years, specializing in wedding cakes and other big events. Marie just picked up a box of assorted cookies. Everything that we enjoyed the next day was really good. My favorite was the meltaway, a buttery little thing that just disintegrates in your mouth. I’d never heard of meltaways before, although I’ve probably gobbled about two dozen at some wedding or family shindig or other without questioning what they were called, but I found a good recipe at a blog called The Royal Cook. These don’t look much like Sweet ‘n Sassy’s, but I’m keen for Marie to give it a try one day and see how they taste.

But anyway, we spent the afternoon shopping and playing with the baby, who was not in the best of moods, and putting a stop to some dumb Facebook drama that our daughter started, and, in time, thought about what we might get for supper. More on that in the next chapter.

Other blog posts about The Pharmacy: