When it’s feasible, I like to do a little bit of advance reading about a restaurant before we visit. The best way to do that, once we’ve picked a place, is to pop by Urbanspoon and read the blogger reviews. Once in a while, though, we run into a joint that seems untouched, and I don’t really have the time or the inclination to go a-Googlin’ for blogs that don’t yet affiliate themselves with that service. Once in a while, in other words, I deprive myself of an experience that sounds really good.

We had wanted to go back to Nashville and visit our friend Tory, who was wanting some baby time, and a couple of weeks ago was the most convenient time for her. The last time we went to Nashville, this past spring, we took the incredibly long way, up US-41, and this trip was a little less harried than that. We got a very early start, gave the toddler a mercy break at the rest area on I-24 at Nickajack Lake, and made it to Murfreesboro around 10.30, not long after their children’s museum, Discovery Center at Murfree Spring, opened for the day.

Whenever we take a road trip with the toddler, we try to schedule a stop at a children’s museum along the way. I cannot recommend this highly enough. If you have a child between one and seven, and you do any traveling, giving your kid an hour’s mercy break to run around, playing and exploring in a safe environment, is, flat out, the best thing in the world you can do. We have a membership with The Children’s Museum of Atlanta, which gives us reciprocal privileges and, for now*, free admission at something like 180 other children’s museums. Our travels have already taken us for running-around breaks at the museums in Chattanooga and Memphis, and we’ll be visiting as many as four more in a big trip in December.

I won’t claim that the Discovery Center at Murfree Spring is our favorite so far, but the toddler is hardly in a position to be critical; he just wanted to run around and climb and fall over strange shapes and slides, and hide in big artificial trees. He had a blast. This place even has an outdoor wetlands exhibit that held the teenage girlchild’s attention for a while, and a two-and-a-half story superslide that kept her busy when she came inside again.

For lunch, I wanted to find some barbecue – we are nowhere near even close to digging into what we can find in middle Tennessee – that was reasonably close to Discovery Center, so that we could get back to the highway and get on to Nashville without much delay. The best bet seemed to be Slick Pig, but I had no idea what to expect. What we found was among the busiest and most crowded barbecue joints that we’ve ever visited. 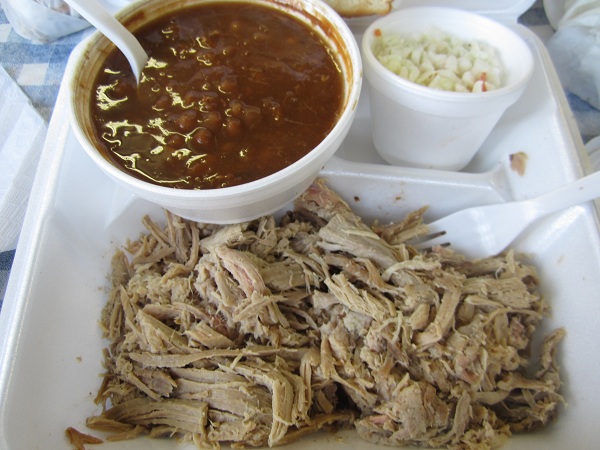 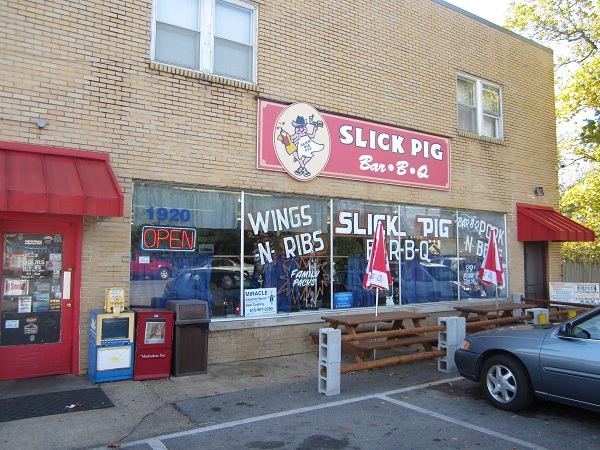 We found Slick Pig after they’d been open for only about 45 minutes, with no more parking – we had to pull into the grass field behind the restaurant and were thankful that it hadn’t rained lately – and a line out the door and only one table free after we’d placed our order. This is a hugely popular place, and proud supporters of the Blue Raiders of MTSU, with royal blue, white and silver as far as the eye can see. After MTSU came to Atlanta and walloped the Yellow Jackets so beautifully last month, I had no objection whatever to spending a meal in the company of their fans and faithful.

Jerry Robinson opened Slick Pig in 1995. He was only 21 at the time, but learned the barbecue trade as a teenager here in the Atlanta suburbs. He used to work at Speedi-Pig, down in Fayetteville. Had I known that at the time, I might have ordered their Brunswick stew, to see whether Robinson has been able to replicate the astonishingly good stuff that you can order down there.

Then again, had I known anything about this place, I would have ordered their naked smoked wings. While their chopped pork was certainly good – perhaps a little dry, but, especially in the wake of all of that “steam tray” barbecue that I sampled in South Carolina a few weeks previously, I liked it just fine that way – it is their wings that people rave about the most. Slow smoked with the same attention as the pork, beef, or ribs, these have a terrific reputation. Tragically, my daughter initially wanted some wings, and, at the last minute, changed her mind and asked for some peach cobbler instead. Then she ended up not enjoying it. I split my plate with her. The sauces were mild or hot versions of a thin, brown, vinegar-pepper mix. Upon reflection, they were a little similar to Speedi-Pig’s, and went very well with the meat.

Marie had a sandwich, and enjoyed it, and strapped a bib on the baby to feed him a side of white beans. No baby has ever enjoyed food so much, nor made such a mess.

After we got home and I looked around for a few links (listed below) for our visitors to read, I started lamenting our failure to try those wings. We might make another trip to Nashville in the spring of next year, which should mean another mercy break at Discovery Center, and, while we’ll probably want to sample another restaurant in the area, we could probably make a stop for some wings. Provided, of course, that we can find a place to park.

Other blog posts about Slick Pig: