I remember our first trip to Southern Pit very well. It was May 28, 2009, and while we weren’t blogging yet, I was nevertheless using Roadfood.com to find new and fun places to eat on our way on our trips down to Saint Simons Island and back. On that trip, Marie and the kids and I stopped in for lunch on our way to go get married, which is why it’s fairly easy to remember the date. I’m good about remembering the day we got hitched (the 30th); Marie’s birthday, slightly less so, on account of her decision to never enter that date anyplace like Facebook where I get a cheat friendly reminder. We had a huge lunch that day, and Marie capped things off with some delicious blackberry cobbler. I later waxed hyperbolic about how awesome this place was, and returned a few months later with Matt and our friend Kevin, shortly before he flew back out to California to resume work in academia.

As we’re entering the last few weeks of pregnancy, I struck a compromise between our twin desires to get out and drive and yet not stray too far from home. I’ve worked up a pair of short afternoon barbecue tours for Marie and I to enjoy small road trips without exhausting her. The first one is what I termed the “West Central Georgia Tour,” and was originally intended to bring us to two of the remaining stops on our goal of all the Roadfood.com-reviewed sites in the state: Southern Pit and Melear’s Barbecue in Fayetteville. Unfortunately, or not, considering its low reputation of late, Melear’s closed in January. So the revised plan saw us driving down I-75 to Griffin, then going north and west to Fayetteville for Speedi-Pig, and then further west to Sprayberry’s in Newnan before returning north on I-85. By chance, and not design, all three of the places we visited are reviewed on the wonderfully fun Chopped Onion, one of my favorite sites for finding barbecue joints and hot dog stands.

Should any of my Atlanta-based readers be interested in retracing our (planned) steps and doing their own simple tour as a day trip, I’d like to point out that you can also sample a McDonough barbecue restaurant called O.B.’s very easily on this path; it’s on the same exit (218) off I-75 that you take to go to Griffin. The same plan we took, with minor detours, should also take you near Uncle Frank’s in Fayetteville, Cafe Pig in Peachtree City, and Westside in Newnan. We haven’t visited any of these places yet, but you might could make a really full day of it if you’d like. Let me know how it goes for you!

By chance, the road that we ended up taking sped us past yet another place that I’d like to try one day: Dean’s Barbecue in Jonesboro. See, we had planned to drive down to exit 218 and shoot across 20 to Southern Pit, but after having dealt with insane construction traffic in north Atlanta on I-75, we were in no mood to sit and wait for all the spring break congestion that started building at exit 230. We could have sat bumper-to-bumper crawling for twelve miles, but I trusted our navigation instincts and we got off at 228 and found US 41 that way, which took us right past Dean’s. Some other day, perhaps. 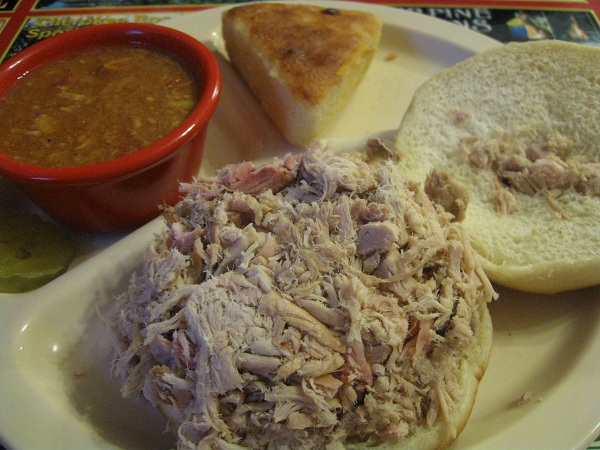 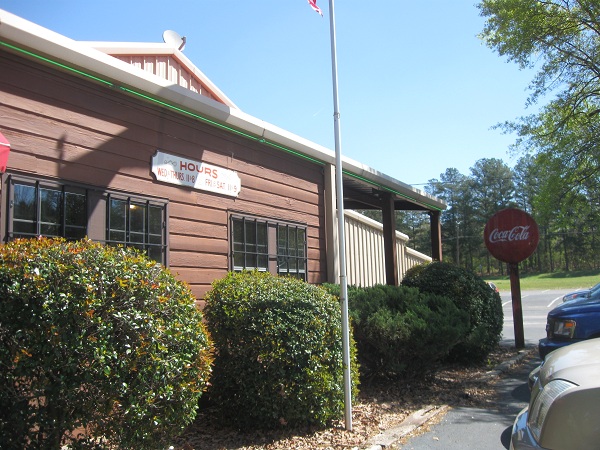 We finally got to Southern Pit about forty minutes behind schedule. The place is not really easy to find; it isn’t signed very well, but if you are driving south, keep looking to your left and you should see it through the trees, its small sign dwarfed by the ones for Georgia Lawn Equipment and Toro brand mowers. Then make a U-turn across the divided highway when you get a chance.

The chopped pork here is not very dry and not especially smoky, but it is nice and pink and packed with flavor. Readers who have been following my recent series of memory issues will be pleased to hear that I ordered my sandwiches without any sauce at each business we visited, so that I could get a better taste for the meat before smothering it. They have a single sauce at Southern Pit: it’s a nice, brown tomato and vinegar mix, and is very sour and tangy.

I thought the Brunswick stew was pretty good, but was extremely pleased with the cracklin’ cornbread. I had been a little disappointed last year when I went to Harold’s and could hardly find a crackle anywhere in the bread, but this was just popping with them and it complemented the stew very well.

Sadly, I have to take a little issue with the desserts on offer. We were surprised to see blackberry cobbler available this early in the season. Marie asked about it and our server – points for truth – confirmed that they get the blackberries from Sysco. (“He said the S Word,” I whispered later.) The strawberry cream pie, he assured us, was made fresh in house, and this turned out to be quite good. Marie had a slice of that in lieu of a side for her chopped pork sandwich, and we were happy and pleased as we got on the road for stop number two.

The second visit was in Fayetteville, a town that neither of us had ever visited before. If it wasn’t painfully obvious from earlier chapters, when I’ve lived in the Atlanta area (which would be all but twelve years of my life) I’ve always been a resident of the northern ‘burbs: Smyrna, Alpharetta and Marietta. I just never got down this way very much.

A manager at Southern Pit had given us better directions to get over to Georgia-92 – just take Birdie Road west and cut off a huge corner, enjoying some very pretty land and houses along the way – but he could not have prepared us for an unexpected detour. An accident or fire shut down this highway completely, and a Fayette County sheriff sent us on a left turn. We shrugged and hoped for the best and eventually joined Georgia 85, which, happily, not only hooks up with 92 just outside the Fayetteville city limits, it is the very road – Glynn Street – that we were looking for. Unfortunately, it is marked amazingly poorly, and we did not know that it was Glynn Street until we drove right past Speedi-Pig and had to turn around. 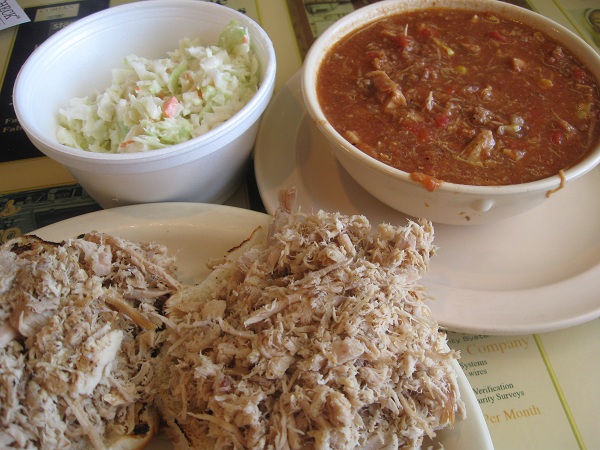 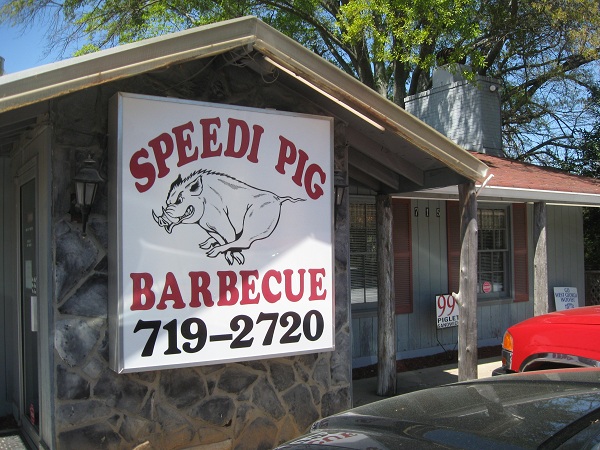 My buddy Rex had told me that his girlfriend swears by Speedi-Pig’s Brunswick stew. It is similarly singled out by both Chopped Onion and another of my favorite barbecue blogs, the frustratingly-on-hiatus 3rd Degree Berns. None of these good people come close to telling you the real truth: this stew is amazing, easily just about the best in Georgia. It’s a toss-up between this and Harold’s, flatly. You will definitely want a large order of this stuff.

The chopped pork is diced pretty finely and, while it has a nice smoky taste to it, I did not like it nearly as much as I did Southern Pit’s meat. On the other hand, the price is just amazing. For 99 cents, you get a really good portion of meat on a “piglet” sandwich. I ordered two, but really only needed one. They have two sauces on the table, mild and hot varieties of a vinegar-tomato-pepper mix, and apparently they keep a much more potent hot sauce behind the counter, but I did not think to try it. The hot sauce wasn’t that much different from the mild, honestly. The barbecue is not at all bad here, and neither is the slaw – mayo-based and easy on the dressing – but the stew is the selling point. Run, don’t walk, to Fayetteville, friends.

I noticed that a party of four was asking one of the servers what had become of Melear’s. I expect that’s going to be a question the staff will be answering for months to come. It’s always a shame to see a much-loved, very old restaurant close its doors, even if its reviews had been pretty awful lately, and especially before I was able to try it.

We didn’t linger at either restaurant, but were still a little behind schedule as we got back on the road and headed west. More about that in the next chapter.

Other blog posts about Southern Pit:

Other blog posts about Speedi-Pig:

4 thoughts on “Classic Que in Griffin and Fayetteville GA”