I stand by something not entirely professional that I said once that got started on that old Geocities barbecue page that I used to maintain. John Kessler is the restaurant writer for The Atlanta Journal-Constitution, and many years ago, he sparked an e-mail issue that went on for several months with my readers and Google-surfers. He’d given a rave review to a barbecue place that I then visited with stars in my eyes, ready for the best meal of my life, only to find wet crock pot bilge on my plate. So I related my displeasure on that page – this would have been sometime in 2002 – and enjoyed correspondence with barbecue fans on the subject for months. One older gentleman compared the restaurant in question to the Iraqi army, a point that still tickles me. Everybody hated this place.

I figure that if I was getting that much positive feedback for a crappy “hey, I learned HTML from a book in 1997” Geocities page for disagreeing with the food critic, then Mr. Kessler must have been buried in hate mail. So a few months later, he had a fantastic new column up, wherein he and some buddies took an awesome barbecue tour around the region to try out all the restaurants that all his feedback told him was better than this place in question. It was a really good column, and I say that even though they went to Old MacDonald in Buford, which I love absolutely and am long past due to revisit, and didn’t like it. (Having said that, I looked up Old MacDonald on Urbanspoon and was really stunned by its low rating and poor reviews. Apparently there has been a change of ownership and it has plummeted downhill…? Well, that’s not encouraging.)

Anyway, what absolutely baffled and upset me was this: these Atlanta Journal-Constitution writers went down to Newnan to eat at Sprayberry’s Barbecue and did not like it. This place was Lewis Grizzard’s favorite restaurant. He ate there once a month. When the beloved writer passed, the restaurant memorialized him by bundling his favorite meal together on the menu as The Lewis Grizzard Special. And here was a negative, dismissive review of Grizzard’s favorite meal in the pages of the AJC. I never thought I’d live to see the day.

Once upon a time, when Atlanta was newly called “Hotlanta,” Maynard Jackson was mayor and the most amazing event on the area’s calendar was an inner tube race -slash – bacchanalia down the Chattahoochee past the old swingers’ apartments that drowned three drunks annually, Lewis Grizzard and Ron Hudspeth ruled that newspaper. Those were awesome days. You want to see some fun newspaper writing, go dig up some evening papers from the late seventies, where those two would drink their weight in bourbon, show up sauced after the staff had gone home and crank out some incredibly funny tale of some crackpot kinfolk in a one-horse town who once had a recipe for black-eyed peas that would cure cancer, when applied, in a poulice, to the back of your knee before your dog died and your pigtailed cousin’s skirts got too short. The AJC was a freaking wonderful paper then, with these two redneck drunks ranting about whatever the hell misty-eyed nostalgic Southern weirdness crossed their minds, and then Celestine Sibley saying much the same thing, only sober, the next section over.

To see this same newspaper then dismiss this great drunk’s favorite restaurant, well, it just made a fellow utter something a little unprofessional. 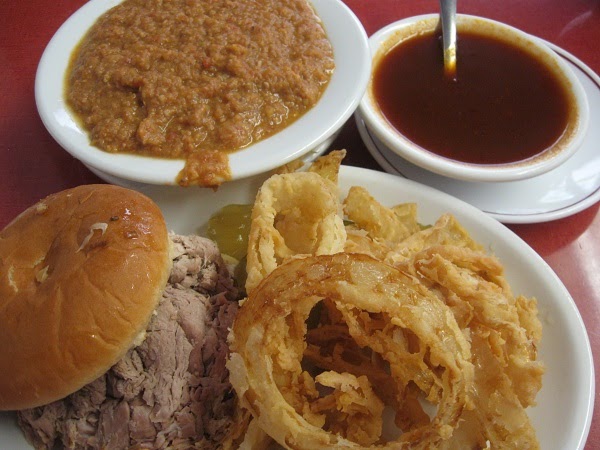 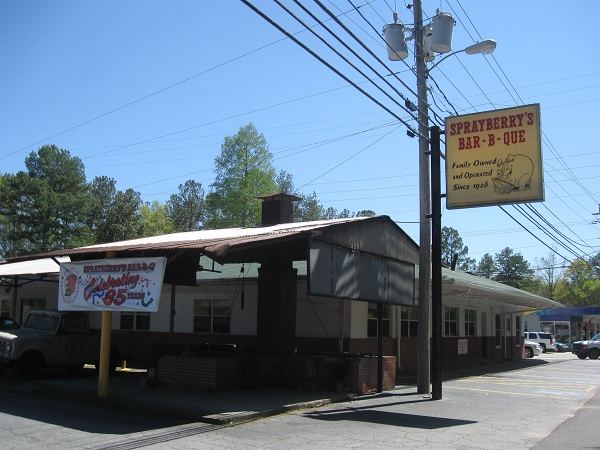 Sprayberry’s was the last stop on the little barbecue tour that Marie and I took a week ago, but it is a place that I’ve visited every couple of years for ages. They have two locations, including a large, interstate-friendly one right off the I-85 Newnan exit, but the one to see is the building further into town. Sprayberry’s opened in 1926 and has been attracting the attention of food writers for decades. Apart from Grizzard, whose love of the place was legendary, and spilled out into a good dozen of his columns, Roadfood’s Jane and Michael Stern wrote about the restaurant in 1990 for their syndicated Taste of America feature. Strangely, however, Sprayberry’s is not currently included among the Georgia places reviewed on their current site. I wonder why.

Now it does have a reputation as being a pretty expensive place for barbecue, especially when compared with Speedi-Pig over in Fayetteville. Here, Grizzard’s regular meal of a pulled pork sandwich, onion rings and stew will run you ten bucks before a drink and tip. Yikes! It’s all very good, but the sticker shock can be rough.

I really enjoyed eating here with my dad once. In 2006, I was out of work for a few months when the insurance company that I was with closed. Dad was beginning to have to slow down and not drive long distances, but he had a new potential customer down in Newnan, so, since I wasn’t doing anything, he asked me to drive him here to meet him. My daughter and I dropped him off with his client that morning and picked him up two hours later and we had lunch at the exit ramp location. I remember confusing my daughter with the unusual drinks on the menu. A holdover from the days before fountain fruit sodas were very common, you can get an “orange special,” which I believe is two parts orange soda to one part grape, and a “grape special,” which is two parts grape soda to one part orange. Of course, you could make this or ask for this anywhere, but only Sprayberry’s puts it on the menu.

That was a good day. I especially liked the part where Dad picked up the check.

On our own dimes, Marie and I split a Grizzard special. The pulled pork – a little smoky and very moist – is served without sauce. That comes in a bowl, like they serve it at Wallace Barbecue in Austell. The sauce is not quite the usual tomato-vinegar mix you get in the region. It is a little sweeter than you would expect from a vinegar sauce, and thinner. Guests can either spoon the sauce over the meat, or dip chunks of it in the bowl. The onion rings are also very sweet, and made with a buttermilk batter. They are among my very favorites. The stew, more “Virginia Brunswick” than “Georgia Brunswick,” is thick enough to be eaten with a fork. It’s quite different from the amazing stuff they offer at Speedi-Pig, but very agreeable all the same. Oh, and they serve it with a bowl of really amazing sweet pickles. Mention how much you like them and they might just bring you another bowl of ’em.

I’ve always really liked Sprayberry’s. True, not all of the food here is drop-dead amazing, but it’s all presented with so much care and love, and considering that most of the staff seems to be high school kids, I remain very pleasantly surprised by just how well they coach and train their employees. I get a kick out of the throwback feel of the menu, which, apart from the silly sodas, includes such things as congealed salad and an “aristocratic” hamburger, which has a salad and French dressing atop the patty. You can also get that very old Southern Saturday night classic, a hamburger steak smothered in onions. In fact, the old-fashioned, upscale feel to the menu here puts Sprayberry’s more in line with, say, Atlanta’s Colonnade than most of the barbecue shacks that I like the most. It adds up to a very unique experience at a place that’s been doing it right for 85 years.

Other blog posts about Sprayberry’s: