Understanding the difference between a geographic divide and a cultural one might be the key to understanding North Carolina barbecue a little better. We’ll be coming up soon on our fourth anniversary of blogging and we have barely given the surface of barbecue in the Tarheel State a gentle rub, much less scratched it. I understand, for example, that the traditions of eastern North Carolina are not followed in the Lexington region, which, on the map, sure does look like the middle of the state to me, and not “western” North Carolina. I’m perhaps doing it wrong, dividing states into three geographic models, when the Tarheel traditionalists seem to split things half-and-half. Earlier this year, The Arrogant Swine penned a quite harsh criticism (12/15: link dead) of the western NC tradition of sliced pork. Since the Swine is a very open-minded blog, I’m not certain what surprised me more: the deep dislike espoused in the article, or the label. I’d have figured western NC as only the area on the left side of I-77, and not what looks to be the geographic center of the state.

But we have lacked the resources thus far to make a committed investigation into North Carolina, and there is quite a lot about that state and it’s barbecue culture that I only know from generalizations, and not first-hand experiences and interviews. Hopefully, we will make a long overdue trip to the towns and the restaurants of the Piedmont Triad and the Research Triangle in the spring of 2014 and learn a little something for ourselves.

Now, there’s no arguing that Herb’s Pit BBQ, which opened in 1982, is the westernmost barbecue restaurant in the state, about fifteen miles this side of Murphy. It’s the furthest afield of all the stops on the NCBS Historic Barbecue Trail, almost 200 miles away from the next stop, the celebrated Bridges Barbecue Lodge in Shelby, which I would love to visit. Herb’s is also the closest restaurant on this trail to us in the Atlanta ‘burbs, only about two hours away. Since North Carolina is such a deceptively gigantic state – US-64, from the Tennessee border, works its way with minimal kinks through Hendersonville, Statesville, Lexington, and Raleigh, across Roanoke Island to Nags Head, more than 500 miles away – starting quite small has always been a given for us.

But the surprising thing is learning just how little barbecue there seems to be in actual-geographic western North Carolina. The small Rib Country chain has two of its four stores in Murphy, but if you don’t want to try Herb’s or Rib Country, you pretty much have to come back to Georgia to get something to eat. That, or drive fifty miles east to Franklin.

One Saturday earlier this month, we all went up I-575 to look at the fall colors – we were too early – buy some fresh apples – we were right on time – and sample some more barbecue. I picked Herb’s, and we drove past Mercier Orchards, and through the twin towns of McCaysville and Copperhill to get there. When we woke the girlchild in Herb’s parking lot at 11 am and told her that she’d tripped over both the Tennessee and North Carolina state lines*, she thought we were lying. It is a curious little drive that only leaves you in Tennessee for about ten minutes, but lots of people in this region come to Copperhill and Ducktown to buy fireworks. There’s a convenience store right at the foot of a public school’s driveway here, selling rockets and missiles. It looks for all the world like the Copperhill Junior High and Fireworks Stand. 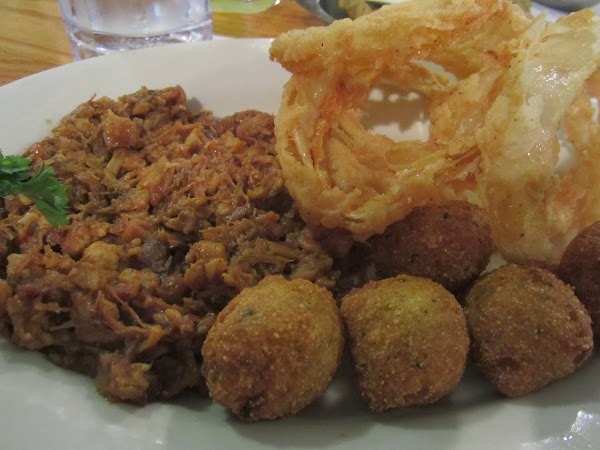 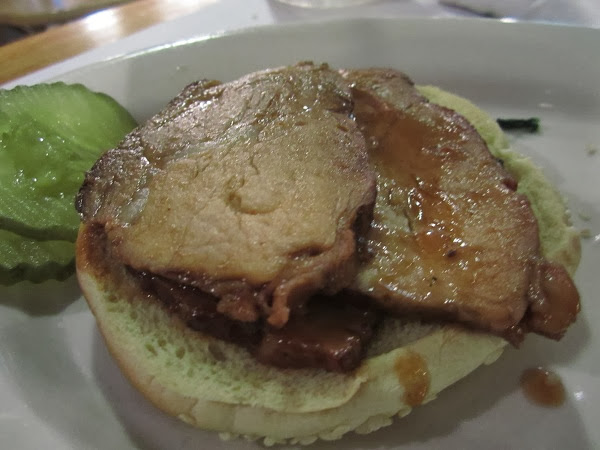 Much of the day-to-day business of the restaurant has passed from Herb and Helen Gibson down to their sons, Dave and Vaughn. As the local economy has stuttered – the copper mines don’t employ the numbers that they used to and a big Levi’s plant has closed – the restaurant has incorporated far more than just barbecue to stay afloat, and they’ve parlayed their celebratory status on the NCBS Trail and the attendant tourism, not to mention the whitewater rafters who need something to eat, into a gift shop. So there are steaks and catfish and trout on the menu, and a large salad bar. Since this appears to be the only restaurant on the 25 mile stretch between Ducktown and Murphy, they want to draw everybody in. 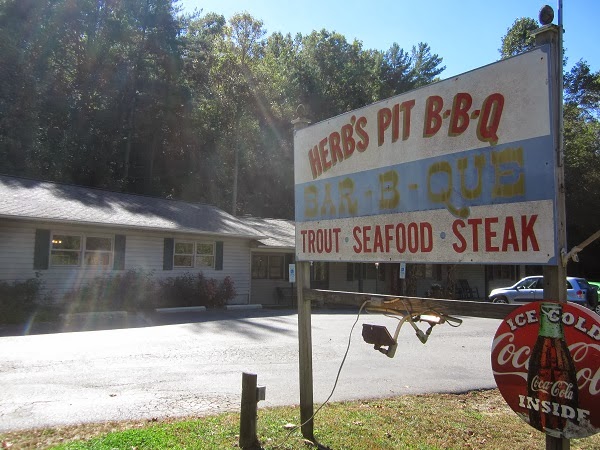 We found the service to be disagreeably unhurried, but the pork was pretty good. Going back to that story in the first paragraph at The Arrogant Swine, the barbecue here doesn’t seem to have anything to do with the associations that I have with the state’s barbecue culture. Chopped or sliced, the meat is cooked in the sauce, which is a sweet, red-brown blend of tomatoes and vinegar. I associate a pink vinegar sauce with Lexington barbecue, and a more clear vinegar sauce with a little pepper with eastern NC. Red-brown, I was not expecting. The sticky, gooey chopped pork was similar to what you see almost all around Bibb and Houston Counties in middle Georgia and had no smoke taste to it at all, and the sliced pork was just a little smokier, but the flavor was still buried by the sauce.

This is a tradition that I will never understand. For the benefit of newcomers, I’ll clarify that I have no single preference in the cut of meat, or the wood used, or the type of sauces provided, because, at least on a conceptual level, I am equally interested in every region’s take on barbecue. Nothing makes me roll my eyes more than some snob who thinks that their region does it “real” and everybody else is “wrong.” The traditions of Texas, Kansas City, Memphis, and eastern North Carolina, and all parts in between, are equally fascinating, equally wonderful, and often equally tasty. But cooking meat in the sauce is a warning flag. I’ve had a handful of very good, and possibly stellar experiences with the cooked-in-sauce tradition, but far, far more meals that were just plain mediocre. Herb’s meat doesn’t rise above “pretty good.” If this is genuinely the only restaurant west of Shelby to make it onto the NCBS Trail, it makes me nervous what we might find one day in Henderson, Franklin, or Waynesville. (That said, Luella’s in Asheville serves very good barbecue indeed, and far better than this, although this is a much newer restaurant and I don’t think it qualifies as “historic” for the NCBS.)

With service so slow and meat that’s just pretty good, the only thing that saved the experience from just being a pretty drive through the mountains were the sides. Now, these were just exceptional across the board. Everything tasted fresh and tasted awesome. The onion rings were fantastic, good and crumbly like the ones at Sprayberry’s in Newnan, and the fried green beans among the best we’d ever had. Marie had some amazing potato salad and the girlchild loved the baked beans. The hand-cut steak fries pleased everybody. The salad bar looked pretty good as well. I could name you more than a half-dozen barbecue joints in the Atlanta suburbs that would be improved tremendously with sides this good. If you’re looking for a good salad bar and some sides, Herb’s is probably worth the trip. If you’re looking for good barbecue, however, there are better places in north Georgia. More on that subject in tomorrow’s chapter.

*Does anybody else out there pick up their feet to avoid tripping over the state lines, or is that just my family?