This was the first time in possibly forever that I was stymied twice in a search for barbecue and had to take a third choice. I’d call it ridiculous, but when we eventually made it to Mike’s, everything turned out okay.

We had started the day with a long and pretty good lunch at Herb’s, in the hills west of Murphy, and planned for a small second stop back down the road in McCaysville as we returned to Georgia. We had passed a Sonic in that town and returned there first to buy dessert drinks for Marie and the girlchild. Marie had one of her beloved grape slushes and our daughter a strawberry milkshake. My dessert was going to be a barbecue sandwich at a place called Georgia Boy’s, but fate had other ideas. 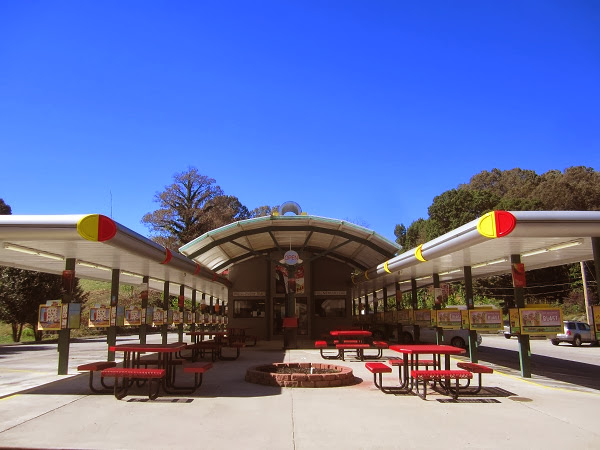 Apart from all of the apples and the art festivals, one of the main tourist attractions in Fannin County is the Blue Ridge Scenic Railway, For $46 a head in October, guests can spend an hour climbing the thirteen miles from Blue Ridge to McCaysville and Copperhill, two hours eating and looking at nicknacks and geegaws, and an hour returning. We arrived at Georgia Boy’s just as the train was getting ready to return to Blue Ridge about 12.45. The staff was very apologetic, but the sold-out train had wiped them out of food. One gentleman, I could tell he wanted to laugh, but he also didn’t want to be disrespectful or dismissive, either. “They came on us like locusts,” he said, explaining that they should have remembered the train schedule and prepared enough food, but they didn’t, and the evening’s food wouldn’t be ready to come off the grill for another three hours. I told them that was fine, and that I’d find something in Blue Ridge.

Our next stop was Mercier Orchards, which we first visited last November. No disrespect to these awesome people, but if it was crazy then, it was sheer lunacy on this trip, with unbelievable crowds. It was worth it for the sparkling strawberry cider, which is amazing, and the completely delicious Fuji apples, but the toddler was really made unhappy by all the people during the half-hour we were here.

Prior to making this drive, I had been aware of two barbecue places in Blue Ridge: Joe’s, and Mike’s. A billboard near Mercier alerted me to a third: Blue Ridge Mountain Bar-B-Q. We decided to head there, but found that restaurant so mobbed that we couldn’t find a parking place in either of its small lots. So we moved that one to the “return later” list, and made our way into the downtown area, where a big arts festival was being held. October is kind of big in Fannin and Gilmer Counties. We parked in the last available space in a church’s lot and walked a few blocks down to the train tracks, resolving along the way that we’d simply have to return to this great little town when there are fewer people and the baby’s not about to explode with exhaustion. 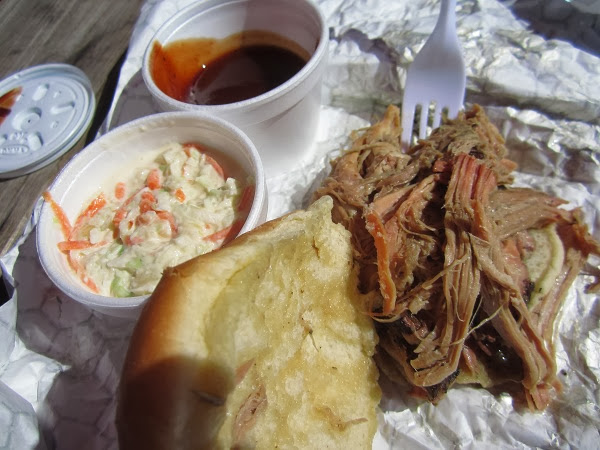 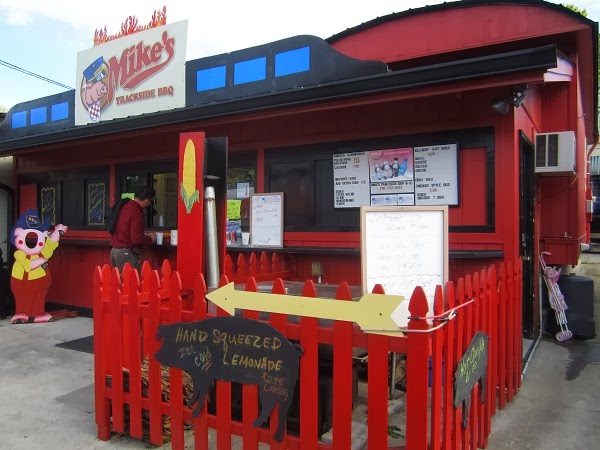 Mike’s Trackside BBQ is set up to take advantage of the train riders, and happily, they were more ready for this weekend’s mobs than the fellows we had visited on the other end of the line. Their smoker is set up in front of the little carry-out window – there are three picnic tables and a couple of benches, and you can take food and drink on the train as well – and they sell pork and chicken sandwiches, one of which, called a Haystack, comes with melted pepperjack cheese.

They sell a sandwich with a side for between seven and eight dollars. Shoulders are smoked for ten to twelve hours here, and the pulled pork is moist and mildly smoky. They have a single sauce available, a thick and sticky brown sweet sauce. I thought it tasted good, and better than what we’d had for lunch at Herb’s earlier, but the mayo-based slaw was fairly tasteless. The girlchild asked me for a second sweet drink since, despite the 79 degrees, she figured that she needed some hot chocolate with a mountain of whipped cream. On cooler days, as the leaves turn orange, I bet that would be nice to take on the train.

I thought that we’d see the train off with a wave as I finished my sandwich, thinking that the baby would like that. How wrong a dad can be. He didn’t understand why we couldn’t board the sold-out blue train, and as it left the station, he convulsed with tears, bellowing “My train, my train!” His sleep-fighting lunacy meant that we could not shop for fudge at Three Sisters without calamity, nor wait in the line for the 300 flavors of milkshake at C-Bolt without incident. We thought that we could let him run around an aisle at E. Quinn while we hurriedly scanned the shelves, but he hit the floor, wailing, and was carried out bellowing “My bookstore, my bookstore!”

As crazy as Fannin County was, Gilmer was even more so. This was the first of two weekends where they hold the Apple Festival in Ellijay. We thought we might take home some fried pies, but the exits or turns to both Walker’s and to Panorama Orchards were jammed up with ridiculous lines of cars. Between them, we smiled at the huge mob looking for what is most likely the area’s best barbecue, at Poole’s. The baby slept like a log during all this. Next fall will be every bit as nuts in the mountains, but if we make it here again, hopefully he will be a little less of a handful. Then again, if we come some other month, we might can get some barbecue and fried pies as planned without such trouble!