Before I forget, should you ever find yourself leaving Dahlonega and traveling east to Cleveland, you’ll probably find yourself on GA-52, with the mountains beautiful and soaring on your left. There are twistier and curvier roads in Georgia, many of them, but this one is just twisty and curvy enough to make you feel alive. It’s wonderful. Doesn’t reading that just make you want to go to north Georgia right now? I love this part of the state.

A little more than a year ago, I made a little pact with myself about barbecue joints. I decided that if the restaurant had “rib” as part of its name, then ribs were what I needed to order. I have felt very strongly about this, ever since I went by Thomas Rib Shack in Tuscaloosa when I circumnavigated Alabama and left just knowing in my heart that the chopped pork that I enjoyed was simply not as good as the ribs that I did not order. So I knew before we pulled into the southernmost location of Rib Country that I would order ribs. Would you believe that Marie had the chopped pork and that it was much, much better? 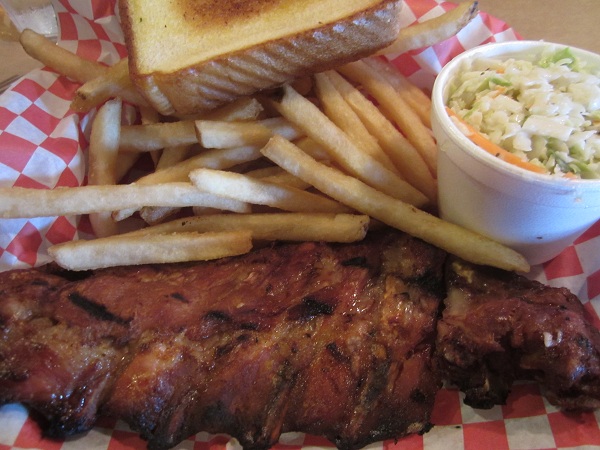 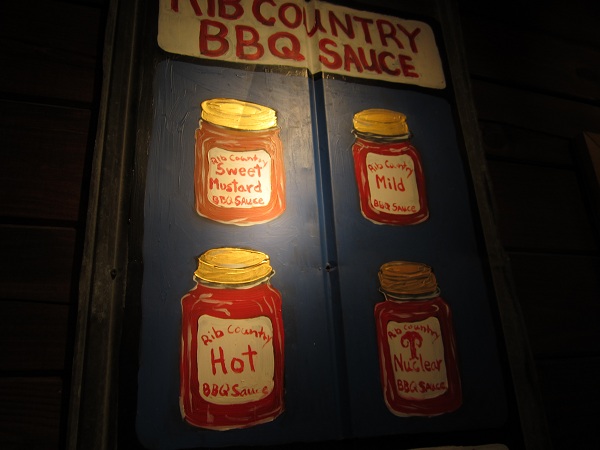 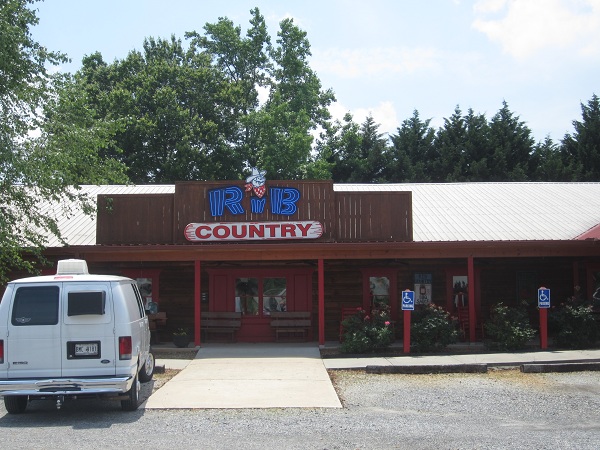 Rib Country is a barn. It’s a huge place with seating for a hundred, bottled sauces, T-shirts, and hats. There’s a big porch out front with rocking chairs and loud country music piped from speakers. The restrooms are gigantic; you could fit the entire dining room of Gainesville’s Hickory Pig in between two sinks. The Cleveland location is the newest in the chain and opened a little more than five years ago. I believe that the first store is the one in Hayesville, NC. Two others are in Murphy, NC, and in Blairsville GA, and they are all said to be packed to the rafters on Sunday evenings, their busiest night.

When we left Dahlonega, I sent a text to our old friend Matt to let him know we were on the way. He and Kelley did not have much free time to join us, owing to a late afternoon appointment in the Atlanta ‘burbs, but they made it up for a pretty good meal before skedaddling. I figure “pretty good” is a fair average, because the chopped pork was very good and the ribs were, charitably, not. The least expensive option to enjoy the ribs is a ten dollar plate of baby backs, served with fries and either beans or slaw. I’d have preferred a simple three-bone small plate or “sandwich,” but these aren’t options; if you want full-sized spare ribs, it’s a $17 plate. Matt and I agreed that the ribs simply tasted overcooked. His were wet and mine were dry and neither were worth writing about any longer.

The chopped pork, which the ladies in our party ordered, was much better. They get the balance between moist and smoky just right. Our server was uncertain whether the ribs are cooked over gas and the other meats over hickory, but that might account for the disparity in quality. The sauces are a good mix of a brown mild sauce that’s already on the table, and mustard, hot tomato-based, and really hot tomato-based which they’ll bring out at your request. Marie reports that they all go well with the chopped pork and, since the fries are frozen and tasteless, it’s amusing to find the right sauce to use as a fry dip before giving up.

Kelley and Matt helped themselves to some blackberry cobbler for dessert and said that it was wonderful, but I had another snack in mind for Marie and the girlchild. The last time I was out this way, we stopped at Mountain Fresh Creamery and I knew that Marie would love it. She was done with barbecue after two stops; the girlchild passed on anything to eat at this second restaurant, and I chased the baby around Mountain Fresh’s great big cow while they snacked. Mountain Fresh makes some truly excellent ice cream, but I’m glad that I didn’t indulge, because the final stop on the afternoon’s tour was the mindblower, and I’d have hated to have missed a bite because I was full of ice cream.

Other blog posts about Rib Country:

(I can’t find any bloggers who have visited the North Carolina stores. Leave us a comment if you have.)