It has been my experience that the very best barbecue joints tend to have some buzz. They have a reputation, built up over years and commemorated in newspaper stories and magazines and books and blogs and oral histories. These are the ones that barbecue lovers like me anticipate for years before sampling. I’ve been fortunate; every one of the old and/or celebrated haunts that have come with such high expectations have met them. Scott’s, Old Clinton, Brick Pit, Bar-B-Q Shop and so on; in every case I had read for ages that these were amazing, and every one satisfied.

Far less common, although not a shred less pleasing, are those occasions when I pick a place about which I know nothing whatever, based on nothing more than geography and convenience, and stumble into a gobsmackingly good meal. Big Marv’s in Scottsboro was one of the very rare examples of this happy accident. Southern Smoq in Flowery Branch is another. Located equally distant – about five miles – between I-85 or I-985, about half an hour north of Spaghetti Junction, this place is quietly serving up some of the best pork and brisket in north Georgia.

You guys, it’s terrific. And it’s okay that nobody’s heard about it yet. It’s only six months old. 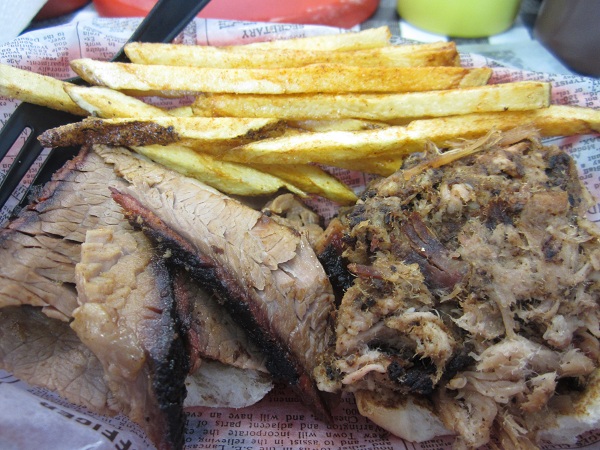 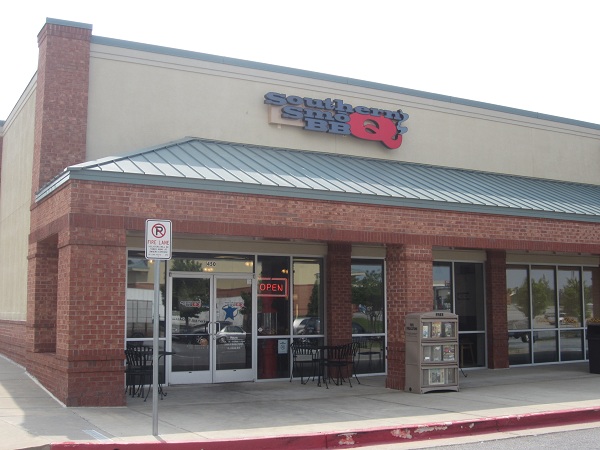 Like quite a few restaurants in the region, this is a place whose owner, Steve Starnes, has a background in the competition circuit. He’s come up with a recipe and a rub that reminded me in a very good way of the nearby Jack’s Old South in Braselton, but, as good as that is, this is even better. The pork is somewhat moist and sparkling with spices. The brisket is not so adorned, but also really flavorful. The fellow who took our orders and brought the baskets to the table told us that they use red oak for heat and smoke and that they opened in January.

I was predisposed to enjoy Southern Smoq because they offer slider sandwiches. This is the perfect way for guests to sample several different flavors in one visit. Everybody should do this. That the meats were all so flavorful and tasty was just an added bonus.

Incidentally, the meats come from a butcher shop right across the street. It’s possible that Southern Smoq might have chosen this presumably more expensive space in a Kroger shopping center to be close to their butcher shop, Block and Blade Fresh Daily. By a neat coincidence, this shop also carries milk from Mountain Fresh Creamery, which we’d visited about an hour previously.

And then there’s the sides. Marie had thought that she’d called it a day after two sandwiches, a side, and a cup of ice cream at the previous three stops, but she decided to try a cup of Meme’s potato salad, sharing it with the baby. She hurriedly passed the cup to me. “You just have to try this,” she said, knowing that really good potato salad, which has too many calories for me, just breaks my heart. There I sat, totally lovelorn, sharing an order of really good hand-cut fries with my children. The fries were good, but that potato salad was stunning.

We picked Southern Smoq because we expect that later in the year, we will be making one or two trips up and down I-985 / US-23 to North Carolina, and we might want to grab more convenient and interstate-accessible places along this stretch on those occasions. Since it’s almost six miles off the highway, I decided to get it out of the way. Best decision ever. I have an unfortunate habit, on days with three or more barbecue meals, of stumbling into the best one first. That didn’t happen this time. We ended this tour on a really high note and found a place that I’d like to revisit sometime soon.