I feel that I must again express my disappointment that rural Alabama is so poorly covered by those of us who blog about food. I see that we have quite a nice audience, even if the transition to WordPress and our own domain means that our stats have taken the stumble that I heard would happen, and I’d like to think that many of our readers are adding restaurants that we have featured to their personal wishlists. Having said that, however, nothing would be better for either small communities or the independent restaurants there than blanket coverage from lots of bloggers, particularly when the restaurants that need championing are ones that serve up a product as good as the pulled pork at Big Marv’s. I applaud the restaurant for using social media to communicate with its fans, but I’m disheartened that Google searches don’t suggest that anybody else is using social media to talk about the restaurant. This needs to change.

Two weeks ago, Marie and I added three more restaurants to our collection of 140-odd barbecue joints in the southeast. They all served up some pretty good food, but Big Marv’s was, by leagues, the best of the three. Those of you who follow us for the barbecue reports, seriously, get over to Scottsboro, because this is something really special.

Marie and the children missed out on this stop. I dropped them off at the Unclaimed Baggage Center for a morning’s shopping. Marie, who had seen the store’s selection of iPads on our first trip, had decided that she would use some tax refund money to buy herself one, and had spent the five weeks between our two trips here pacing the floor waiting for the return visit. The Unclaimed Baggage Center really is something to see. It’s like a department store-sized thrift shop, basically, only with a critical difference. Your typical Goodwill is full of second-hand stuff that nobody wanted anymore, and this place is stocked with things that nobody intended to give up.

While the store is incredibly neat, and full of things like iPads and baby clothes and teenage girl clothes, I have been trying to reverse the clutter flow into our house – we have a baby; this is a losing battle – and didn’t wish to add to the problem. So I dropped them off and continued along AL-35 about four miles west of town. You can’t escape the sense that Scottsboro’s brightest days are behind it. Between all the closed plants and factories and bowling alleys, this looks like a community that the stricken economy hit incredibly hard. Several national fast food chains have pulled out, leaving behind little guys with smaller overhead. Where AL-35 meets AL-79, Marvin McCormick – who is indeed, as advertised, a big guy – has set up shop in a small white building, doing takeout orders and smoking up some some fantastic food. 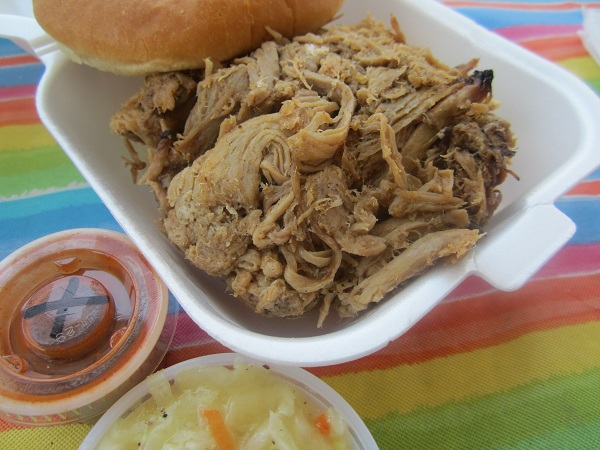 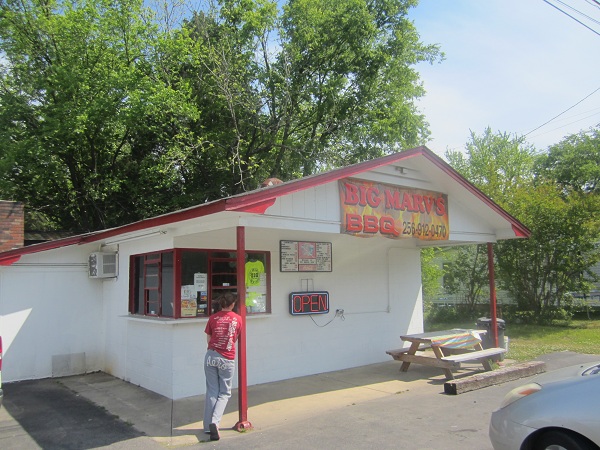 Knowing that there was much more food to come today, I kept it simple and just had a sandwich and a side of slaw. As is the case with most of the restaurants in this region, in the Memphis fashion, pork sandwiches are served with a small scoop of slaw unless guests ask for it on the side instead. They serve an unusually thick vinegar slaw here. It’s quite tart and tasty.

But good barbecue is all about the meat, and this meat is something amazing. I’ve been thinking about this for a time, and, if you’ll forgive a paragraph with a lot of qualifiers and tomfoolery, I think about it this way. While I have, honestly, had better barbecue from several places, these meals have always been from places with some fame and attention. Surely everybody with an interest in barbecue in the southeast has heard of, for example, Brick Pit in Mobile or Old Clinton in Gray or the Bar-B-Q Shop in Memphis. It makes sense that visitors are guaranteed a good meal at these places, or at least they should get one, because the restaurants have a formidable reputation and a lot to live up to. With that in mind, I don’t know that I’ve ever had barbecue this good from a place I never heard of before. Big Marv’s wasn’t even my first choice! A week before we left, I selected another barbecue place in the Scottsboro area, but then I visited their web site and saw a prominent ad showing off their sponsorship for a noxious, toxic, hateful radio show. I actually appreciated them doing that, as it spared me from giving them any of my money. Big Marv’s was a last-minute course correction.

But I was telling you about the meat. It is smoked over hickory, as the overwhelming majority of meat in Alabama still is, although I did not write down how long Marv smokes it. (Readers from the Cotton State may be shocked and appalled to learn that a pretty solid number of Georgia barbecue restaurants that we have visited lately have transitioned from hickory to oak or to other wood to cut costs.) The result is absolutely right, with the meat having a very light flavor of smoke and a lot of tasty juice. The balance between smoke and moisture – the x- and y-axes, if you will, is impossibly hard to get just right for every taste, but Marv nailed it for my own. The best meat doesn’t need sauce, we all say, and this doesn’t. The hot sauce is a thin, red, vinegar-and-tomato blend, served in the same infinitesimally small plastic cups that I saw the previous month at nearby Mary’s and at Tate’s. I implore you, good readers, order this meat dry. The sauce is wonderful, but use it sparingly. Just a splash is all this pork needs.

I thanked Marv and made my way back toward town. We had several more restaurants to visit, among other destinations, and we heard many stories, enjoyed some good food, and learned some fascinating tales that I will share over the next few days, but this would prove to be the best meal of the day. It’s easily among the four or five best barbecue meals that I’ve enjoyed in the great state of Alabama, and heartily encourage our readers to swing by for a visit.

And to talk about it. That, too. Word needs to get out.